One of the most unique platform-puzzle experiences ever.

Posted By Leonid Melikhov | On 26th, May. 2013 Under Article, Reviews | Follow This Author @Rengarious

Fez is an interesting platformer and pixelated beast. This is one of those unique games that truly rely on their astounding gameplay mechanics and style, rather than your usual run’n’gun shooting or basic platforming with simple puzzles. Fez is almost a genre of its own.

Fez is unique when it comes to its overall looks, sounds and themes. The game is set in an old-school pixelated world that looks like it’s from the late 80s and early 90s. For the kind of game Fez is and what it’s trying to convey, the overall style is beautifully crafted and it’s fun to be in it. What I absolutely adore and love the most about Fez is it’s fantastic old-school video game music. The music and sounds remind me of when I was young and how I used to play real challenging games on my precious Super Nintendo Entertainment System. Fez is almost like a blast from the past, but instead it’s new, fresh and feels fantastic. 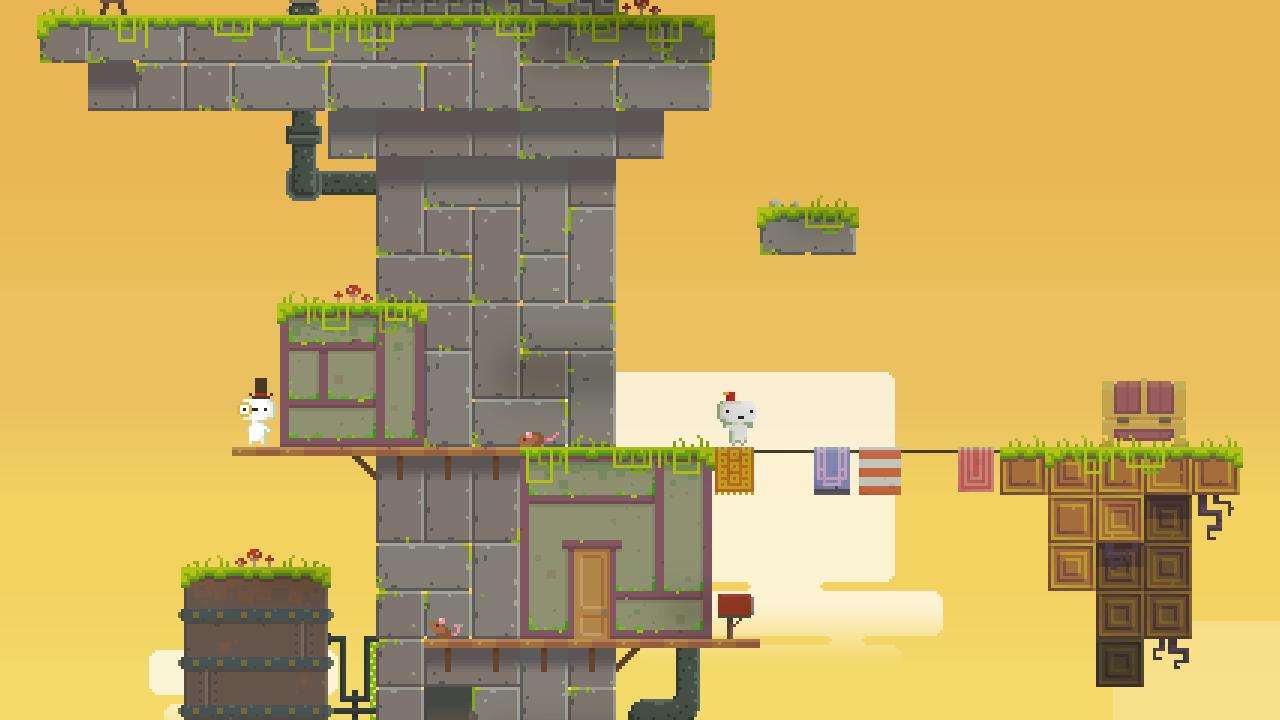 The story in Fez is quite simple. At the start of the game you’re in your village and you come up to your neighbors and when you talk to them they make fun of themselves, how flat looking everyone is and how the world is 2D dimensional, and there is no such thing as 3D. A few moments later, a catastrophic event happens where a magical cube blows up in space, and multiple pieces become scattered across the world.

After the explosion, the world reveals itself as 3D and everyone is fascinated, and your objective is now to find all the missing cube pieces and get them all together. It’s a small interesting story that is perfect for this kind of game.

This is where Fez shines the most, the gameplay. Whoever has come up with the game design for this phenomenal platforming title deserves 10 million platinum medals. This is one of the most innovative games I have played in years. Fez gameplay relies on heavy platforming and dimension switching which is the fun part. Fez tries to look like a 2D game, but in actuality it’s a 3D game with a heavy emphasis on 2D platforming.

By pressing A or D the player is able to shift the dimension left or right. For example if you’re going straight, and you end up hitting a corner and you need to make a turn, you press A or D to change the perspective and continue walking around the object. It’s an innovative design because this is how majority of the game’s platforming puzzles are solved. Everything in Fez is completely 3D, and all you need to do is utilize the perspective change to get around in each of the levels. 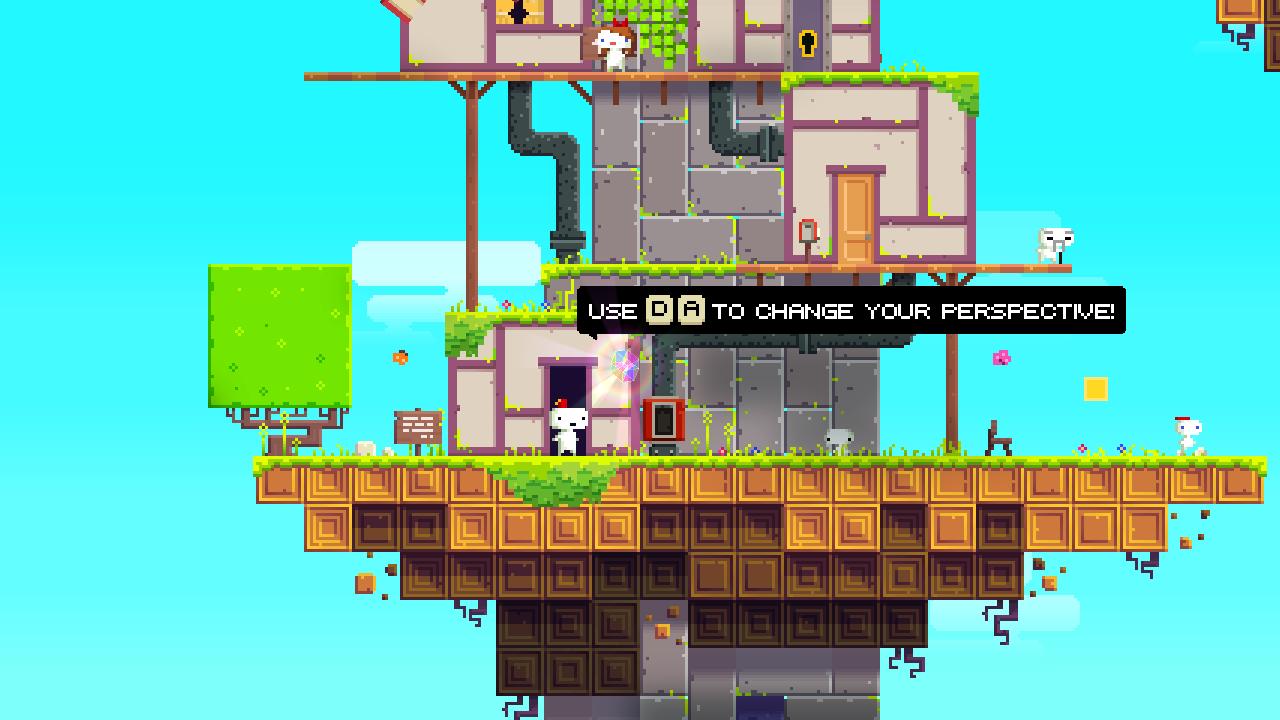 Throughout the levels, you will encounter many different puzzles that are both easy and difficult to solve. In one of the levels, I was forced to use bombs to get to the top of the tower and into the next door. The bombs were used to break certain parts of the building so I would be able to use the debris to my advantage and climb higher and higher.

The tricky part was that I had to a figure out a way on how to break the beaten up walls across the entire building by using one bomb. So what I had to do was switch to the different side of the building every-time an explosion was hitting the corner of the building so that way the explosion would continue across all sides of the tower until all the walls were detonated. 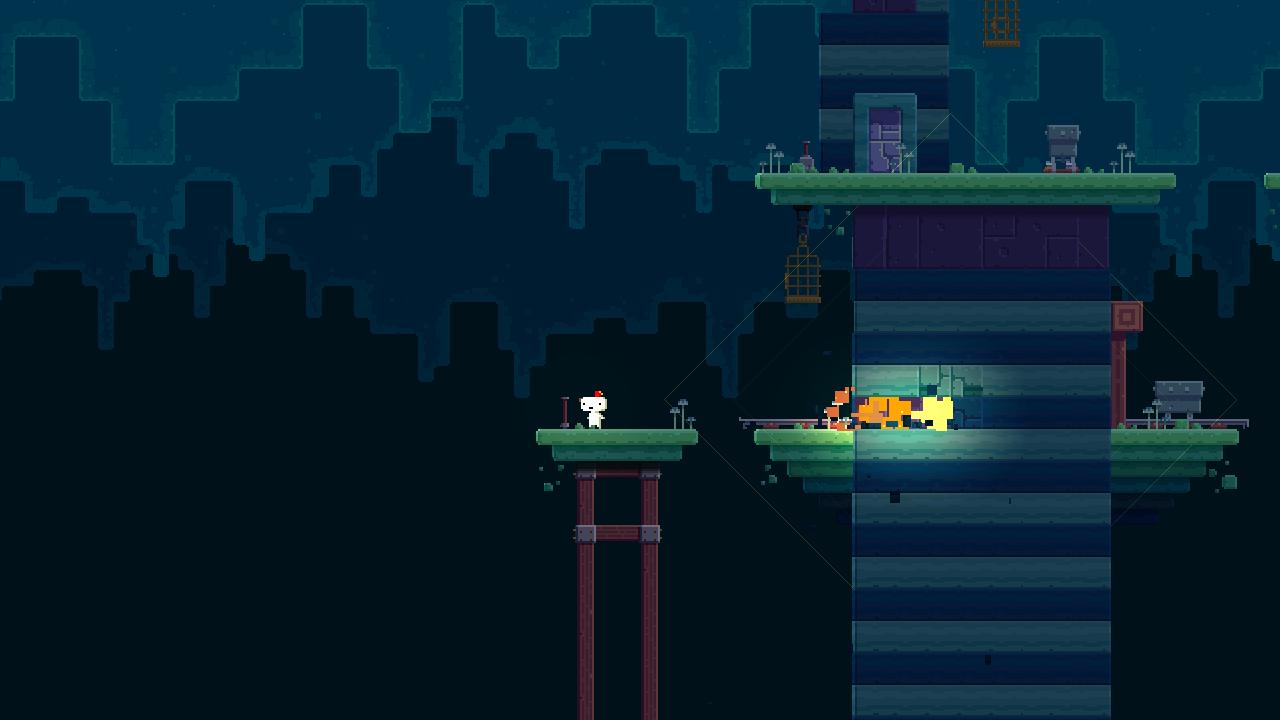 You’re main objective in the game is to collect cubes to open up new doors that lead the way to new worlds where you can collect more cubes. Meanwhile, the player will also come across many secrets where things are well hidden, however; those types of secrets are optional and are not necessary to continue the main story of the game. If you’re trying to collect everything that exists in this game, then good luck to you because it will be very difficult unless you use a secret walk-through guides or YouTube videos.

Fez’s gameplay is not only fantastic because of it’s mechanics but also because of the game’s atmosphere. The old-school soundtrack of the game and the graphics really create a unique gameplay experience of a classic hardcore platforming puzzle solver that is rare to come by. While this may seem as if I am talking about presentation it actually does add to the gameplay and makes it more fun. 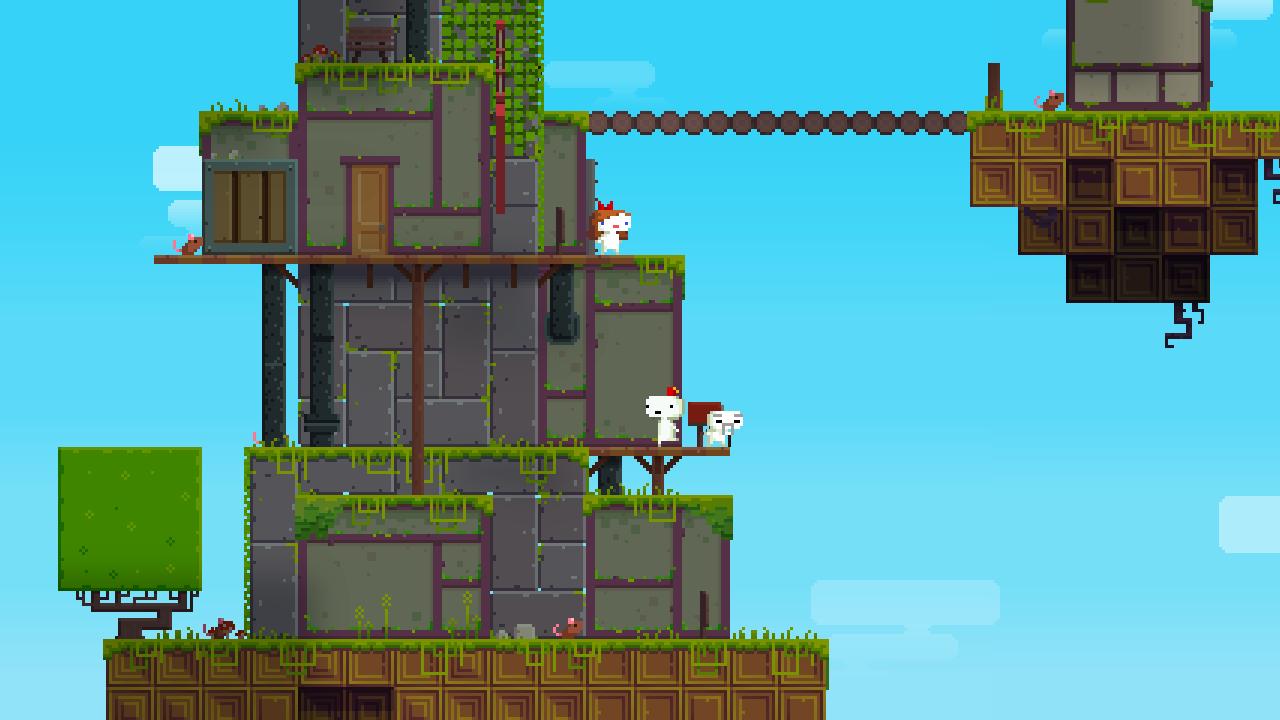 Fez is a marvelous innovative achievement that I believe every gamer should play at least once. The game is a unique experience unlike anything else. The developers did a fantastic job with the game’s design and style. Starting with a simple story, fabulous soundtrack, beautiful pixelated graphics and creative gameplay mechanics make this one of the best indie games of this year. I highly recommend Fez to anyone who is looking for a special experience, crazy puzzle-solving and a fun game to play.

Fez is a fantastic game that combines a great art-style, soundtrack and amazing gameplay mechanics that truly innovative

A copy of this game was provided by developer/publisher for review purposes. Click here to know more about our Reviews Policy.
Tagged With: FEZ, Fez PC, Steam