FIFA 13: Here’s Why You Should Look Forward To It

FIFA 13 is the latest installment in EA’s prestigious football franchise which is set to hit the shelves on Friday 28th September. But what do we know about the game so far?

First let’s take a look at FIFA 12, the current version of the game. FIFA  took the lead in sales again during the 2011/2012 season once again, beating Pro Evolution Soccer to the punch. EA improved the gameplay mechanics of the game, making player clashes seem more real. They also tweaked the dribbling to help you get more out of the skilful players. Overall FIFA 12 still has a lot of playability but with FIFA 13 round the corner, you can bet the die-hard football gamers will be upgrading to that.

The news on FIFA 13 so far is that players’ physical appearances have been improved, with their faces getting a touch-up as well as body parts getting more attention to detail. This all adds to the great visuals you get pumping through your HDMI cable in to your TV.

As for the gameplay, dribbling has once again had another tweak with the emphasis yet again being on getting the most out of skilful players and getting the gamer to master the art of dribbles.

Players of FIFA 12 will know that free kicks were a weak area. Unless you were in shooting range and were one of the few people who have mastered them, free kicks were uncreative and not much of a benefit. In FIFA 13, EA have given them a revamp with a much greater variation in what you can achieve if you’ve been fouled. You can fake kicks and crossing the ball in will be more effective.

Here are some of the improvements in the game:

One of the first things to do at FIFA 13 was to implement a more realistic ball control.Now it will be more difficult to control a receiving ball with your player.It all depends on the strength, the speed, the ball height and the technical skills of your player to achieve the control of the ball and run with it.

Another feature that got improved is the player impact engine.There will be no more unrealistic animations in the players challenges!The engine has been optimized and new a set of impact values has been added at the hip and the upper body area.

In FIFA 12 you could dribble just by changing direction,in FIFA 13 this won’t be possible anymore!

The free-kicks got a new free kick system.Up to three players can now gather around the ball and make fun of the opponent’s defense and goalie. You can now feint a direct shot and adjust it to a player who comes off the wall. Also the defense set pieces have been improved to go with the new free kick system.For example, you can make a defensive team with more players into the wall and send out a player to block the ball.

The offensive Artificial Intelligence got a huge improvement. The CPU-controlled players got better running routes and better guessing options of where you pass the ball.Also the strikers are smarter and move with the offside line of your defenders,waiting to receive the ball and run with it towards your goal post. 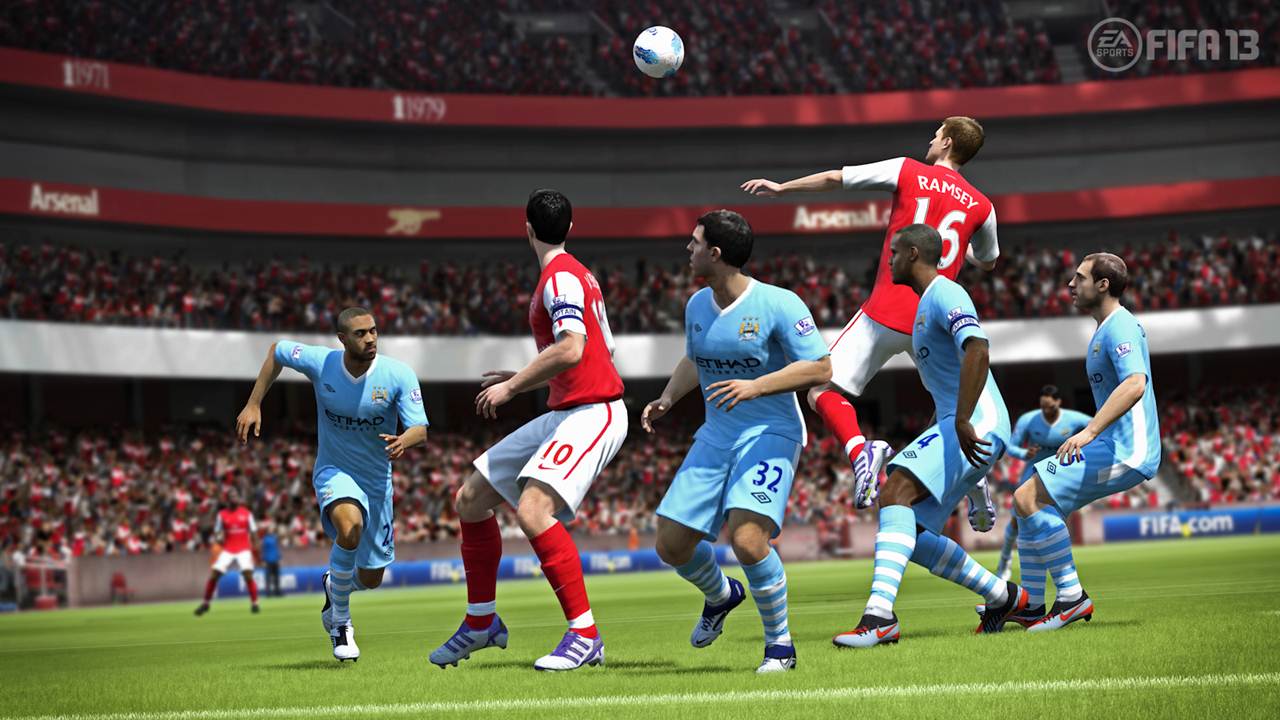 The developers have also made an attempt to get the gamer more involved with the first touch feature. The ball no longer automatically sticks to your players when you pass it to them. The gamer now needs to interact with the game to receive a pass.

EA’s FIFA spokesman David Rutter has also promised that the game’s AI will actually help you attack better this year. He pointed out that at times in FIFA 12 your players didn’t intelligently help you attack and often strayed offside. This year, they will be more intelligent, keep themselves onside and actually feel like they’re a useful part of your front line.

Defending has also been addressed. With the new adjustments to first touch, gamers may decide they need to boot the ball out for a throw-in if their player doesn’t have enough skill. Players can also push and shove as well as slide tackle to get the ball.

It looks set to be a great game again so expect a massive sales as they stayed true to the formula again.