It’s not hard to maintain the lead once you reach the top unless you colossally mess up, and EA Canada has shown exactly how not to mess up by creating another fantastic football experience that does justice to all the games released before it.

FIFA 09 was the start of the mini revolution by EA where the franchise just kept getting better and better, almost sort of creating a monopoly when it comes to sales, and for a good reason too. There’s quality, content, and a fantastic online experience that its closest competitor PES finds it difficult to match.

This year’s PES has thrown down the gauntlet; did FIFA respond with equal enthusiasm? Of course it has.

You know, it’s very difficult to keep innovating every year, the yearly release schedule makes it very difficult. What is possible, however, is to maintain the quality while adding more content and value to an already fantastic existing package. Not to mention, finding ways to make the game look gorgeous.

That isn’t tough though, because FIFA 13 is the best looking football game in the market. With PES switching to Konami’s next-gen engine ‘FOX’, it’s will be interesting to see how EA can outperform it in in the future, especially  in the visual department with crispy, accurately detailed character models and venues. 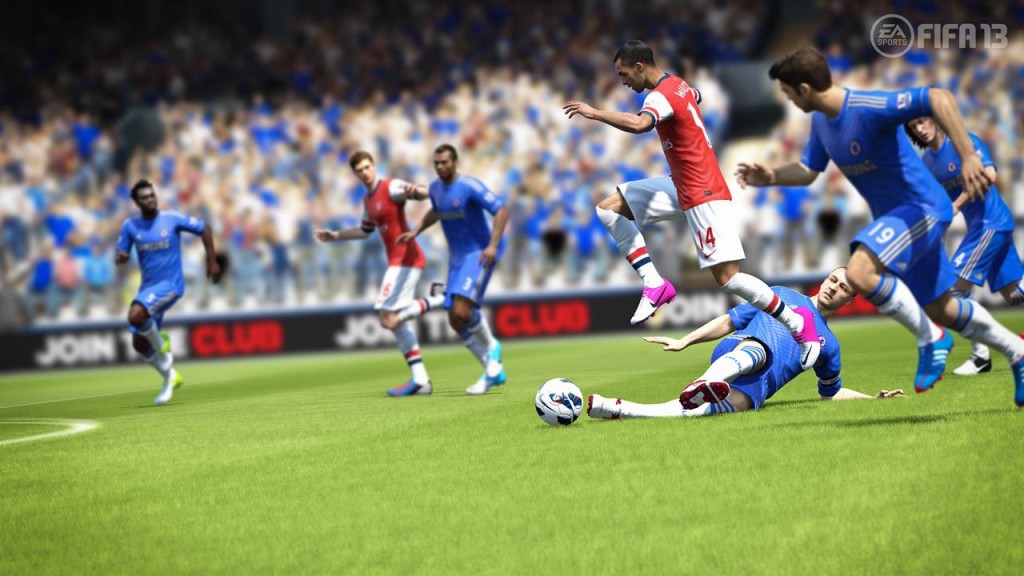 The physics engine is unbeatable, too, offering fantastic life-like animations, which really immerses the player into the game. This is one of the reasons why FIFA keeps delivering every year. They really put a lot of emphasis in the animations, and try to improve the physics as much as they can.

Base game remains unchanged, which is understandable, but disappointing nonetheless. Yearly release schedules is something I perceive to be very negative for this industry. But companies have got to make money somehow, right? When FIFA 12 has managed to shatter previous sales records with over 15 million shipped, it’s hard not to capitalize on the demand. 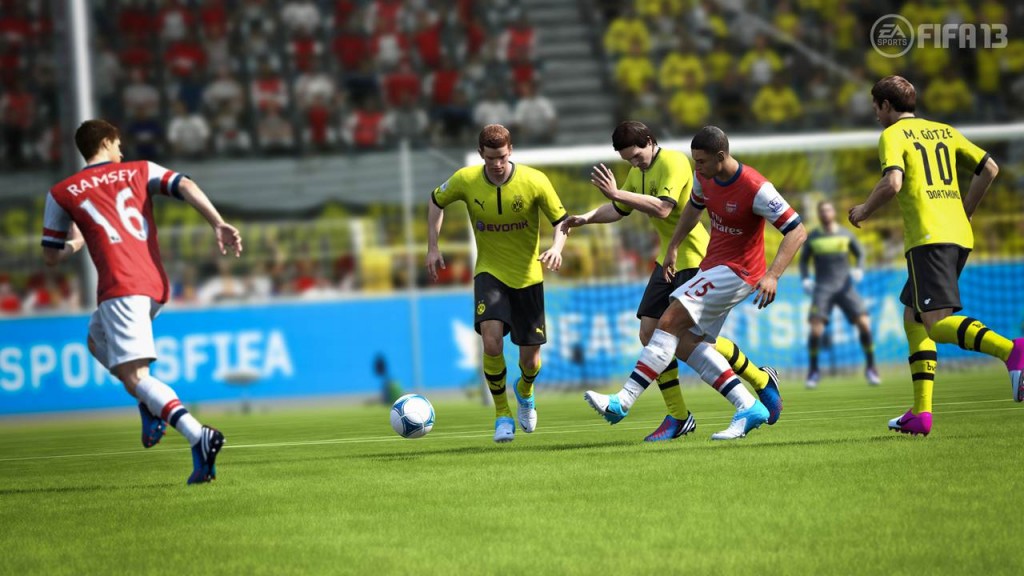 It’s not as if I’m giving it a free pass due to that. EA Canada has actually tried a lot to improve this year’s iteration with a bunch of new game modes and graphical upgrades. So much that, it really is a good improvement over its predecessor. Having interviewed EA Sports’ Nick Channon, the amount of passion this team possesses to keep innovating and raising the bar is clear.

One of the best additions to FIFA 13 are the ‘Skill games’; this is purely optional and not competitive at all, and is just meant to be something you just play while lying on a couch lazily. Sort of like mini-games. Who doesn’t love them? It also makes you more proficient at the game by teaching you the gameplay mechanics in a personal way.

For example, I learned some new things about penalty taking and how and when to put the ball in a specific area. You also accumulate points while doing this and there are different difficulty tiers to test your skills. You can also play them while the match loads and it really becomes a fun distraction. Never stop playing football is a good mantra, isn’t it? Different categories like Shooting, crossing, penalties, dribbling etc. will keep you busy for a while. 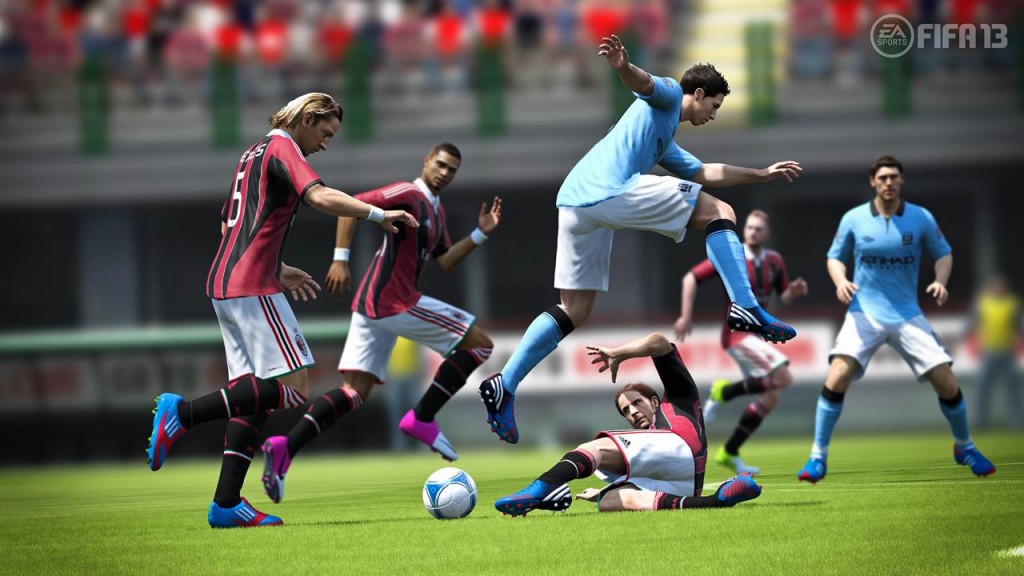 The netcode this year is quite good, and I didn’t really face too much lag online. It’s normal for EA servers to collapse on launch day to the sheer amount of players that try to log in, but it’s quite stable now, and it seems EA has improved its infrastructure a bit as well. You will still face some issues with lag but that’s normal since you can play with people all over the world.

This is one area I’m not that satisfied with but it’s an improvement over FIFA 12 for sure.

The dribbling animations has been enhanced and it’s actually fun to do some crazy things on the pitch. While it comes to pure gameplay, it’s a bit similar to last year’s installment but with added pace to the game. I wish they’d reduce it but that seems unlikely at this stage. Slight learning curve aside, the gameplay is quite accessible.

Having got the PS3 version for review, I couldn’t test the Kinect implementation. It sounded cool but I think it’s a way of keeping me sane. Nothing against Kinect here, but if you want some detailed impressions on it, you best wait for our Xbox 360 version review. Almost all the modes from FIFA 12 are back including the fantastic Ultimate Team mode, that I bet 99.99% *cough* of people who bought the game are playing right now. Head-to-head seasons is now known as ‘Seasons’ in this game, and it’s the same thing plus added co-op. 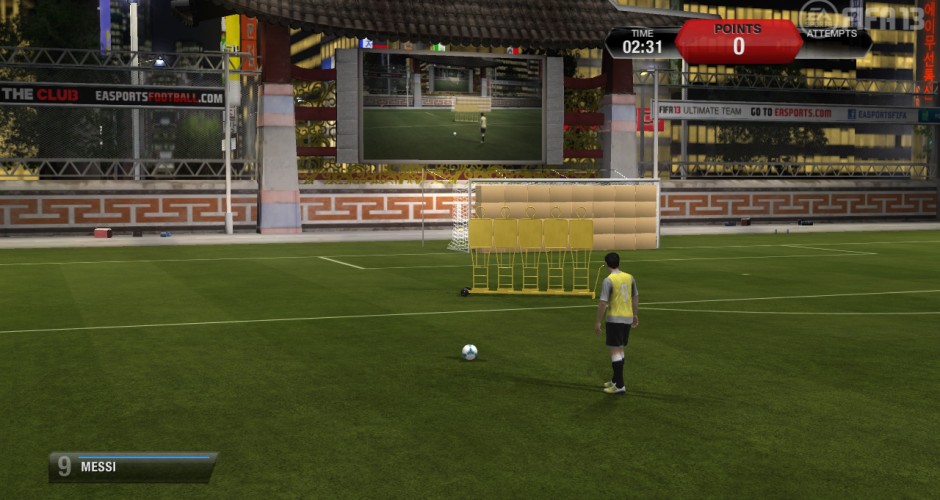 Career mode, Pro Club Seasons and EA Sports Football Club are, well, self-explanatory. They can be time consuming but quite exhilarating too. There’s enough content here to last you till the next installment of FIFA which, no doubt, would feature a ton of new improvements.

As the next generation looms, we may see an upgrade of astronomical proportions, but for now, what we have is a football game that delivers what fans want, and has enough content and improvements which is vital to be considered as a progressive installment.

Stays true to the tried and tested formula. Skill games are incredible. Lot of content and modes. Multiplayer is fantastic. Dribbling has been improvement. Visuals look great.

Slow menus are annoying. Netcode could require some work but it's good nonetheless. Not a massive improvement over FIFA 12.

Final Verdict:
SUPERB
What we have is a football game that delivers what fans want, and has enough content and improvements which is vital to be considered as a progressive installment.
A copy of this game was provided by Developer/Publisher/Distributor/PR Agency for review purposes. Click here to know more about our Reviews Policy.