FIFA 16 may not look dramatically different to last year’s version but under the hood there are certainly enough enhancements to justify a purchase.

The tension is mounting. It all comes down to this moment. Ahead of me, the opposition goalkeeper moves from side to side, gesticulating wildly and attempting a crude imitation of Bruce Grobbelaar’s infamous spaghetti legs wobble (check the 1984 European Cup final on YouTube if you don’t remember). The controller vibrates, the power bar builds… and I sky the ball over the cross bar and into the crowd beyond!

Thus ends my first experience of FIFA 16’s new game mode, FUT Draft. After winning several fraught matches, my run ends with a whimper – massively frustrating but enough to draw me in to yet another year of football addiction.
Think of this new Draft mode as an epic cup run – a series four increasingly tough matches, where the prize fund grows the further you progress. The new addition to the hugely popular Ultimate Team removes some of the usual grind and tests your team building abilities by immediately offering up a selection of some of the most ludicrously skilled players on the planet. 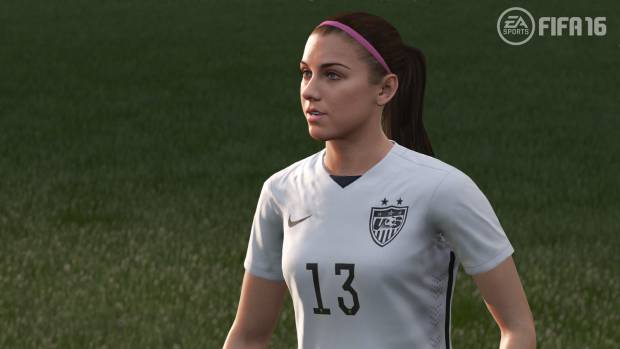 "You need to select your Captain from the first five cards on offer, and then go ahead and build a team around them. Sounds simple, eh? Not so much."

The only slight snag is that it costs a princely sum to enter: 15,000 coins, 300 FIFA points or one of the “Draft tokens” that occasionally appear in packs. Still, at least you tend to cover your costs even if you don’t progress too far, with decent prizes (typically a couple of Gold packs) awarded even when you’re eliminated from the competition. What’s more, you can play either off- or online – but bear in mind, the greater rewards come when you face real opponents across the globe.

After picking your preferred formation, a series of screens conjure up a randomly-generated selection of players. You get to choose the ones you want to fill each position on your team, with a few more to put on the subs bench – that’s 23 in total – and a manager. For many of us, it will be the first time you’ve ever been able to field a team with the likes of Ronaldo, Messi, Neymar and Aguero in your ranks – and it’s a good way of scouting potential transfers target too!

You need to select your Captain from the first five cards on offer, and then go ahead and build a team around them. Sounds simple, eh? Not so much. It’s a real balancing act between snaffling all the top players and doing your utmost to ensure the chemistry rating remains high. Tough decisions need to be made; the more successful teams often led by the head rather than the heart. Remember, chemistry wins games!

With the team selection out of the way, it’s time to kick off. 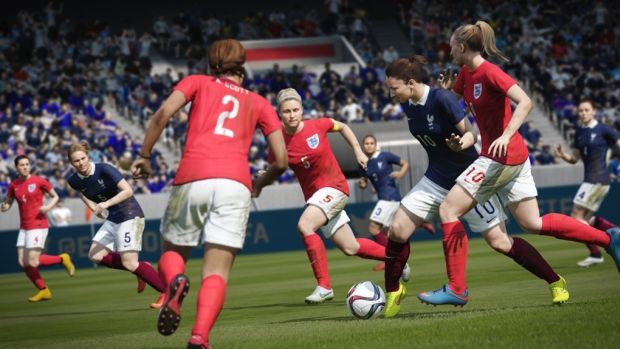 "Far from being simply a politically correct reskinning effort, the women’s teams play differently too – games feeling pacier and almost more free-flowing compared with those featuring their male counterparts. I’ll admit to being a little dubious about whether a few female teams would add much to the overall FIFA package, but I’m pleasantly surprised with the end result."

Despite that penalty shootout costing me a place in the fourth and final game in just my first attempt, my winnings – a Jumbo Premium and standard Gold Pack – rewarded me with a few decent players to add to my Ultimate Team roster. I even got a Legend on loan (Spanish striker Emilio Butragueno). But what a buzz.

I reckon EA has scored a stunner with FUT Draft – providing us diehard players with a novel new mode to keep us coming back for more. And it’s just one of many changes made to this year’s update. Stealing the headlines in the build up to FIFA 16’s launch was EA’s inclusion of a selection of Women’s National teams for the first time, recognising a rapidly growing part of the sport.

Far from being simply a politically correct reskinning effort, the women’s teams play differently too – games feeling pacier and almost more free-flowing compared with those featuring their male counterparts. I’ll admit to being a little dubious about whether a few female teams would add much to the overall FIFA package, but I’m pleasantly surprised with the end result.

There are 12 teams featured: Germany, England, Brazil, USA, France, Australia, Spain, China, Sweden, Canada, Italy and Mexico – all available in Match Day, Offline Tournaments, and Online Friendly Matches. Sadly, they’re unusable in Ultimate Team and Career modes – and it’s not possible to test the battle of the sexes and match them up against the guys! Still, there’s always next year. 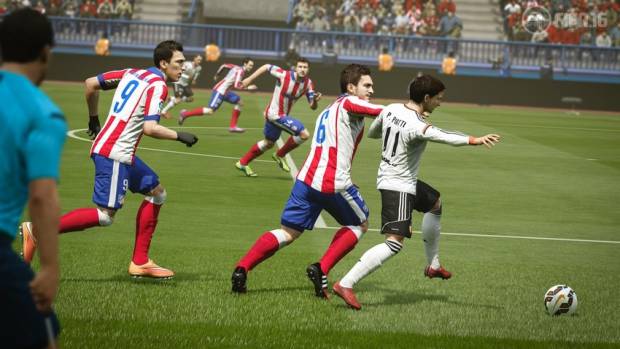 "FIFA 16 is a far tougher affair than its predecessors, and requires skills to be relearned and a slower, more cerebral style of play employed. Gone are the days of belting up the pitch with a Walcott or Aubameyang and thumping the ball in the back of the net."

Gameplay-wise, FIFA 16 seems perhaps a little too familiar at first glance. The early games don’t seem particularly revolutionary; in fact, beyond the obvious changes mentioned above, it seems little more than a copy of last year’s effort. Sure the visuals look a little better, there’s some new commentary and the teamsheets have been updated but it seems to be more of the same.

Delve a little deeper, however, and there are plenty of noticeable tweaks. Those expecting to grab the controller and achieve the same successes they did with FIFA 15 from day one will be disappointed. This year’s edition is a completely different ball game!

There’s a whole raft of new skill games designed to hone your skills, as well as a nifty graphical overlay – dubbed the FIFA Trainer – that can be toggled on or off depending on preference and shows the button options available to the player you’re controlling. It’s a cool take on the usual instruction manuals and tutorial videos, and – although a little distracting – really helps you get to grips with the controls. Hell, it helped cut down the number of fouls by improving by tackling percentages and enabled me to score a few glorious free kicks – and that can’t be a bad thing.
Another couple of innovations are the driven passing and no touch dribbling – the former allowing you to pelt fast, but controlled, passes to your team mates to instantly open up defences, while the latter sees you feint, shimmy and shield the ball – to distract opponents and draw fouls.

FIFA 16 is a far tougher affair than its predecessors, and requires skills to be relearned and a slower, more cerebral style of play employed. Gone are the days of belting up the pitch with a Walcott or Aubameyang and thumping the ball in the back of the net. Players blessed with speed and acceleration are still beneficial but by no means essential this time round. Instead, the focus has shifted to build-up play and more measured passing. A nicely-balanced team of players with a strong physique and decent ball skills is now far more preferable than pace alone.

Lofted through balls and crosses – often my Achilles heel in FIFA 15 – are far less effective now, as are those crunching slide tackles that have very different results this time round, often leading to a straight red and a trip to the dressing room.

Defenders seem much improved this year too, no matter their rating, always managing to gain ground on one of your goalbound strikers. Even the most mediocre of defenders you come to face with seem to be blessed with the tactical awareness of a Nesta or Baresi, making it really tough to pass through the channels or pull off effective crosses.
A real bugbear historically has been the erratic goalkeepers but they’re far better now too, often pulling off phenomenal saves and really looking the part. Everything from their reactions, awareness and positioning means they’re far more likely to determine the outcome of a match than ever before.

The presentation, visuals and animations are typically spot on. All of the top players have accurate player likenesses, the weather effects are decent and the commentary is pretty seamless – although occasionally inaccurate and glitchy.
Though Ultimate Team will arguably remain one of the most popular game modes, there’s plenty more on offer. Single matches can of course be played and co-op leagues entered, and Pro Clubs makes a return too – the usual hectic affair where you can try your hand at 11 vs 11 matches. There’s also a new Interactive World Cup option right now too – letting you rise the ranks online and take on the world’s best to win some pretty decent prizes. 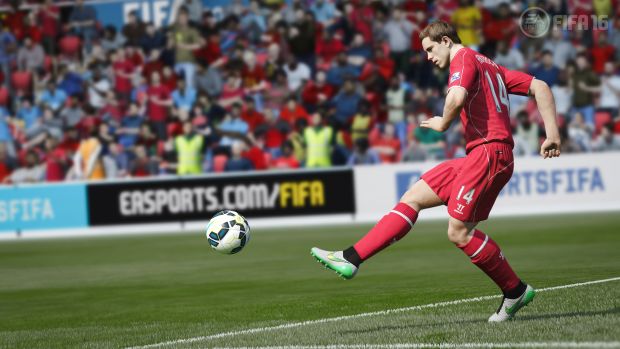 "FIFA 16 may not look dramatically different to last year’s version but under the hood there are certainly enough enhancements to justify a purchase."

Career mode has a couple of new features as well – pre-season tournaments not only let you try out players and tactics but lets you earn some additional funds for your transfer budget. Training drills also let you enhance the skills of some of your players and their attributes. There are also some welcome changes to scouting, transfer dealings, the signing of free agents, and there are also more loan options than before. All in all, it adds to an already comprehensive offering and should sap many hours of your life.

Each year, a lot is made about the FIFA-PES rivalry – about who is the rightful heir as the king of football games. On the one hand there’s the long-running mega-selling FIFA series – full to the brim with licenses, broadcast-like visuals and fast-paced arcadey gameplay… and then there’s PES – the more “accurate” alternative, based on careful build up play and precision passing, albeit a little rough around the edges. Fanboys will no doubt continue to staunchly defend each camp and argue about the respective qualities.

FIFA 16 may not look dramatically different to last year’s version but under the hood there are certainly enough enhancements to justify a purchase. New modes are welcome and addictive, while tweaked gameplay does result in a more realistic and complete game of football. As addictive and frustrating as ever, there is certainly plenty of keep you busy until next year’s instalment.

Top notch presentation and a raft of new game modes make this a firm favourite for football fans. Hugely addictive both alone or with friends.

Gameplay changes may prove divisive among fans of the series as new skills need to be learned and old techniques revisited. Can be hugely frustrating and tricky to master.

Annual update of the beautiful game is a winner.

A copy of this game was purchased by author for review purposes. Click here to know more about our Reviews Policy.
Tagged With: EA Sports, fifa 16, pc, ps4, Xbox One