FIFA 17 Review – Smoother And Sharper Than Ever Before

FIFA 17 is comprehensive and fun to play.

The football season’s underway and as sure as night follows day, EA has released the latest version of its mega-selling FIFA series. With rival PES proving a worthy competitor these past few seasons, EA appears to have pulled out all the stops to stay at the top of the table.

Headlining this year’s release is the move away from EA’s in-house Ignite engine to Frostbite – notably used for first person shooters like the Battlefield series. It seems a good move too, resulting in a cleaner, sharper looking game with extremely fluid animations and realistic looking players. The lighting, stadia and weather effects look great and the pitch churns up nicely over the course of a match.

Facial scanning has played a part in FIFA for some time now but the effect is even more impressive this year, with a greater pool of lifelike players now appearing in the game. And don’t get me started on the sweat effects – a small detail but it’s so cool how the beads of sweat gather on the players’ virtual faces as the game progresses. Oh and managers can now be seen gesticulating wildly on the sidelines too.

"Input from the likes of Harry Kane, Dele Alli and Marcus Rashford – all up and coming Premier League stars – means there’s a compelling narrative to the story and a sense that this is what a young player breaking into the big time might actually experience."

Frostbite also means a unique story mode could be introduced, drawing us into a world beyond the football pitch, from locker rooms to the manager’s office.

Admittedly, the E3 reveal of “The Journey” left me a little cold. Although it was a first for a franchise, the mechanic had featured in plenty of other sports games in recent years – often with mixed results. The single-player campaign element is a typical rags to riches tale, putting you in the boots of a young lad and steering him through setbacks and successes as he tries to make it to the big time. Would shoehorning a narrative element into the long-running series really work? I wasn’t so sure.

Fortunately, it’s actually pretty damn good – and somewhat revitalises a game often criticised for not changing enough each annual update. Thanks to two years in development, the new game mode proves to be a really polished affair and a nice alternative to just playing matches ad infinitum.

Input from the likes of Harry Kane, Dele Alli and Marcus Rashford – all up and coming Premier League stars – means there’s a compelling narrative to the story and a sense that this is what a young player breaking into the big time might actually experience. While being careful not to reveal any spoilers, the tension of the trials, trying to force your way into an established team, the intensity of victory and the misery of defeat is nicely captured and offers an entirely new experience to the series. The voice acting and cut scenes are excellent, and never overbearing – and there’s not too much waiting around in between actual gameplay. 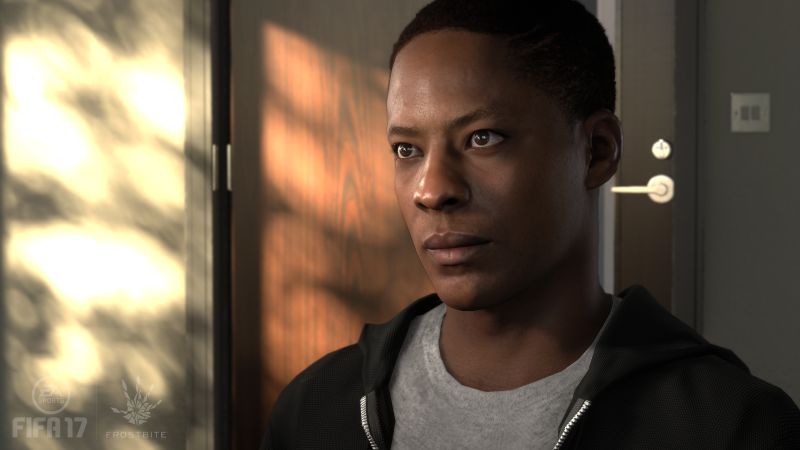 "Attribute points are earned along the way and can be used on a skill tree to unlock player traits, and mould Hunter however you like, be it a pacey, physical striker or a creative, super-skilful midfielder."

At times, the actions of family, friends and fellow players present you with dialogue decisions and just like Mass Effect or Deus Ex, your chosen responses affect your path. Responding aggressively, for example, may gain publicity and popularity among the fans but will not endear you to the manager. Your choices determine your direction – and it succeeds in making the mode feel so much more than a scripted story.

The tale of Alex Hunter serves not only as a decent narrative experience but provides a decent tutorial to the overall game and controls too. After picking your club, preferred position and meeting the gaffer, success in a series of skill games determines whether you make it to the starting XI or have to bide your time on the bench.

When you do eventually make it on the pitch on match day, you can opt to either control the entire team or solely play as Hunter – each offering a completely different experience. A series of challenges appear on screen pre-match – such as having to score the winning goal, impress the boss with a decent display or complete so many passes. Achieving these boosts your earnings, transfer value and helps you gain followers on social media. The better your performance, the more likely you are to cement your place in the first team.

Attribute points are earned along the way and can be used on a skill tree to unlock player traits, and mould Hunter however you like, be it a pacey, physical striker or a creative, super-skilful midfielder. The Journey definitely proves a worthy distraction from the core elements of the game we’re all so used to and EA should be proud for shaking things up this year. Otherwise, there have been four main areas of focus for the developers regarding gameplay: attacking, intelligence, physical play and set pieces. 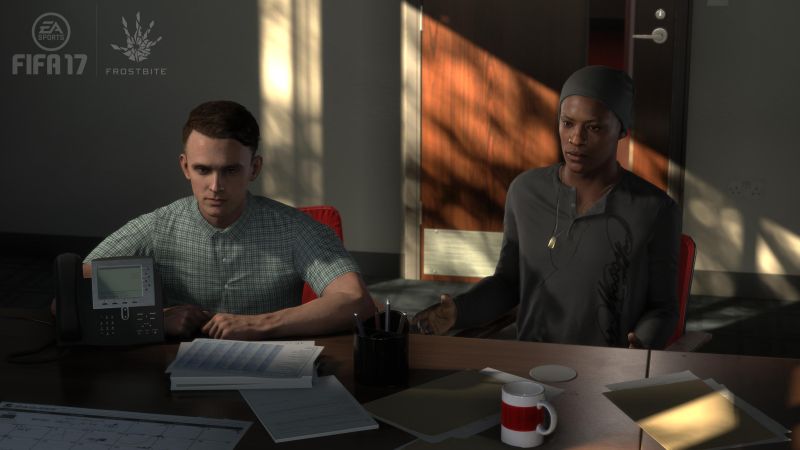 "The physical improvements are welcome too and instantly apparent."

There’s more control now when unleashing a shot or powering a header towards goal – driven kicks, downward headers and threaded through balls mean a lot more variety to your play. If something’s not working against the opposition, then change it. There really feels like there’s a lot more control now, which can only be a good thing.

Team mates are more intelligent, trying to create space to receive a sublime pass or create a goalscoring opportunity out of nothing. It certainly makes for a more fluid, realistic game. The physical improvements are welcome too and instantly apparent. Players jostle and shield the ball more effectively, meaning that a lumbering forward may prove more useful this year than simply relying on strikers blessed with pace and acceleration.

The final feature, set pieces, will no doubt divide opinion and I’m undecided whether it’s an improvement. Free kicks, corners and penalties have been reworked to provide more control but will take some getting used to. Granted, there was nothing more annoying last year than dominating an opponent, only to concede a free kick and see them scoring with ease. Mastering free kicks last year was fairly easy and almost guaranteed goals if provided the opportunity. This year is an entirely different story – the whole process proving far more complex.

Players can now adjust their stance, with fake throws and a new targeting system resulting in loads more variety. It allows you to mix it up and be a bit more creative but it’s changes to the penalties I’m not so sure about…

I bet even returning players will initially be baffled by the new mechanic. Don’t get me wrong, it’s great you can nudge the right thumbstick to move your player to change your run up. But then things get a little trickier. As soon as you move the left stick, you start your run up… and have to quickly adjust your aim. Then it’s down to the shoot button to control the power and elevation. I’ve taken a number of penalties over the course of the review but it didn’t get any easier or result in many goals.

Overall, the gameplay feels a little slower and it’s particularly noticeable if you’re not using a team blessed with superstars. Now this isn’t necessarily a bad thing as it relies more on build up play rather than lobbing the ball over the top and letting a speedy striker latch on to it – but it does require a different way of thinking.

Passes sometimes appear delayed too and the ball all too often gets snaffled away by the opposition before you can offload it. Tackling feels trickier as well and the success rate of a brazen slide tackle has been diminished. It’s hard to win possession and more often than not, chasing down players and nudging them off the ball can sometimes be more effective.

"As a package, FIFA 17 is comprehensive and fun to play. It’s got some great new additions and makes it an essential purchase for any football fan."

Grumbles aside there is absolutely loads of content, with all the favourite modes including Ultimate Team, Career Mode, Be A Pro, and International games that see the return of women’s teams. Online friendlies and co-op mode also provide a decent distraction – but why EA continues to omit the co-op cup run that appeared a couple of years ago is baffling!

If there’s one certainty about FIFA 17, it’s that when The Journey and Hunter’s escapades are consigned to distant memory, it will be Ultimate Team that will continue to sap everyone’s time (and money). EA’s cashcow is back – still addictive as ever and even more comprehensive, thanks to new challenges and competitions. While FUT draft was last year’s innovation, now there’s FUT Champions cup run, with victories in the daily tournaments rewarding entry to a weekend event, and the promise of decent prizes.

There’s also the inclusion of squad building challenges, where coins, packs and kits can be unlocked by trading in the required player cards. Collecting a set of players with a certain chemistry level could earn a Gold Pack, for example, or trading in a selection of Bronze cards could earn a new special edition strip.

More intriguing are the tougher challenges that will reward you with a rare (though sadly untradeable) player if you collect and trade every team in a specific league. At launch you could earn an excellent looking Jonas card (rated 87) and 30,000 coins if you exchange all the squads from the Portuguese league, for example. This has great potential for the addition of special challenges throughout the year.

As a package, FIFA 17 is comprehensive and fun to play. It’s got some great new additions and makes it an essential purchase for any football fan. It looks the business, plays well and has a glut of content to keep you occupied until the inevitable follow up.

Looks smoother and sharper than ever thanks to the Frostbite engine. Tweaks to existing game modes and the introduction of The Journey are welcome and play well.

Set piece overhaul doesn’t quite work – especially the penalties. Passing can occasionally feel sluggish and tackling is a little hit and miss

New game engine, improved mechanics and a story-based campaign prove that the beautiful game can get even better.