FIFA 18 on the Switch is markedly different from the game's main version, but is it any good?

EA Sports’ FIFA franchise has been growing year over year, both in terms of refinements and sales, but for some reason, the series has always given Nintendo systems something of a cold shoulder. While FIFA games have always been top notch in terms of production values and the content they have on offer on the PlayStation and Xbox home consoles, on Nintendo systems it has usually been a truncated version lacking many major yearly improvements. In fact, in recent years, the series hasn’t even launched on a Nintendo system. With FIFA 18 on the Switch, that changes.

But with so many improvements having been made to an already polished experience in the main version of the game this year (you can read our review for the PS4 version here), just how good is the decidedly less full-featured Switch version in comparison? Answering that question is actually harder than it seems. FIFA 18 on the Switch is missing a number of major features and modes that you might otherwise find in the console version of the game, and a lot of other issues hold it back from being as flashy and entertaining as its console counterpart. That said, where it really matters – on the pitch – FIFA 18 is a pretty enjoyable game.

The first thing you’ll notice when you first play a match in FIFA 18 on the Switch is just how good the game looks. The game manages to come surprisingly close to its console counterpart in terms of visual quality, with generally excellent character models, great-looking stadiums and pitches, and smooth animations (barring the occasional hiccup). There isn’t just quite as much detail as we’ve grown accustomed to seeing in FIFA on the consoles in the last two or three years, and the crowds in the Switch version still look ridiculously bad, but overall, the game’s visuals are surprisingly good. 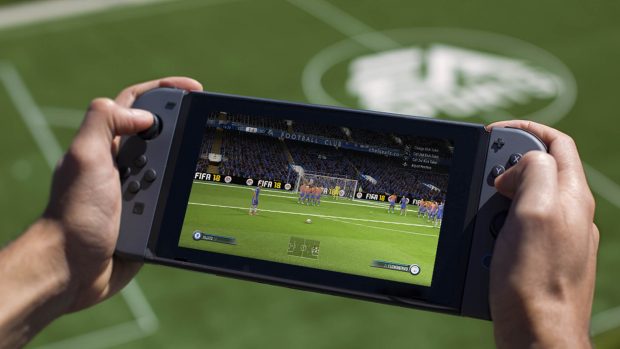 "FIFA 18 on the Switch is missing a number major features and modes that you might otherwise find in the console version of the game, and a lot of other issues hold it back from being as flashy and entertaining as its console counterpart. That said, where it really matters – on the pitch – FIFA 18 is a pretty enjoyable game."

And thankfully enough, so is the action on the pitch, for the most part. FIFA 18’s Switch version has been called the game’s handheld version in the lead up to the launch, and that is more or less accurate. But while handheld FIFA games in the past have been significantly lacking in a number of gameplay improvements, making the gulf in the experience between them and their console counterparts quite big, this year the on-pitch action comes actually pretty close to matching the experience you might find on a PS4 or an Xbox One.

Playing matches feels surprisingly similar to FIFA on the consoles, and the game manages to successfully recreate the atmosphere of a real TV presentation of a football match as well. Of course, the entire experience isn’t quite as bombastic and flashy as the game’s console version. Commentary is, for the most part, as good as you’d expect it to be in a FIFA game, but there are often times when it stumbles a bit as well, like when the commentators go silent for long periods for no reason, or miscued shouts, or mistimed remarks. Crowds are also a problem, as I’ve already mentioned, so the presentation takes a hit thanks to that as well.

That said, there are, unfortunately, a few frustrating issues when it comes to the on-pitch action that hold back the experience a bit as well. For instance, the artificial intelligence here is not quite as good as you might want it to be. Your teammates don’t make quite as many attacking runs as they should, even when the avenues available might seem obvious to you while you’re playing, and as a result attacking in FIFA 18 Switch isn’t as smooth or as silky as it you’d expect from a FIFA game. There’s also the fact that crosses, passes and shots aren’t as accurate as they are in the console version of the game, and neither do they have the same weight to them. As such, matches often become less about linking up passes in the build up to a goal and more about looking to win the ball back with brute force and then running with it at the goal with your fastest player.

Such issues are, admittedly, hard to ignore, but FIFA 18 still manages to retain the addictiveness that the series has come to be known for, and that is thanks in huge part to the Switch’s portable nature. FIFA 18, like all of its predecessors, is the kind of game that you can play for hours at a stretch, but it’s also a game that works very well in short bursts, and the Nintendo Switch version lets players do both those things with great ease. Playing FIFA on the go is an attractive prospect in and of itself, but the fact that FIFA 18’s on-pitch action is, in spite of its occasional inconsistencies, quite enjoyable only makes it better. 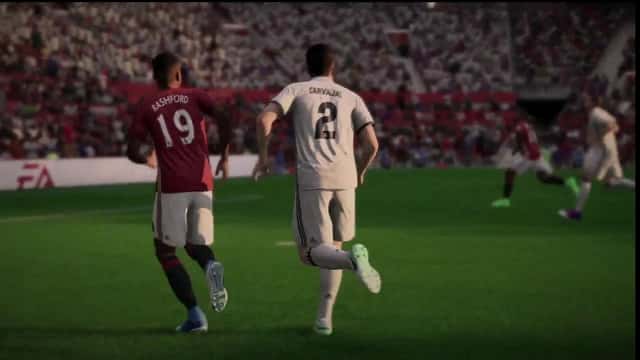 "FIFA 18, like all of its predecessors, is the kind of game that you can play for hours at a stretch, but it’s also a game that works very well in short bursts, and the Nintendo Switch version lets players do both those things with great ease."

Just as the Switch’s portability helps improve the experience, so too do its local multiplayer capabilities. FIFA 18 Switch lets you play multiplayer matches locally with a friend, with each of you using one Joycon each. Owing to a Joycon’s significantly smaller size and closer positioning of buttons, playing this way isn’t as comfortable as playing normally, and there will be certain things that you will be unable to do due to having fewer buttons to play with. But being able to play FIFA anytime, anywhere with a friend is a definite plus, and popping in for a quick match feels incredibly convenient.

When it comes to online multiplayer, though, FIFA 18 falters a little. There is no way for players to connect with their friends via matchmaking, which is an omission that is hard to ignore. Once again, the Switch’s structure and online models is partly to blame for this, but seeing as a large part of the FIFA experience is being able to connect online with your friends for a match, it’s a little surprising that EA haven’t tried to work around this issue.

And that isn’t the only omission either. FIFA 18’s console version runs on the Frostbite engine, just like its predecessor, but the game’s Switch version doesn’t. As a result, The Journey, which has been the headline feature in FIFA for two years and is possible only because of the Frostbite engine, is missing from FIFA 18 Switch, which means that if you’re playing offline, you’ll be spending the bulk of your time in the Career mode. Unfortunately enough, some of the biggest improvements that have been made in the Career mode in FIFA 18’s main version are also powered by Frostbite, so they, too, are missing from the Switch version. It’s not bad- FIFA 18 Switch’s career mode is like the one in FIFA 16, so while it’s still an addictive mode that you can easily sink dozens of hours into, it’s lacking in a number of notable improvements.

The other major mode, which is Ultimate Team, is perhaps the one that has been recreated best. FUT works great in FIFA 18 on the Nintendo Switch, and the gameplay loop that has kept players glued stuck to the game is still very much present here. That said, Squad Battles, which was probably the biggest addition in FIFA 18’s main version this year, is not included in the Switch version, which is a real shame, since it would have fit the game’s pick up and play nature perfectly. 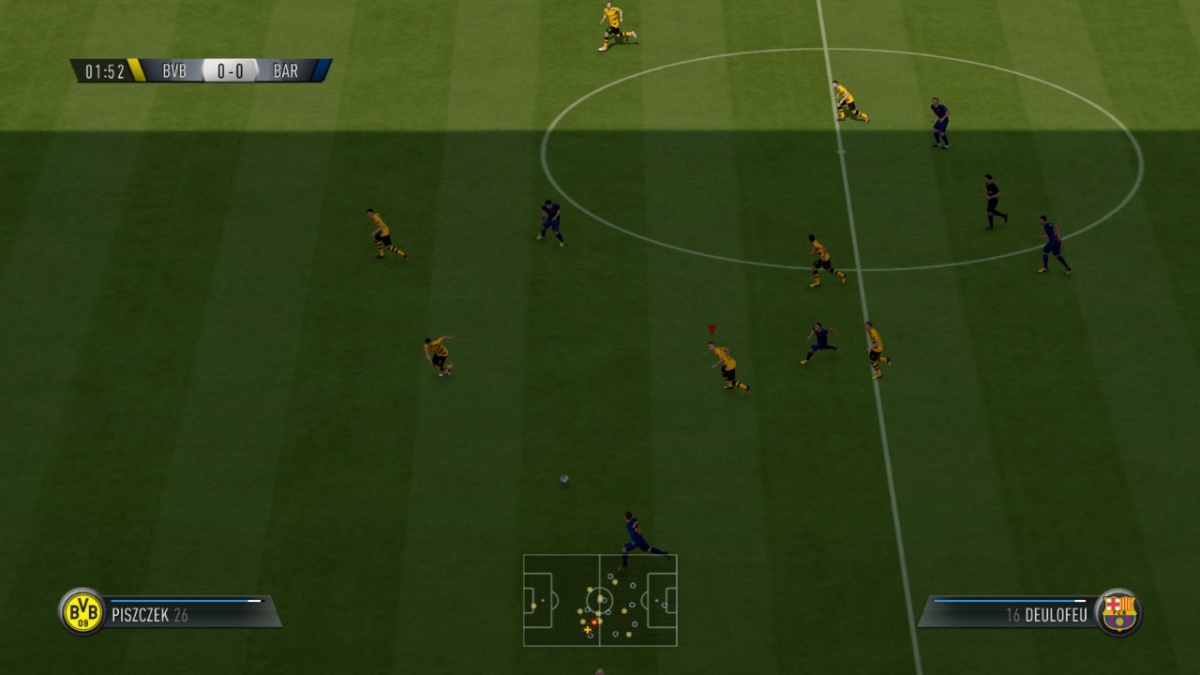 "FIFA 18 Switch’s career mode is like the one in FIFA 16, so while it’s still an addictive mode that you can easily sink dozens of hours into, it’s lacking in a number of notable improvements."

FIFA 18 Switch also suffers from a few bugs and glitches, and these are a lot more glaring in nature than the ones people have come to expect from this series. For instance, there are certain players in certain teams who don’t have their correct facial models, and have instead been replaced by weird, test-pattern placeholders. During the time I’ve spent with the game so far, there was also one match where the game’s textures disappeared entirely, and the players, the ball and the goalposts were being displayed only as blocky hitboxes.

FIFA 18 on the Nintendo Switch, then, is quite an even experience. It’s missing in a number of significant improvements, lacking in an entire mode, and suffers from a few technical issues. However, FIFA is, of course, all about the football, and in that department, the Switch version of EA Sports’ franchise’s latest annual release is a success. It’s not a resounding success, since even the on-pitch action can be inconsistent and occasionally frustrating, but if you’re a fan of the series, this is a game you can easily pour dozens of hours into.

On-pitch gameplay is enjoyable for the most part; Excellent visuals; Switch's portability; Local multiplayer; FUT is quite full-featured; Addictive career mode; Recreates the atmosphere of a football match quite well.

Final Verdict:
FAIR
The experience falls short of the standards that FIFA 18's console version has set this year, but for times when you're on the go or don't have access to the real thing, the Switch version is decent substitute.
A copy of this game was purchased by author for review purposes. Click here to know more about our Reviews Policy.