Well where do I begin when upon putting Fight Night Champion into my console I thought I was going to be playing Fight Night Round 5.  I could not have been more wrong.  The game is more of a total boxing experience that it is just a fighting game.  Now with MMA on the rise you have to ask yourself, even I did wonder why I would want to play a boxing game when I have become much more accustomed to MMA like I am sure many people have.  MMA is one of the most watched sports in the world, but Fight Night Champion really is over the top.  The physics of the game have improved along with the graphics.  The game can go from as simple to the classic ‘Fight Now’ mode to creating a fighters eye brow color.

Right away there is ‘Champion Mode’ which sets this game apart from any other Boxing/MMA game out now right away.  Champion Mode is pretty much a story mode and a quite compelling one at that.  I mean it almost felt like the kind of emotion you would get from a modern day Rocky film at certain points.  Without giving too much away you are at a time in prison, fighting in prison and your goal is to make it to the top.  Spoiling the story won’t make you enjoy it any more so let’s just say it is a good story with twists and turns while you box your way through it.  The only disappointing part of it is that it was short.  I mean, I played on a lower difficulty but playing on a higher one might make it last longer but strictly because of difficulty.  Although short I look at the compelling mode as an introduction to the rest of the game, because that is where it really begins.

First off the controls have changed drastically making it much easier for anyone to get into the game while still leaving veterans of the franchise the tools of the trade.  One major change is blocking, which can be a good thing for you but a bad thing when an opponent is blocking, because it is just one button.  While holding block it automatically blocks where ever the opponent is aiming for.  You can now use the face buttons for punching high and while holding left trigger you punch low.  There is even a Power Punch that leaves more open for a counter and takes a lot of stamina.  Left trigger is also used to dip and dodge around your opponents punches while holding it down, along with moving the left stick.  Now if face button punching is not your thing or you are willing to try something new, there is the dynamic control system called ‘Full Spectrum Punch Control” where you use the right stick to punch.  It can be as simple as pushing the stick in a certain direction on doing a half circle or other combinations to put together some mean punches.  To add to that all the controls are fully customizable to your liking, so the controls should be far from a problem for anyone.  However there is at times a slow down in response time especially when you decide you want to block.  That block button is not always guaranteed  to come right up, depending on what you were throwing.

Now of course there is the ‘Fight Now’ feature where you can play with up to two players or just go against the AI.  You can choose between the ultimate roster of fighters ever.  From current favorites to all the classic fighters like Ali, Tyson, De La Hoya and Holyfield.  After that we have the ‘Legacy Mode’ which is a giant tournament where you start off by either creating a boxer or using known legend of the ring.  As you move up the ladder you will get your chance at the title.  While doing this you can see how popular you are becoming check your rank, stats and messages from your trainer.  During your Legacy career you will also want to train but not too hard especially before a big fight.  All fights can be seen on your fight calendar, past, present and future.  Ranking and ratings work just like they do in real life determining who you will fight depending on who your beat or lose to.  You can even fight outside the ring to add to your reputation, so check your messages from your trainer often.  Adding to the realism, but halting your gameplay are mandatory recovery periods where you cannot train or fight in Legacy mode, but you can take the fight to the other modes or even online when this happens.  When and if you get that belt you will then have a choice to try to continue fighting and hang on to it or retire your fighter at any time.  The Legacy is the meat and bones of the game.  Through out the game no matter what mode I was playing, the game seemed to freeze up for a couple of second on occasion, but it was nothing game breaking.

Now of course there is online multiplayer, but like you have never seen before.  Your going to want to create a fighter and as you fight you will gain XP, the more you win, the longer you last, the more XP you get.  This XP is used to put points into your fighters attributes from head jabbing to speed, to blocking strength, there is a long list to work with.  There is the almighty ‘Online World Championship’ which is an online mode that is not for the weak or inexperienced as this will prove who is the best ‘Fight Night Champion’ there is in the world.  To take it down a notch you can also participate in ‘Prize Fighting’ where winning tournaments will earn you prizes and of course it won’t go unrecognized.  Now the best and most innovative section of the online features has to be the Online Gyms where you can create your own gym or join one that suits your needs.  While in the gym you can spar with other members of the gym with up to 32 players to a gym.  Just like in real life you can learn from other fighters or teach them the tricks of the trade to bring your gym to the top.  This is where Boxing becomes a team sport where you can challenge or be challenged by other rival gyms and win trophies or essentially make your way up the leaderboards recruiting fighters across the globe for a team goal to make it to the top.  You can obviously have different weight classes in your gym or depending on who is made the gym leader make it a one weight class gym.  It doesn’t get much more real and in depth than this. 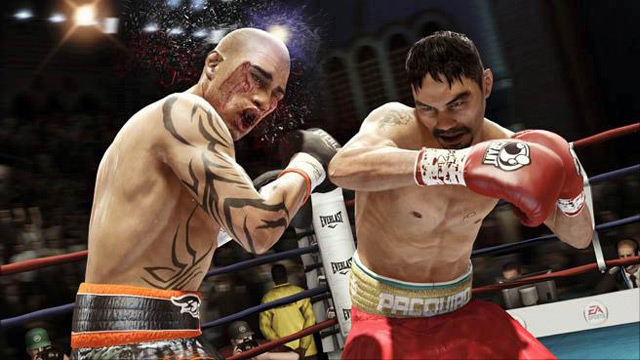 Things can get brutal.

I’m afraid it doesn’t end there as you can record matches, create highlight reels and edit replays of knockouts from whatever camera angle or speed you want.  You can then upload it to you space on the website.  In the media section you can view all the cinematics from Champion Mode, listen to all the music tracks in the game (which can all be customized as entrance themes for fighters) and more.  You can right off the bat just create your own fighter customizing him to the T, or download Mr. T as I saw someone had created and uploaded.  Entrance music, flashes, spark blasts during entrance to the ring and face type, eye color, hair style, tattoos, clothing color are all things you have at your disposable when creating a fighter.  The list is endless though, with no fighter looking a like and you can use them or choose to upload them for other people to use or both.  You can even download a picture of yourself or someone else for that matter as well as being able to super impose your face on the your fighter.  There is not a limit to fighters you can create and you can take them online or use them in Legacy Mode.

The game includes a ‘My Corner’ menu selection where you can view your Highlight Reel if your are deserving of one as well as giving you the option to view any ESPN Classic Fights you have fought.  This area also includes the in game manual, credits, file management, media and settings.  You can save your settings down to the specifics.  There is even a store where you can buy XP for your fighter among other things, but in the end it won’t make you a better fighter.  If that isn’t enough, while connected to Xbox Live there is a marquee scrolling at the bottom of the screen much like ones seen on ESPN.  This brings the scores from every sport and the wins/losses as well as EA Sports Gaming news making this another small but great addition to Fight Night Champion.  You really couldn’t ask for more in a Boxing game when this is more a an experience as close to the real thing as you can get without actually being a boxer.  What’s next?  Adding Rocky to the roster.. hmm.. wait no, let’s not go there.

A whole new experience packed to the rim with features, taking the online mode to the next level.

Some response time when your deep into combos, block especially. Momentary freezing up occasionally. Champion (Story) Mode is short.

This is a boxing game that you not experienced before, bring many aspects together to make this one hell of a package when it comes to a game.. especially a boxing game making it as real as you can imagine.

A copy of this game was provided by developer/publisher for review purposes. Click here to know more about our Reviews Policy.
Tagged With: EA, EA Sports, fight night champion, MMA, ps3, xbox 360