Possibly no other series has redefined and set the standard for its respective genre as Fight Night.  Since the series’ first release in 2004, the series has continued to show the gaming world what a boxing game should be.  Fight Night Round 4 continues in this strong tradition and gives gamers and boxing fans alike an experience available nowhere else.  In the months leading up to its launch, Fight Night Round 4 was easily the most hyped installment in the series.  Round 4 may not have lived up to all the hype, but it certainly gives us a very strong boxing game – likely the best boxing game to date.

The first thing you’ll notice when playing Round 4 is how amazing the boxers look.  From the flexing of individual muscles to the glistening of each bead of sweat, this game looks better than anything before it.  Not only do the boxers look incredible, but there are tons to choose from.  The game’s roster includes 50 of the greatest boxers over the decades, and each of these boxers has been modeled to near perfection.  The boxers have a real-to-life look along with fighting styles that mimic the real boxers’ styles to a surprisingly accurate extent.  As if that wasn’t enough, EA has included a multitude of customization options for creating your own fighter.  With the option to use a USB camera to implement your own face into the game, it is now easier than ever to create a boxer that looks like yourself.  As far as apparel customization, this game offers more brands, colors, and fabrics than any other boxing game thus far. 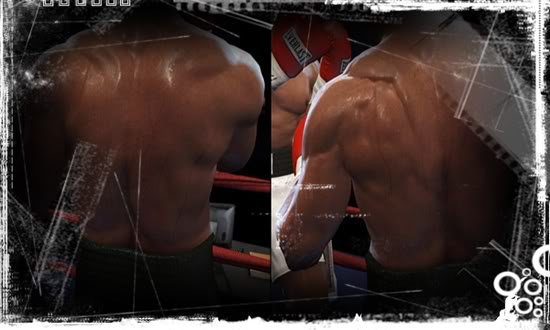 As with any game, looking great isn’t always enough.  The game has to have the controls and an overall feel that lend themselves to great gameplay.  It is without reservation that I can say this Fight Night has the most realistic fighting system that I’ve seen in a boxing game, and it works quite well.  Granted, many gamers (including myself) were upset to discover that the game does not allow the use of face buttons for punching.  All punches, excluding signature punches and low blows, must be controlled with the right analog stick.  Using the so-called Total Punch Control does have a somewhat steap learning curve, but once it’s understood and mastered the game really controls quite well.

In previous installments, the only variables taken into account when punches were thrown were whether or not the punch landed.  In Round 4 this has changed dramatically.  The effectiveness of each punch is affected by the distance away from the other fighter, whether your fighter or the other fighter is moving, the punching accuracy of your boxer, your boxer’s reach and fighting style, as well as your stamina at the time the punch is thrown.  This makes Round 4’s fighting system very realistic and very rewarding.

Round 3’s fighting system was plagued with parrying and haymaker counter punches.  In that system the player could parry any punch, which left the other player stunned long enough to be countered with a devastating haymaker.  Although this was fun at times, the fighting system led to ridiculously unrealistic fights.  In Round 4 this problem has been solved.  Parrying has been taken out of the game.  Counter punching is still a huge part of the fighting system, but counter punches only work when you carefully time either a dodge or a block.  Because the timing has to be just right, counter punches are considerably more difficult to pull off.  This makes the payoff feel that much better when you do land a counter punch.

Another part of Round 3’s fighting system that has been overhauled is the difference between body and head punching.  In previous games, body punching damaged the opponents stamina more than head shots, but that was really the only difference.  In Round 4 this has been changed for the better.  Head punches still damage the opponents health, while body punches still damage the opponents stamina.  However, upon several consecutive body punches (or if the opponent wears themself out by punching and missing too often) head punches damage the opponents health considerably more than when the opponents stamina was higher.  This system was somewhat implemented in Round 3, but it didn’t work nearly as well as it does in Round 4.  This new system gives both body and head punching huge payoffs that work best when used together.  another addition to the health and stamina bars is a block bar.  Fighters who play very defensively and block a lot will now only be able to block a certain amount before their block is no longer effective.  Another interesting aspect to the stamina bar is that while the player is changing the angle at which he is leaning, the stamina bar does not replenish.  This makes players use leaning and dodging punches more judiciously.  When combined, these new aspects of the fighting system do a pretty good job of keeping fights from being predictable and stale. 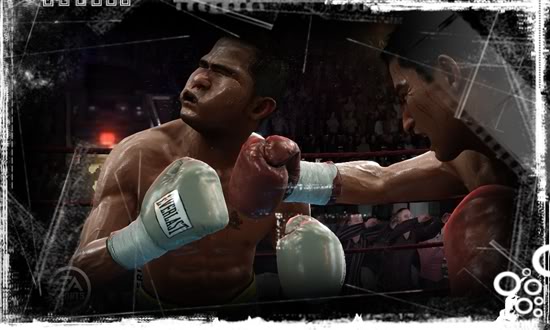 The new system does bring along a few problems though.  The most effective way to diminish the opponents health is to punch the body till his stamina is low, then attack the head.   Players online are well aware of this.  Many times online, your opponent won’t change his strategy based on how you play, but instead will simply spam attacks at your body till your stamina is reduced then spam attacks at your head.  After his stamina is reduced, he will back up and start the process again.  In the week the game has been out, I’ve witnessed this strategy from several online players.  Although it’s obviously an effective technique, it can really make some online fights both boring and repetitive.  One might suggest this isn’t a problem with the game but a problem with the players playing the game, but the players are just playing the game the most effective way – which just so happens to be in a boring and repetitive manner.

Aside from the sometimes annoying online fights, the Online Championship mode is set up quite well.  There are multiple belts available for each of the three classes – lightweight, middleweight, heavyweight.  In this mode  you use your created boxer and fight against other online players’ created boxers.  The online rankings are fun to climb, and finding fights is quick and easy.  In the regular online mode you can use any of the 50 fighters to fight other players online.  One problem with this mode is the lack of more weight classes.  Instead of all the weight classes, boxers have all been lumped together into the three aforementioned weight classes.  This means that a boxer who is a welterweight will be in the same middleweight class as someone who is a super middleweight. So, if you like using Manny Pacquiao online, be prepared to fight against the likes of Kelly Pavlik and Jermaine Taylor who easily outweigh Manny and make the fight tremendously lopsided.

The mode in the Round 4 that looks to have made the most improvements over its predecessor is the Legacy mode.  You are able to fight your way up the rankings fight by fight until reaching the top and acquiring multiple belts.  At times, other fighters will put your reputation on the line by challenging you to a fight.  You can shy away or you can man up to the challenge.  Other times, a fighter will back out of a fight you’ve agreed upon only to be replaced by a boxer you are unprepared for.  These do a good job of keeping you on your toes and prepared to fight anyone at any time.  Your fighter has a schedule, much like in other sports games, on which you schedule your upcoming fights.  In your offtime you are also able to take part in several training mini-games to increase your players stats.  The number of training opportunities  you have between fights depends on when you scheduled your fight.  If you want to get in as many fights as possible, you can schedule fights so close together that you never train.  On the other hand, if you want a lot of training you can fight once a year or even less often than that and train several times before each fight.

The CPU AI can offer challenging fights throughout the Legacy mode.  Using the same tactics that worked well in Round 3 won’t get you very far in Round 4.  You are forced to constantly adjust your strategy in order to remain undefeated in the Legacy mode.  Rarely is the CPU too easy to keep the Legacy mode from being fun.  Althought the previous statements hold true most of the time, there are occasional fights in which the AI is very frustrating.  For example, I played the game on a high difficulty level and there was one fighter I could not seem to beat no matter how smart I fought.  He would take me to a decision time after time and win regardless of my efforts.  In frustration I threw 1121 consecutive straights at his face.  To my chagrin this was the strategy that finally beat him.  For the most part the AI is sound, but sometimes it will leave you saying, “what in the world is that CPU thinking?”

Another plus to this game is how realistic everything sounds.  Each punch is accompanied by a “thud” equivalent to the punches weight.  Boxers can be heard exhaling with punches as well as losing their breath when punched too hard in the stomach.  Joe Tessitore and Teddy Atlas do a great job commentating, although many of their lines get recycled too often.

In conclusion, Fight Night Round 4 is really a great game.  The game looks and plays really well.  It gives gamers and boxing fans just about everything they would want from a boxing game.  Previous installments in the series always had one or two things missing, and everyone knew it.  This game doesn’t have any big pieces missing.  This time around EA really did listen to Fight Night fans and fixed nearly every issue people complained about.  This game certainly isn’t perfect, but it’s as close to perfect as we’ve seen from a boxing game.

Final Verdict:
EDITOR’S CHOICE
Round 4 is a worthy successor to the Fight Night throne with plenty of new features, along with a few quirks.
A copy of this game was provided by Developer/Publisher/Distributor/PR Agency for review purposes. Click here to know more about our Reviews Policy.