Campo Santo's Firewatch starts off great but loses steam later on in the game.

Campo Santo, the developers behind Firewatch, are a rock-star group of indie developers. Founded by Sean Vanaman and Jake Rodkin, the writers of The Walking Dead Season 1, they sought to continue pushing narrative capabilities in gaming. Olly Moss is in charge of the art design, an artist famous for his work with Studio Ghibli and LucasArts. Nels Anderson is a designer and programmer who was the lead designer of Mark of the Ninja. There’s also Jane Ng, Ben Burbank, and Chris Remo formerly of Double Fine filling various roles.

Despite, or because of, all that talent, I came away from Firewatch thinking it should have been better than it was. That’s not to say it’s a bad game, far from it.

You play Henry, a forty-something year old man who’s escaping his old life by taking a job as a fire-watcher in the Wyoming wilderness. It’s 1989, and without cellphones or the internet, it’s your job to sit in a massive watch tower and keep an eye out for any fires and radio them in to your boss. Her name is Delilah, and she’s just as isolated as you in her own tower several miles away. 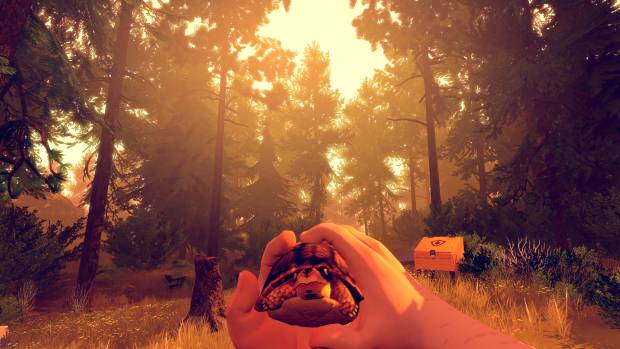 "With nothing more than text and some background music, you’ll be more emotionally invested after five minutes than the entire runtime of most games."

The game starts with an old school text based adventure scenario. It delivers the backstory of Henry and his wife Julia, and it gives the player options to choose how their marriage progresses, and what kind of person Henry is. It’s a fun and engaging way to give an exposition dump, which is basically what it is.

You’re introduced to the incredible writing. The dialogue options don’t allow you to change the backstory much, but it allows you to further connect with both Henry and Julia. This opening demonstrates a blend of tragedy and humor. This is one of the rare games where copious amounts of swearing doesn’t sound like its coming from high schoolers trying to be edgy.

With nothing more than text and some background music, you’ll be more emotionally invested after five minutes than the entire run-time of most games.

These text scenes are interspersed with short gameplay sections of Henry walking through the woods to his watch tower for the first time. This acts as a tutorial to introduce the basic mechanics, like climbing over fallen trees and navigating through the woods.

Once you’ve made your introductions with Delilah the game properly begins. You find yourself thrust into an open forest with nothing but a compass and a map, and are told to investigate the source of some fireworks in the distance. After having nothing to go on but the colorful explosions in the sky guiding you, you come across some teenage girls. You can stare at them, you can be polite and tell them the fireworks are illegal, or you throw their radio in the water. 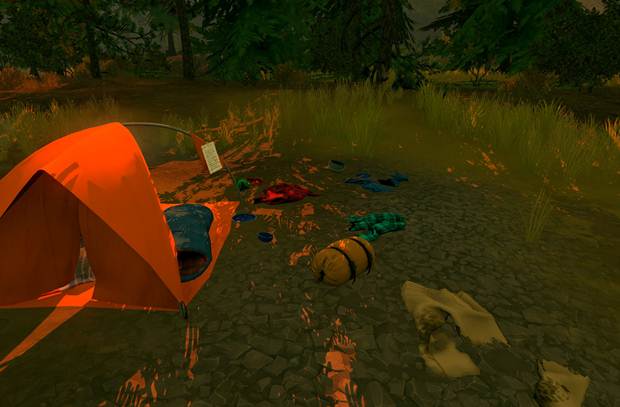 "You’ll spend a lot of your time walking from place to place, admiring the art and the soundtrack. It’s a well-paced game, with more exploration options and decisions becoming available as time goes by."

It’s all brought together by Delilah and Henry’s voice acting, not so much the cherry on top, but a key ingredient. Each line is delivered with the right combination of passion and a belief in the game, snark and sarcasm. These actors turn what would be normal, boring conversations into gripping chats, arguments, and heartfelt journey’s to the past.

This is, at its heart, what Firewatch is all about: exploration and decision making. You’ll spend a lot of your time walking from place to place, admiring the art and the soundtrack. It’s a well-paced game, with more exploration options and decisions becoming available as time goes by. You’ll find an axe, be told it’s a pulaski, to clear debris and cut down trees to get to new areas. You get a rope and some anchors so you can climb up and down rocks like a Spiderman cosplayer. You’ll even find a camera at some point that allows you to take pictures, which you can then have developed and made into art prints by Campo Santo.

Your most important tool however is your map. This might not be the biggest open world, but it’s a dense forest, meaning it’s easy to get lost. It’s fun transitioning into a lost, bumbling idiot and into a seasoned mountaineer who knows the area like the back of their hand. It’s a great moment of connecting the player with the protagonist, as Henry is just as clueless as you are at the beginning.

However, this feeling is ruined because the map, a paper map that Henry draws on to avoid getting lost, always displays exactly where you are. This defeats the point of giving the player the compass, the direction signs, and all the markings Henry draws. It’s far too easy to just open the map and know exactly where you are in an instant, but it’s too difficult early on to proceed without it. Imagine playing a game where you have to use landmarks or even the stars in the sky to figure out where you’re going. 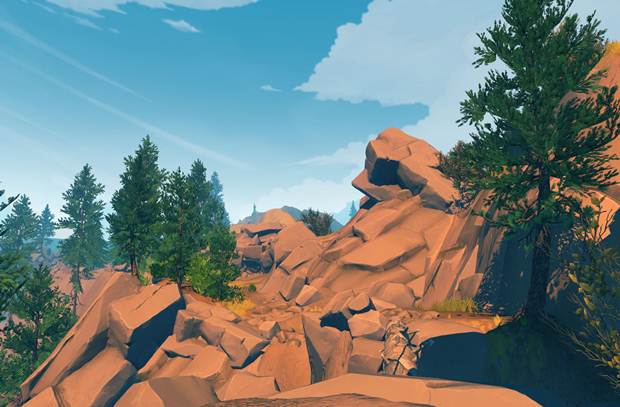 "As big a role as navigation plays, it has a surprisingly small impact overall. Campo Santo touts multiple paths from place to place, and several hidden areas to explore. While this is true, the directions you take don’t matter, and since time never plays a factor, there’s no reason to rush."

Not that it actually matters. As big a role as navigation plays, it has a surprisingly small impact overall. Campo Santo touts multiple paths from place to place, and several hidden areas to explore. While this is true, the directions you take don’t matter, and since time never plays a factor, there’s no reason to rush. There’s not anything in the “secret areas” either, save for some flavor text between Henry and Delilah.

The lack of the core mechanics weight continues in the dialogue options and player choices. As commonplace as dialogue options are, nothing you say or do effects the world or the narrative. There’s one objective where you’re tasked with gathering your own food from a supply box. The box held three different supply bags, and I accidently grabbed all three instead of only one. The next day, Delilah asked if I took the food because now the other lookouts are starving, Henry said yes (on his own), and Delilah didn’t care. The issue was never mentioned again.

Up to this point, Firewatch was basically a glorified “walking simulator.” It was just walking around the woods, watching for fires, and talking to Delilah. But then you see a shadowy man on top of a cliff, and as he scurries away, he takes any hope of this being a great game with him. Any notion you had of what Firewatch might be is thrown out, replaced by a poorly ridden mystery romp.

The mystery of who this person is makes up the bulk of the plot. For such an important part of the story, it feels rushed and artificial. It never felt like a mystery game until the shadowy man showed up a third of the way through. There’s a distinct drop in the quality of the writing compared to the rest of the narrative and dialogue. 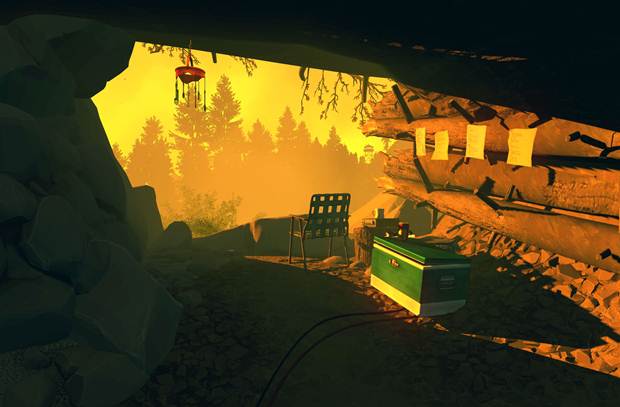 "What’s left are the remains of what would have been a great game. Firewatch can be beaten in four and a half hours, even with a high volume of exploring and stopping to talk to Delilah."

What sells the awfulness of this aspect was the ending. All throughout Henry and Delilah’s ideas of who might be following them grows into a big conspiracy, yet the final payoff is so small and meaningless compared to their ideas, it’s a big letdown. You learn who’s behind the mystery, but the ‘why’ is left vague because it’s easy to poke holes in the plot if you think about it too long. Then it’s over ten minutes later with little fanfare.

There are a lot of story beats that serve only to flesh out Henry and Delilah’s backstories. Henry likes to write, Delilah had a boyfriend before coming here. It’s stuff that gets casually mentioned that would have been interesting to explore further, but it never goes anywhere because the plot is so busy trying to tell a mystery. If it were just about Henry and Delilah talking, exploring the forest, and watching for fires, it would have been so much better, more grounded, and would have had a stronger impact. It feels like the developers said “you know what? This is boring, do something to liven it up.”

What’s left are the remains of what would have been a great game. Firewatch can be beaten in four and a half hours, even with a high volume of exploring and stopping to talk to Delilah.

If nothing else, it’s all a pretty package. The art work by Olly Moss, both in the immediate graphics and the countless posters and signs scattered through the world lend a cartoony feel. It’s an evocative style that will make you want to use the camera, and will make you want to pop an extra $15 for the prints. The soundtrack by Chris Remo does an admirable job backing up the art, with twangy acoustic guitars that sound like something from classic westerns, even if the instrument is so overused these days.

Firewatch does a lot of things wrong, but I can’t help by having a soft spot for it. It’s saved by its dialogue, some of the best in the industry as you’d expect from Rodkin and Vanaman. As bad as the overall plot is, the dialogue is written and delivered in such a natural way it’s easy to overlook even some big problems. Henry and Delilah are great, deeply flawed and fascinating characters, and it’s a shame to see them, and this great art, dragged down in the end.

The dialogue is some of the best you’ll find, bringing two great characters to life. The voice acting doesn’t hurt either. Olly Moss’s art will force you to constantly pick your jaw off the floor, and exploring his art will keep you invested. This is a charming game.

It’s a shame traversal is far too easy thanks to the weird GPS paper map. Worst of all, what could have been an engaging, grounded plot is brought down by a silly, clichéd Hardy Boy style mystery you’ll likely solve long before the end. It’s a good thing too, because the ending is so underwhelming.

Final Verdict:
GOOD
Firewatch could have, and should have, been so much better than it is. You can see the greatness shrivel up like a dying flower when the mystery elements are introduced, and it’s heartbreaking. On brief occasions that greatness peaks through the mediocrity, but that only makes everything else more disappointing.
A copy of this game was provided by Developer/Publisher/Distributor/PR Agency for review purposes. Click here to know more about our Reviews Policy.