FlatOut better than the last one!

If there’s one thing I certainly miss from the previous generation of consoles, it’s the myriad of great arcade style racing games that were available. Titles like Burnout Paradise, Pure, Driver: San Francisco, Split/Second, and especially Blur were some of my favorites. Till this day, I’m still quite proud of the fact that I was able to acquire a physical PS3 copy and digital PC version of Blur.

That said, the current generation of console games, while arguably on a vicious high-rise thanks to the ample quality releases we’ve had so far in 2017, has yet to quite hit that stride for me in the arcade racing genre. Which is why despite never actually getting too much into the FlatOut series, FlatOut 4: Total Insanity comes across as a surprising distraction.

For those not familiar with the series, FlatOut is an all-out destruction derby style racer that was originally developed by Finnish dev Bugbear Entertainment. The developers had officially parted ways with the series around 2007 upon the release of FlatOut: Ultimate Carnage. Nowadays, they’re much more focused on their current Early Access racer dubbed Wreckfest, that looks to build on the same tone of their prior works. 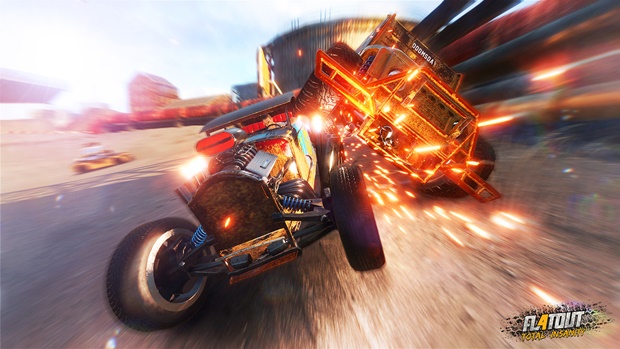 "One challenge will have you fling your driver avatar across a decathlon track into a carefully constructed toy block castle, filled with several explosive barrels no less. Thanks to the game’s wacky physics engine and its penchant for explosions followed by more explosions, FlatOut Mode is by far some of the most fun I’ve had with the game."

Fast forward to today, and after the disaster (so I’ve been told) that was FlatOut 3, it’s now French developer Kylotonn Games turn to answer the call. Best known for their work on the WRC: World Rally Championship series, FlatOut 4: Total Insanity tries its best to fill the big shoes of its predecessors. And it does that in several ways.

For starters, the inclusion of the iconic FlatOut Mode is an immediate plus. Essentially, the mode is comprised of tons of challenges that involve around a specific goal or mini-game. For instance, one challenge will have you fling your driver avatar across a decathlon track into a carefully constructed toy block castle, filled with several explosive barrels no less. Thanks to the game’s wacky physics engine and its penchant for explosions followed by more explosions, FlatOut Mode is by far some of the most fun I’ve had with the game.

Even more noteworthy are the Arena challenges that essentially turn the game into a demolition derby, with the occasional “tag, you’re it” variation that is “Keep the Flag.” The feeling of nitro boosting your way into a pile of vehicles while narrowly avoiding your own eventual demise is wonderful, and is what makes FlatOut so damn satisfying. Additional challenges can be unlocked once you’ve acquired enough points through the ranking system. As long as you earn a bronze in each challenge, you should be able to unlock the next set. 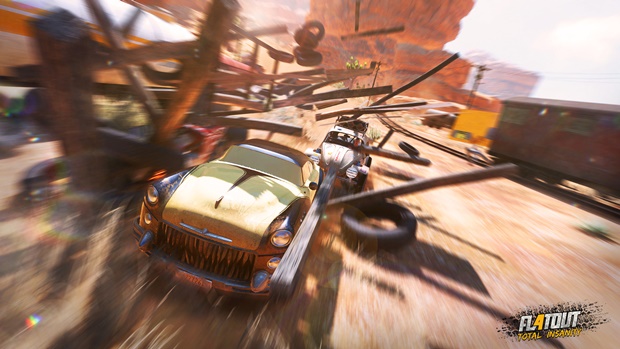 "The risk/reward factor for playing dangerously and going complete balls-to-the-wall comes off as much less attractive when compared to driving carefully and being more on your guard."

Apart from FlatOut Mode, a Career Mode is also available and directly ties into how you acquire more vehicles, customization options, driver avatars, and so on. There are three main classes to choose from, but you only have the Derby Class to start with. Once you’ve committed to your first car purchase, races are broken up into three series with various tracks and weather conditions tied to them. Much like FlatOut Mode, based on how well you place in races, you can earn enough cash to improve your car stats or purchase a different car from any of the other classes.

Initially, this seems like a straightforward enough campaign to have players unlock newer rides, all the while getting acquainted will the 20 plus different tracks available and how different weather conditions can impact your performance. But after the first two Derby cups, it becomes more of a slog. This is mostly due to two reasons: AI drivers and how narrowly designed some of the tracks can really be.

Unlike for a game like say Burnout, AI cars are not easy to take down. Weight class has a lot more importance, and while I can understand why you shouldn’t be able to topple every vehicle with just a nudge, sometimes the opposite feels more true. Whether it’s because of AI cars getting in your way, and you’re trying to maneuver corners with minimum noise from the environmental decorations strewn all throughout, crashing in Career Mode is a lot more detrimental to your placement in races. The risk/reward factor for playing dangerously and going complete balls-to-the-wall comes off as much less attractive when compared to driving carefully and being more on your guard.

This would be fine if placing high in races would yield more rewards. Vehicles are unlocked at a snail’s pace. By comparison, it feels far more rewarding to sample the different rides you have available to in FlatOut Mode, even though every car for every challenge is already chosen for the player. In order to accumulate enough cash in Career Mode, I ended up replaying the optional Arena Survivor races. It was just quicker, more fun, and feels more in line to FlatOut wants to be. 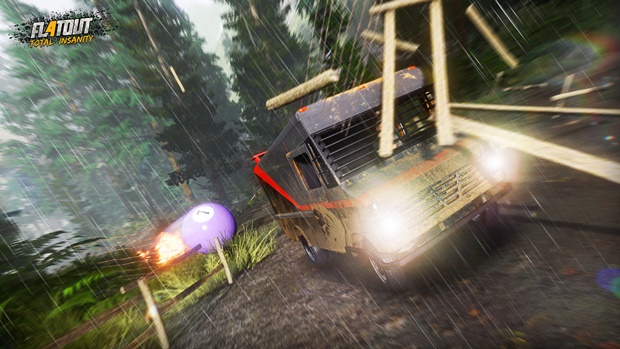 "FlatOut 4: Total Insanity has a solid foundation to draw in new fans, and is a welcome addition to the genre for fans like myself."

Another short oversight I feel is the way Assault Mode works in races. On paper, the premise sounds fantastic: a race mode which gives everyone cool power-ups like shockwaves and magnetic bombs a la Mario Kart. But rather than have these abilities as pick-ups, you immediately start off with all four of them. These power-ups and the amount of times you get to use them are restricted to a cooldown. Meaning, all racers will always have access to them, and this results in utter chaos. Which would be fine, if it weren’t for the fact that you’re encouraged to play carefully if you want to make it in the top three.

That’s not to say I can’t appreciate some of the qualities that come with playing Career Mode. Some of the track locations are quite imaginative and varied throughout. Whether you’re huffing sand in the Desert Outskirts or driving down a drainage canal Terminator 2 style, there’s a great sense of atmosphere that may probably feel right at home for fans of Motorstorm.

FlatOut 4: Total Insanity has a solid foundation to draw in new fans, and is a welcome addition to the genre for fans like myself. The lack of local split-screen, while granted is not a very common feature in today’s driving games, is a missed opportunity regardless. If you’re looking to invest some quality time in plowing through its challenging single player offerings, or just plain starved for a decent arcade experience that involves you smashing or being smashed, FlatOut 4 may be worth your time.

FlatOut Mode is a hoot. Destruction derby Survivor Arenas are a blast. Some nice locales to race through. Feels good to have a traditional racing game along with just ramming into cars until they explode.

Career Mode can be quite brutal. Getting new cars and acquiring in-game money doesn’t happen frequently enough. Sadly, no split-screen. UI/UX can use some more love.

Final Verdict:
GOOD
FlatOut 4: Total Insanity has a solid foundation to draw in new fans, and is a welcome addition to the genre for fans like myself.
A copy of this game was provided by Developer/Publisher/Distributor/PR Agency for review purposes. Click here to know more about our Reviews Policy.