Playing Flower made me realize something – aside from sports, racing, and music games, there are no games that I own that do not involve some form of killing. Don’t get me wrong, I thoroughly enjoy first-person shooters and action adventure titles.  In fact, gruesome games such as Fallout 3 and Bioshock are among my all-time favorites.  However, Flower convinced me that bringing life – as opposed to destroying it – can be every bit as enjoyable. 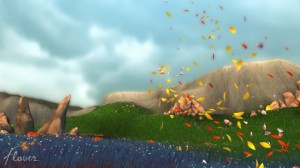 Flower’s beginning is a simple one – a single flower petal is released by a flower and caught up by the wind.  The player is given control of both the petal’s direction and the wind’s strength.  The wonderful part about this is that there is no tutuorial and no user interface.  By simply moving the Sixaxis controller, the petal follows your command.  In no other title has Sixaxis control been this intuitive and easy to grasp.  It simply makes sense.  As you control the petal, you encounter other flowers that release petals as well.  These petals follow your original petal and begin to accumulate into a stream of windblown color.

As you traverse the initially drab and dismal terrain, things begin to change.  The flowers you find and bloom bring life to their surroundings.  Gray and dying fields are filled with the vibrant colors of grass and flowers.  The player is never given an objective or a mission, but it soon becomes apparent what the challenge is – bring life to a dark and dying world. 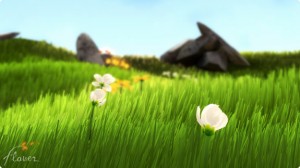 The game has an obvious story that requires no words or speaking to narrate.  The contrast between life and death and between light and dark are the only voices necessary to tell this tale.  The story consists of six levels or areas that are progressively larger and more complicated.  Each level reaches a climax where the culmination of your efforts results in various flourishes of color and life corresponding to the terrain of the area.  When the end of each of these levels is reached, you are rewarded not only visually but emotionally as well.

The emotional impact this game makes is due in large part to the beautiful visuals throughout the player’s journey, but that’s not the only contributing factor.  The music in the game is perfectly matched for the experience.  The visuals and corresponding emotions are matched moment by moment with the soft undercurrent of the musical score.  As if that wasn’t enough, when flowers are touched by your stream of petals, musical notes are played that seamlessly fit into the soundtrack.  It’s as though the music is being composed and performed simultaneously with the onscreen action.  The combination of visuals, control, and sound is really something to behold.

Aside from all this praise, there are two things that should be mentioned.  First, you are swept up in this great experience, but then it ends.  It leaves you wanting more.  This game really is awesome, but it will leave you wishing there were twice as many levels.  Second, as much value and enjoyment as I found in this game, it still isn’t for everyone.  Many gamers will be too inclined to blow things up that they won’t appreciate anything that has to do with flower petals.  These are the same people who would rather see a firecracker explode than see the Mona Lisa.  To each his own.

In summary, there really isn’t anything else like Flower out there today and certainly not on the Playstation Store.  As much as I doubted the game before playing it, I can not justifiably finish this review without saying Flower is a must buy for any PS3 owner.  The experience is simply too rich to miss.

A little too short

Final Verdict:
EDITOR’S CHOICE
Flower defies conventions and delivers a truly beautiful gaming experience.
A copy of this game was provided by Developer/Publisher/Distributor/PR Agency for review purposes. Click here to know more about our Reviews Policy.