It’s all about fast building.

Fortnite from Epic Games is a real-time survival/tower-defense that learns a lot of lessons from other tower defense games while putting its own spin on the genre itself. And while this may not be a game on a scale that we’re so used to seeing Epic Games manifest; it’s more of a cute stylized game with a few moments of impeding danger. The zany characters and cartoon-ish graphics make for a pleasant time. The building and defense strategies are well crafted and not at all time consuming.

Fortnite‘s preview version at E3 2017 had me in a cold, dusty field where I was told I had to protect a generator from hordes of zombies coming out to try and tear it down. Apparently a huge storm hits the homeland and zombies have come out from the ground and want to attack you. So it’s up to me and my team to build a shelter around these generators that help protect us from the on-coming horde and save ourselves.

The first impression I got while playing Fortnite was the sheer wackiness sewn into every inch of the game itself. From the humor that involve crazy good jokes, to just fun little nods to other games, Fortnite is a game designed for a someone who has a deep sense of humor. Each character in the game has one liners that I just didn’t know were going to be said; and once they popped up with these quips, I was quite literally laughing out loud while the developers watched me play. 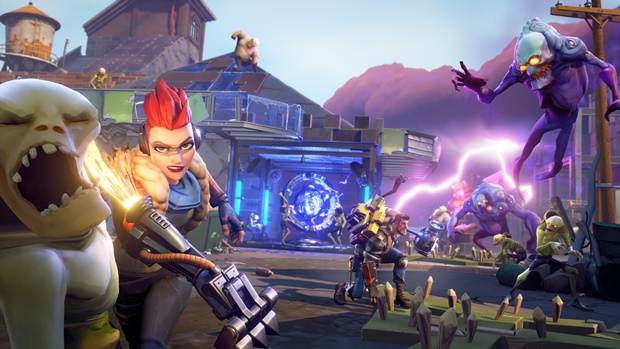 "What is it like building a tower? Surprisingly easy compared to other tower-defense games."

Of course, there’s nothing more important in a tower-defense game than the building controls. As most of us know, fitting in controls necessary for a successful building game is hard to do on a console. And though I played this game on PC, I was able to use a PS4 controller the entire time. Interestingly enough, the controls felt good with Fortnite, even though they will take some patience and practice. There are dozens of options to choose from while you design your base, so there are several buttons at play all at the same time.

Choosing certain items will usually take  a button to activate, sometimes two buttons. At that point you’ll scan through your inventory of what’s buildable and go at it. Some of these configurations did have me confused for the first five minutes, however. Clicking the wrong button — as I said several buttons are available and ready for many different action commands — will activate a different sub-menu and open up another series of option. All of the options are available to view at the bottom right side of the screen; but even then it becomes a little difficult to actually see what buttons are being referred to, because the icons so small.

What is it like building a tower? Surprisingly easy compared to other tower-defense games. The biggest difference from Fortnite and other similar games is the speed at which building takes. There’s no waiting around for a wall to grow or defenses to plant. Once you click the item you wish to build, boom, it’s there. Walls, ceilings, and floors go up super simple and super fast.  One thing that may frustrate people about building is the tediousness of collecting certain parts to build certain objects/items. But Fortnite addressed this. There is a certain level of exploration that you’ll need to do to collect parts for items. However, these parts are usually everywhere; and when they aren’t lying around it’s fun to go off and see the game’s surroundings before you get trapped in your base for extended periods of time. 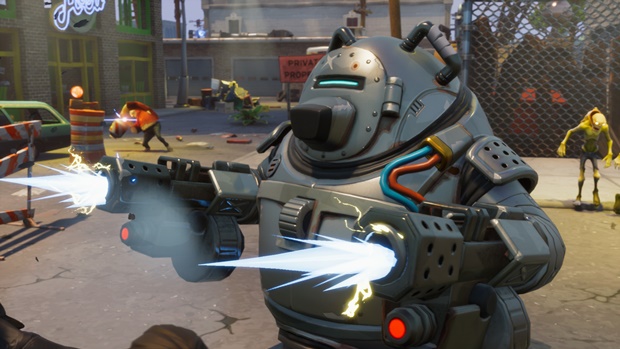 "Now this may just be the early version of the game, but for what they had on hand, nothing stood out for me in this department. I actually had more fun building my base than I did planting the lackluster traps that were available."

Traps in Fortnite‘ were surprisingly familiar with little to no originality. Spikes for floors/walls, barriers, barbed wire traps, and other similar items were available. Now this may just be the early version of the game, but for what they had on hand, nothing stood out for me in this department. I actually had more fun building my base than I did planting the lackluster traps that were available.

Once my base was completed and I had the generator protected, and my traps were set, it was time to fight. The first couple waves of zombies were small and they all came from one to two different directions. As the waves went on, zombies started to come out from every corner. Surprisingly, it was still simple to tackle the horde, even with tons of more zombies. I’m not sure if they toned down the difficulty for the preview version or not, but I literally had one zombie hit a trap the entire time; while I had killed them all with my rifle before they could even approach or get close to our base.

Fortnite is aesthetically nice, and awfully familiar. The game seems to borrow a lot of detail from Plants vs. Zombies; it’s immediately apparent when the glowing-eyed zombies approach the players. I’m happy with cartoon style graphics, so this design choice was great for me.

Overall, Fortnite is an interesting game that takes steps to speed up the process of making building quick and efficient. It might not have the originality it takes to stand out from other similar tower-defense games out there, but hopefully it finds its niche in the market. The battles are fast and ultimately too easy, but the humor makes even a casual playthrough enjoyable. Hopefully the game is tuned up a bit more by the time it launches.