Fortnite Wiki: Everything you need to know about the game

Everything you need to know about Fortnite.

Fortnite is an upcoming action survival sandbox game from Epic Games. The creators of the Gears of War franchise and the competitive first person shooter franchise of Unreal Tournament games. The game is set in a zombie apocalypse and will be centered on a gameplay mechanic that forces players to scavenge supplies during the day time and fight the hordes at night.

This is set to be the first game developed by Epic Games that will make use of their powerful new Unreal Engine 4. The game is currently only planned for release on Microsoft Windows PC’s and is slated for a release some time in 2013.

Fornite was first revealed to the public by Epic on December 10th of 2011. It is currently the only known game that actively uses, and runs on the brand new, top of the line video game engine, Unreal Engine 4. Unreal Engine 4 is a big step forward in the world of video game development tool, the engine allows for real time and dynamic global lighting. A long sought after video game mechanic that will replace the now aging pre computed voxel cone tracing lighting which inserts lighting as an element in the game, rather than an actual dynamic reactive light source.

This is accomplished thanks to a piece of software called Enlighten, produced by Geomerics. Speaking about Unreal 4, Epic has said “As the world’s most advanced game engine, Unreal Engine 4 gives you the power to do more than ever before. Unreal Engine 4 offers a deep, intuitive toolset and low-level access to code, cutting down on development time and ensuring faster iteration on creative ideas. With a completely new rendering architecture, Unreal Engine 4 enables you to achieve high-end visuals, while remaining both scalable and accessible to make games for low-end systems.”

Fortnite is currently being titled as a co-op Sandbox Survival game, but one of the game’s core gameplay mechanics is the ability to construct fortresses. This seemingly Minecraft inspired building mechanic will be one of the game’s central pillars of support, as of now it’s unknown how it will actually work and whether or not it is confined to selected areas of the game world or if it can be employed at any time. Where Minecraft was elegant in its approach to visuals, ie: keeping it basic and blocky, the fans wanted more. This brought around the popular Sonic Esthers GLSL shaders which made the game beautiful.

This is, in effect what Unreal Engine 4 will do for Fortnite. Epic Games have recently been a developer more focused on the more adult orientated gaming audience. With franchises like Gears of War (harbinger of the famous Lancer Assault rifle) and Unreal Tournament where it rains blood at a fairly constant pace, it was shocking to see the rather cartoonish appeal behind Fortnite. Gone are the morbid and fearsomely terrifying Locust from Gears, as is the torrents of gore from Unreal Tournament. Replaced with a much more user friendly experience, regardless of age, despite the zombie apocalypse setting.

Fornite is a survival sandbox experience intended to be played as a co-op experience. The gameplay centers around the player, or players surviving in the days after a zombie apocalypse, the game play consists of exploring the game world around you, scavenging for materials and pieces of gear, building fortresses and other protective structures as well as defending yourselves by fighting of the waves of  enemy monsters that you will find coming your way. Players will find themselves needing to work together so that they can survive the zombie apocalypse. 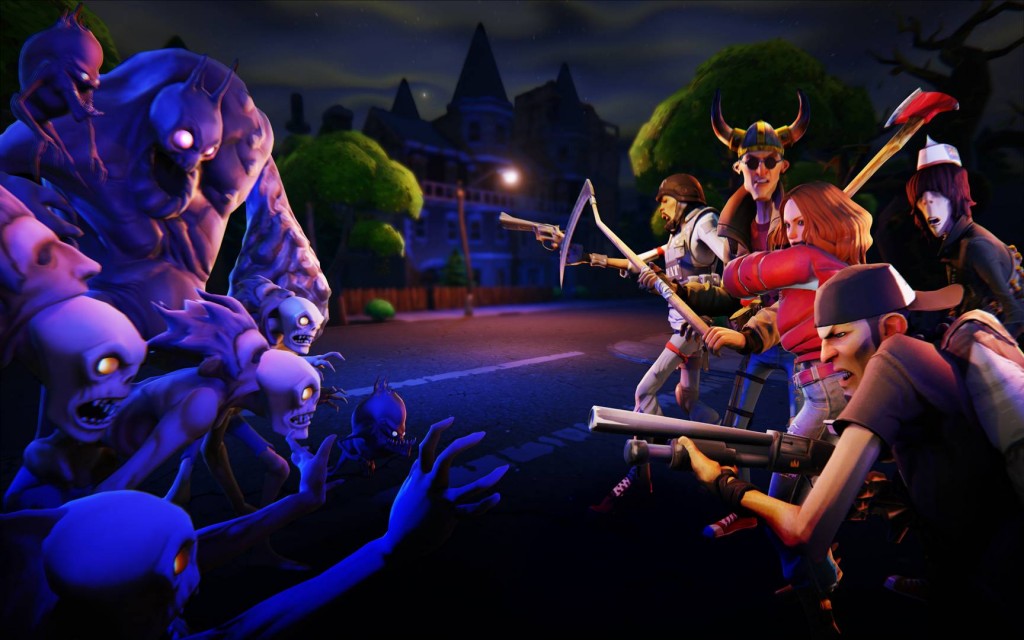 You must take every opportunity you can get during the day light hours the salvage materials and build your defensive structures so that when night arrives you have a bastion from which you can fight.

The Minecraft component of the gameplay is of course in reference to the base building mechanic that allows the player to create and edit the walls of their forts with a 3×3 grid-like interface, giving them the choice of including staircases for multi-tiered forts, roofs to keep out the elements and windows if they so choose. This enables them to ‘sculpt’ each fortified area to a specific task, what this means is unclear as enemy types have not been unveiled in detail yet.

The mention of “bow weapons” is also a clue as to what you can expect from the weapons in the game. A bow is primarily seen in games to be a handmade and roughly fashioned weapon, perhaps weapon creation will be a component in the game. The reference is likely a nod towards the bows being used in games such as Far Cry 3.

The tale of Fortnite is by no means original, but it is certainly a tried and tested one that has served video game developers well over the years. Set in the days following the end of the world brought about by a zombie apocalypse, it is up to you (and possibly your friends) to make sure humanity endures until the last.

To accomplish this, you will head out in when the sun is up and gather resources that you will use to build fortresses to keep you safe when the sun goes down. Because when the moon is in the sky, the dead will walk and you must defend yourself, the only question is whether you will survive.