Fragile Dreams: Farewell Ruins of the Moon is a role-playing game with dungeon-crawler elements, available only on the Nintendo Wii. It was developed by Tri-Crescendo and Namco Bandai; and was published by Namco Bandai, Xstar Games and Rising Star Games in Japan, the US and Europe respectively.

Games are usually focused on making gameplay more refined and having gamers move on to the next product. However, some games manage to find their niche by having more of a focus on storytelling. Such is Fragile Dreams, a game that puts its first priority as being a deep memorable storytelling experience; and something fun and enjoyable second. Whether or not you think this is a good thing is open to debate, but if narrative is what you’re looking for then you are going to love the game – if you are willing to look past a somewhat-dated formula and some other minor issues. The game is set in a post-apocalyptic wasteland after the supposed destruction of humanity, where there is no one left roaming the planet except for strange spirit-creatures. Once-towering cities have now become nothing but a crumbling image of what once was. Among the few human survivors is a boy named Seto, whose grandfather has just recently died. Now without anyone to call his friend, he must traverse the world to see if there are any fellow humans still alive that he can share his presence with. These wonderings gain a purpose once Seto meets a girl with silver hair; who flees our hero, and now we must brave many obstacles, labyrinths and monsters to follow the young girl. 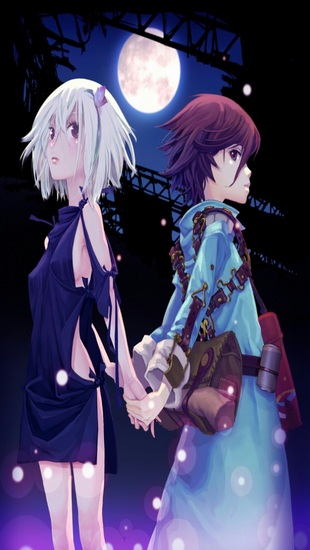 There are no plans (yet) for an anime of Fragile Dreams, but it would lend itself well to a change of media.

The setting might seem a bit clichéd on paper, but in practice it turns out to be a moving and memorable experience. It truly is one of those stories which has to be experienced, not explained. The easiest way to describe the story is to mix Lost Odyssey with a large pinch of cuteness from WALL-E. Where Lost Odyssey is a study of the emotional impact of immortality, Fragile Dreams is more an observation of human emotion itself. No matter how odd the characters you come across might seem, chances are you will become attached to at least one of them as the game progresses. The story is fleshed out with Seto being able to find Memory items to observe the remaining memories within them, a narrative inspiration from Lost Odyssey. The memories range from just a single moment in time to a whole story of what the owner of the item had, from the perspective of an old man to a young girl, and even a dog. The items all offer a sense of unfulfilment on the part of the owner because they are of their dying moments on a dying earth, and many of which make the player wonder what kind of person the owner of the item was.

Overall, the story of Fragile Dreams is one that portrays the sadness of humanity and what emotions and mortality can do to drive people to do questionable things. All of the characters are also very human, even the ones that might not appear human at first. There’s no over-the-top nature behind any of the characters no matter how bizarre looking they might seem. If you expected a game with zany characters or ridiculous action, you’re out of luck. If this is what you’ve been looking for in a video game though, good news, your prayers have been answered. The graphics have more of an emphasis on style than on technical prowess, but it does at the very least do a good job in conveying its well created world. Nothing in the game feels like it couldn’t have been done on the GameCube or even the PS2. There are some frame rate issues in the game though, notably when a very detailed character model appears in the area. This isn’t a common occurrence though, and it doesn’t end up causing any game breaking glitches or anything of that sort. 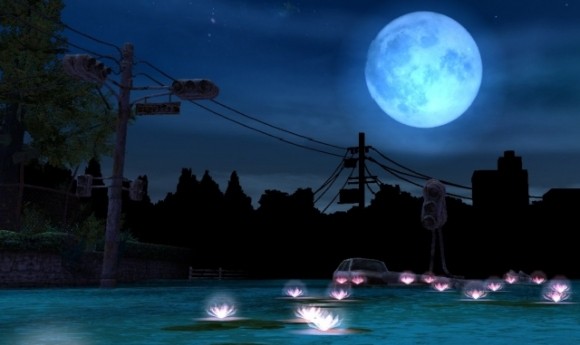 The graphic design of the game favours style over detail.

If you bought Fragile Dreams looking for good sound to add to the atmosphere, you won’t be disappointed. The music usually only plays when there is a cut scene or a character is making his or her entrance, though the notion of nothing but Seto’s footsteps is also enough to remind one of the sense of loneliness that players should be feeling and empathizing with. When there is music, it is usually very minimal and gentle, so expecting any grand epic themes will disappoint players, but it does what it’s supposed to in order to add depth to the scenes. The voice acting is purely a matter of preference, though I personally found the voice acting to be pretty well done. Johnny Young Basch as Seto really had me convinced that he has the capabilities of performing as a younger person, and none of the other characters seemed to have questionable choices in these regards. If you are a purist for the material though, the option to turn on Japanese voices with English subtitles is available if you honestly feel it to be totally necessary to add to how you feel the game should be felt.

I have gone into the story a lot, but that’s because Fragile Dreams focuses on it in the first place. As a game, it doesn’t do too bad of a job entertaining the player, but it certainly is not a game experience that will soon be forgotten in the face of new sequels or IPs. Anyone who has played Baroque will have a fairly accurate idea of how this game is played, though it doesn’t play 100% like said dungeon-crawler. You move Seto with the control stick on the nunchuk and aim his flashlight with the wiimote. The B button allows you to search things in more detail from the first person perspective and the A button zooms in/examines things from this point of view – otherwise the A button serves as the attack button. Failing to examine important items is never an issue since almost everything that can be picked up is marked with a couple of fireflies ooh, pretty! above the item. There’s also a level-up system that allows Seto to advance so as to have more health and increase his attack power, but it really only seems to serve this bare minimum without much regard to the other stats. 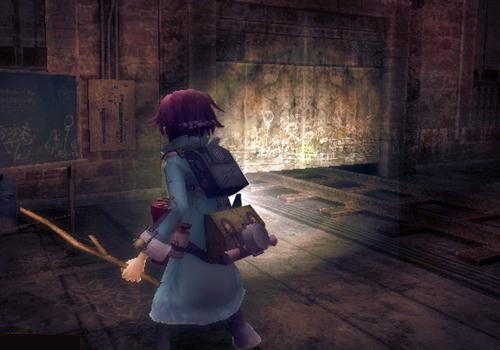 The exploration controls fairly well; but the combat can feel cumbersome and seems to be in need of some polish. Seto is very slow when attacking with any of the four weapon types, steepening the learning curve. Despite this, the game is rather easy to play through since the enemies in the first half of the game don’t offer much of a challenge. The exceptions to this are the enemies in the second half of the game that actually require some form of strategy to defeat. There are also some boss battles, but they are really just regular enemies with more health and an alternate attack pattern. The boss battles may be difficult at first, but as with all bosses once you learn their attack patterns they become very easy. This is quite disappointing as the same can even be said for the final boss. There’s nothing especially broken with the combat system: it’s just not very engaging or entertaining. There are some puzzle sections every now and then, though they are very simple. There are also some QuickTime events, but fortunately these are very small sections. Another negative for Fragile Dreams is that the replay value is very minimal when it can be beaten within 12 hours. After that there’s not much reason to play through the game again since beating the game also unlocks a theatre mode for every cut scene, so you can relive the story all over again without the gameplay. At £30, it’s not too bad of a deal, though if you can find it at a cheaper price it is definitely more recommended.

In this day and age, there seems to be huge conflict between gameplay and narrative. This not only brings up the question of whether or not games can or should provide a good narrative to players, but also to whether or not narrative should be a main focus in the first place. Fragile Dreams is a fine example of how a developer can take a great emotional narrative and place it into a dungeon-crawler engine. If narrative focus is what you look for in a game, you will love this. You might even wonder why it wasn’t made into an anime. When all is said and done Fragile Dreams is by no means a bad purchase by any stretch of the imagination, and I personally think the publishers deserve thanks for bringing such a unique game as this to the world.

Average graphics (even for the wii), clunky combat mechanic, gameplay has been sacrificed somewhat for story-telling.

Final Verdict:
GOOD
Feeds your need for narrative, if anything.
A copy of this game was provided by Developer/Publisher/Distributor/PR Agency for review purposes. Click here to know more about our Reviews Policy.