For those of you old enough to remember the sublime Populous from the stable of gaming guru Peter Molyneux back in 1989, this is its successor in all but name. But for all the labelling as a God game, a few levels in you’ll realise that it’s actually more of a puzzler. In effect, it’s a kind of cross between Molyneux’s classic and Lemmings…

Ubisoft’s dalliance with the deities sees us take control of The Breath – a God-like entity that can absorb earth, water or lava – effectively changing the landscape to help keep the populace alive. 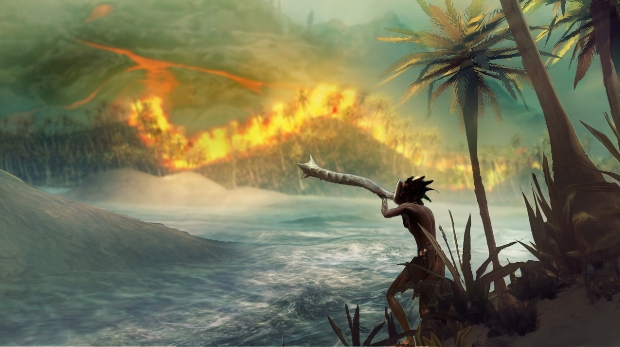 It’s your task to save the tribesmen

The aim is to guide a group of nomadic tribesmen across some increasingly rugged and inhospitable terrain. By sucking up a plume of dust and transferring it somewhere else, you’re providing the villagers with either a pathway or allowing vital vegetation to sprout and flourish. The earth helps to expand settlements or divert the flow of rivers. Absorbing water, meanwhile, protects your people from drowning, can be used to extinguish wildfires, or to eat away at the dusty terrain. Lava is perhaps the most impressive, the red hot flows becoming solid rock when cool and helping to form vital barriers from floodwaters. 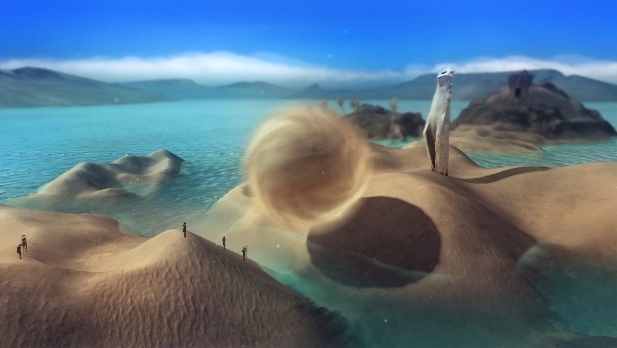 By absorbing earth, water and lava, you can shape the landscape

On paper at least, completing each level is easy… you just need to help your minions reach each of the sacred totems dotted about the map. Each totem requires five people to activate it, and after some dancing and chanting, the shrine will transform into a settlement. Unlock them all and an exit portal opens, ready to transport them to the next map.

As you progress, you’ll earn some additional powers, which allow you to do more than simply shifting earth from one place to another. These include the ability to temporarily solidify – or jellify – water (think biblical references to the parting of the seas and you’ll get the idea) or being able to completely evaporate water on the map for a limited time, the arid conditions aiding safe passage.

Graphically, it’s an extremely good-looking game. The landscapes are lush, and the lava flows and water effects are particularly appealing. Zoom in to one of the tribesmen and the detail is equally decent, so much so that you can easily waste a few minutes just watching the mask-wearing local wandering about. The sound effects are rather subtle and hardly extraordinary but are more than adequate and in keeping with the pace and feel of the game.

As you clear the land around a village, trees grow and eventually animals arrive. It’s a truly beautiful sentiment and thoroughly absorbing; it really feels like you’re actually in control of the land and creating something. If it weren’t for the tight time restrictions on some of the levels or the constant need to keep track of your wandering people, you could happily sit back for ages just taking in the ever-evolving environments.

Sadly, there’s never the feeling that you’re able to make monumental changes to the landscape as you could in Populous – everything here feels slightly smaller in scale, and more restrictive. Often your powers can only be used at certain times and many of the effects are only temporary. It’s very much about building bridges and leading your followers from A to B before the next natural disaster strikes rather than being allowed to create at your own pace.

Beyond the levels in the story mode, there are around 30 challenge maps. These pose smaller puzzles, often using only one of The Breath’s many powers. For example, one level may need you to quickly absorb water to protect your roaming followers, while another requires raging fires to be doused before they reach a nearby village. 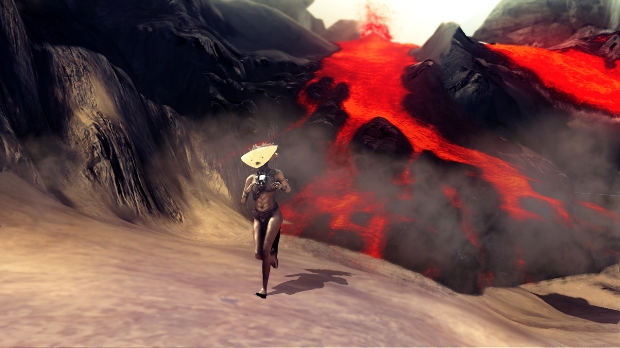 After completing the story levels, there’s the Challenge mode to conquer

It’s a wonderful game and thoroughly “absorbing”. However, it can all be a little frustrating at times too, especially with the clunky control pad not providing as much accuracy as you’d like. One trigger effectively absorbs material, while another drops it. As is always the way with a controller, it doesn’t allow you to be very precise. What this means in practice is that you may deposit your ball of earth in the wrong spot when under pressure – leaving your people open to an untimely demise and the failure of the mission.

It also doesn’t help that the AI is also sometimes lacking – incredibly annoying when you’ve fashioned a makeshift path to the exit only for the tribe to take a different route that leads them into trouble.
Minor niggles aside though, the charm of the game and its addictive “just one more go” gameplay make this a frontrunner for one of the best arcade games of the year.

Great concept, lovely graphics and addictive gameplay make this one of the standout titles of the summer.

More precise controls would be nice. AI is sometimes lacking and some missions are monotonous. A bit more freedom would be great - let us create!

Final Verdict:
SUPERB
A God game and a puzzler all rolled into one. From Dust is a breath of fresh air, gorgeous to look at and really challenging at times
A copy of this game was provided by Developer/Publisher/Distributor/PR Agency for review purposes. Click here to know more about our Reviews Policy.