G-Force is a game based on Disney’s latest film of the same name. In the game you take up the role of Darwin whos been sent by the G-force team to investigate the base of Leonard Saber a filthy rich man. Hes manufactured a group of household appliances who are your main foes in the game. So in the game you are basically playing as guinea pig agent, a rodent, which I thought was just ridiculous. The portable versions DS and PSP were developed by Keen Games and the console versions were developed by Eurocom. The game is a pretty good as compared to the flick and children falling in smaller age group should have a good time with the game.

So now let me explain some of the finer gameplay elements which are to be found in the game. The first thing you will observe as soon as you start the game is the presence of a boost pack at your back. That pack is pretty much a central element to the gameplay. Using the boost pack the player can scale those areas which are inaccessible by using the normal jump. The pack has a couple of modes of operation. First is the one which will lift you in the air for some moments of time. This will help you to reach higher places in the game. Secondly when activated the player will be able to zip through the path with a great sense of speed. The player is also equipped with an electric zap. This really looked like a weapon taken straight from the star war games. Also if you are lost somewhere the players will also have the option to turn on their googles which will help them to find the right direction since the game is essentially not too linear. 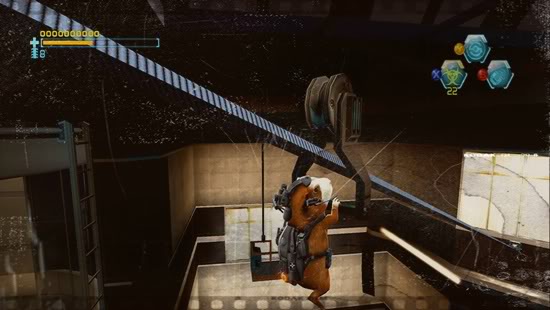 As I said before the enemies in the game are household appliances. Stuff like computer mouse, toasters, ovens, dustbins, paper shredders are the ones who will stand in your way. For most part these are pretty easy to beat. But having said that the microwave ovens which you will find in later stages of the game are pretty tough. The animations showing the body language of these enemies are pretty funny. Some of these appliances are also hackable. For this the player has to find a junction where the blueprint of the particular device is to be found. Than through a series of mini games the player can hack and control them remotely. Some of them were the paper shredders which were a blast to play, throwing razor edged discs were alot of fun. Another one was the vaccum cleaner. Using the cleaner you have to suck yourself to it, than you have to control it so that the vaccum cleaner can throw you over a door or something.

Also accompanying you throughout the game will be your robo fly: Mooch. There are certain sections in the game where Darwin cant access places like through the exhaust fans. Here Mooch comes in to th picture and the player has to control the fly. Did i mentioned path blockers by satellite feeders? Mooch will basically neutralize these hence clearing up a path for you. All this might sound enjoyable and for the most part its, but sadly some of the enemies feel really to cheap. I mean a paper shredder was 10 times bigger than Darwin, and the player just had to lash a few at it and it will be down. Hands down, enemy AI is bad in this game. 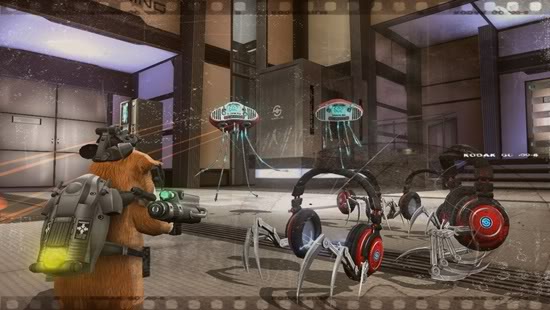 The levels in the game are pretty well designed. For many times I have to serach for places since you are just a very small part of the environemnt. The direction tracker came in handy but overall I did not found the game to be too linear. The visuals are pretty neat for most part. Character animations are pretty good for most part and voice acting is superb. However there are tearing issues here and there. Background sound is just OK. The cut in scenes eventhough in CG , have been implemented very well.

G-Force is for the most part a good game. Kids are probably going to have a lot of fun with this platformer. But the thing here is the developers have made this game for kids not for hardcore gamers. So as long as the target audience will enjoy the game, than its good. But overall the game is a pretty nice tie up with the movie.

Final Verdict:
GOOD
G-Force is a pretty good platformer for most of the part, but its somewhat uneven gameplay holds it back from being a great game.
A copy of this game was provided by Developer/Publisher/Distributor/PR Agency for review purposes. Click here to know more about our Reviews Policy.