Ghostbusters: The Video Game is a game highly influenced by the original film. The game uses actual characters and locations found in the the film. The game features all the original Ghostbusters: Peter Venkman, Raymond Stanz, Egon Spengler and Winston Zeddemore. But the catch here is that you will not be one of the original Ghostbusters, infact you will be playing as a recruit who is simply known as a Rookie in the game. The game takes place in 1991 when a shockwave hits New York City due to which some of the ghosts including Slimer is released. One of the first missions that the player will take on is to capture Slimer. After Slimer is captured the ghostbusters then go on to find the reason behind the shockwave. A number of characters are than introduced in the game including Walter Peck head of P-COC & Mayor Jock Mulligan. Also in the game is Dr. Ilyssa Selwyn who’s a museum curator and the love interest of Ray. As events unfold and the team keeps on fighting against various super natural powers the ghostbusters than land up in a library where they fight off against the Gray Lady who was one of their first captives. After defeating her they get to know through a book that Gray Lady was killed by a Gozer member called as The Collector. During the later events when the Ghostbusters return they learned that Ilyssa is captured by the Shandor. A huge mausoleum than appears in the city where they find both Peck and Ilyssa captured by the Mayor who’s been possessed by The Shandor. Than fighting as a team they defeat the Shandor and they return back to their head quarters realizing that a total of five ghostbusters are too much to handle but thy promise the rookie that they will make him the head of a a new GhostBuster branch. The plot is very well weaved with the gameplay and the developers have done a great job of interpreting the story with the help of some great cutscenes. When the player begins the story mode, he will be immediately be thrown in to capturing ghosts which acts more like a training section. You will have your proton packs along with you. There are four modes in which the proton pack can be used. The first mode is a stream mode which i essentially used for capturing a ghost. To capture a ghost the player is required to follow some steps. First you have to give them a continous dosage of proton stream, when sufficient dosage is given, an indicator will be given in the hud where you can slam the ghost to the walls or the ground in order to make it weak. Once the ghost weakens the player needs to drag the ghost in to the box. The second mode of the proton pack fires blue rays. There are two sub modes in this as well. One which will give a continous stream of blue rays due to which the ghost will be frozed and another where the player can fire them like bullets in packs of five to ten. The third mode is the slime mode. Slime mode is basically used when someone is possed by the ghosts so that the preson can be freed from it. Also one of the sub modes allows the player to stick an object from one place to another, which was essential to some of the puzzle elements found in the game.The last mode is the PPK energy mode where the player can fire high energy proton rays to the ghosts. All these are ofcourse upgradable as you progress through the game and earn more XP. The variety with which the proton pack is implemented in the game is pretty good. If you used the proton packs for too long it will heat up and than the player has to wait for sometime before it recharges again. You will be facing alot of the trademark enemies that the movie is known for. You will be facing off against the Gray Lady in a very dark library, a Fisher Man ghost , Stay Puft , Hotel Chef and much more in the game. Overall the amount of enemies and variety to be found is just amazing. There will be ghosts coming from ground , from the walls and any damn place in the game. You have to keep your eyes open as well as your PKE meter equipped. PKE meter is basically an indication of the activity in the area. When equipped the player is able to see the environment in first person mode with three kinds of readings. 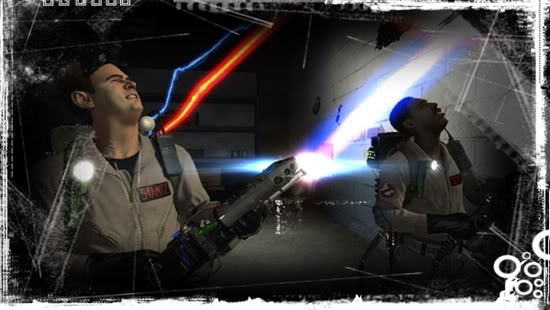 Also if you have to fight a large number of ghosts than your team work has to be good. Terminal Reality has done a very good job of the AI of your team mates. They are capable of fighting and capturing the ghosts themselves. There is also a healing mechanism where you or your fellow teammates can heal each other, so the game is a bit on the easier side since essentially you cannot die in this game. Well to be honest i did but that was only once throughout the game. One big disappointing factor about the game is that you wont be able to drive the ECTO-1. There were instances in the game where the player has to make the road clear for the Ecto-1. I really thought there was some great potenial if they had given the player the option to drive the car.

The graphics of Ghostbusters are very good. You will be travelling to various locations in the game. The player can roam through his own headquarters initially. Later on the player will be able to experience the darker sides of New York city library, mausoleum and underground canals. The player will also be teleportring from different worlds in the game. The environment just matches the theme of the game just right. The voice acting is brilliant in the game and that was expected because Dan Aykroyd, Harold Ramis, Bill Murray, and Ernie Hudson, lent their voices and likenesses in the video game. The Rookie doesn’t speak much and thats a good thing since the main theme here is the Ghostbusters. Other than voice acting the music is very well done with ghosts shouting and throwing their strange little powers at you. The sudden closing of doors, the slab of books moving in the air…. just matches the music very nicely.

Ghostbusters is really a great game. In fact it surprised me since when I first saw the game, I thought this would be another failure just like the majority of film based games are. But i am pretty pleased that the developers have proved me wrong. Ghostbusters reminded me of my childhood when I used to see their cartoons and would sing along their lines. Man, it really made me feel that I am a ghostbuster in real life. Fans of the movies and cartoons just can’t afford to miss out on this, and for those who are getting fed up or bored with super heroes flying around its time you buckle up and be a Ghostbuster.

The game gets over too soon,You dont get to drive the Ecto 1, Some of the boss battle are a cakewalk

Final Verdict:
SUPERB
Ghostbusters is really a great example on how a movie based game should be made and it really makes you feel that you are busting ghosts in real life.
A copy of this game was provided by Developer/Publisher/Distributor/PR Agency for review purposes. Click here to know more about our Reviews Policy.