Guardians of Middle-Earth is being released to coincide with the release of the new Hobbit movies to the theaters. For the most part, Lord of the Ring games have been fairly entertaining, especially The Two Towers, but it has been quite some time since then, and even the MMO version wasn’t nearly as popular as it could have been.

If you’re going to select one company for tie-in games, you really should look no further than Monolith Productions. Back in the day they were responsible for Tron 2.0, The Matrix Online, as well as their own IP No One Lives Forever. If you have not played any of these games, you’re truly missing out on some great games with a strong element of storytelling. Monolith has clearly shown that they can be faithful to the content of the tie-in but also expand to make an enjoyable experience.

There’s a deep level of game play set up that really needs to be appreciated. You can easily ignore strategy and go for a hack and slash style but you’ll quickly find yourself the only one dying. This game pulls away from your crappy hack and slashes fest and proves that if you can play it cool and try not to die, you will be rewarded by skill and enjoyment.

The gameplay is broken down into 2 parts, in-game and in-lobby. In-game is pretty simple with a straight forward layout for buttons which are mapped to special skills that take time to regenerate. You still have a basic skill that is strong enough to get the kills you need in order to drive the forces back. When you level up on the battlegrounds, you can upgrade skills and to be fair, each battleground starts every player at level one. Players can level up by killing armies, controlling points, destroying towers, upgrading towers, killing other players, and the list goes on. Matches are 5 players per side, and the Battlefield throws out armies for each side. When you upgrade your towers, you upgrade your armies and you can only do that after you’ve leveled up yourself. 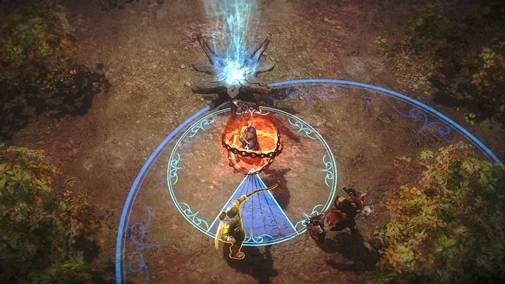 After a match you can get experience points for certain skills, and yes you can even get points for having the most deaths. These points level up your rank and unlock more skills for you. Certain ranks unlock slots on your D-pad where you can map extra perks that you’ve earned from some battles. You also get in-game cash which can be used to buy gems, relics, potions and more characters. In the lobby you can also create your own load outs for characters by building your own belts. If that’s too much work, it’s quite alright seeing how every character has their own load out. So when you select a character to play you can either select their default load out or use a custom one.

There are also a huge amount of characters to choose from. The game does not stick to only one series as you can pick from either good or bad from Lord of the Rings all the way to the Hobbit movies. By default you start with some good characters like Gandolf, and there are also characters of the week. Once you get enough money you can buy characters like Goluum or Dori.

In the lobby you can either jump into a quick match or select from Battlegrounds, Elite Battlegrounds Skirmishes, or custom matches. You need to rank up in order to play Elite, but they all have some commonalities. The most you can have is 5 versus 5 in most matches, but in certain selections, the slots can be filled by AI if a user doesn’t jump in. This helps from having people wait forever for a person to join. In a few matches I ended up being the only real person playing while all the other slots were filled with AI, and let me tell you, they’re good. 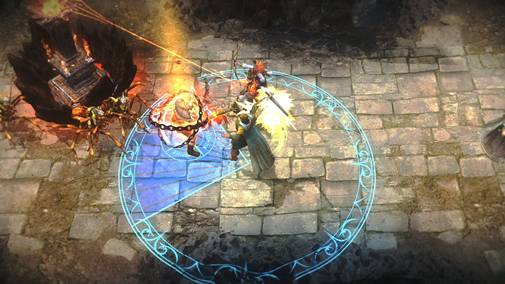 Rounding out the package, the art is top notch. The intro cinematic is pretty impressive, and the in-game characters all have a high level of detail. The battle arenas are all built the same, seeing how the game play doesn’t change, but each level can be different depending on trees, shires, and other cool details.

If there’s anything negative to say about the game, it’s too bad there’s no offline campaign. Monolith is fantastic with their story telling, and no doubt they could have easily developed an entertaining campaign. Although there is no direct single player mode, you can create a custom match to play only AI, and it’s pretty satisfying.

If you’re in the mood for a well developed PVP game, don’t throw your money at those other knock off games. Guardians of Middle-Earth is the game you want. It may lack a single player campaign, but you have options to play the game by yourself if you want. There’s deep enough strategy that makes you avoid the clustering of a death match, and allows you to really think about how to win, rather than how to kill. Intuitive button mapping, leveling up in and out of the battle grounds and great artwork makes this game stand heads above the rest.

Final Verdict:
SUPERB
Guardians of Middle-Earth breaks away from other PVP’s with an in depth strategy and leveling system both on the battle grounds and in the lobby.
A copy of this game was provided by Developer/Publisher/Distributor/PR Agency for review purposes. Click here to know more about our Reviews Policy.