Gunstar Heroes is a classic side-scrolling action game that was originally released on the SEGA Genesis system.  It was a blast to play back in the early ’90s, and it’s still a bundle of fun today.  The game’s setting is a futuristic world in which the player is pit against waves of robots, soldiers, and technically advanced bosses.  The action is very fast-paced, as there are very few times when the player isn’t firing one of it’s four interchangeable and mixable weapon types at the oncoming assault. 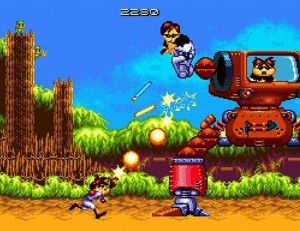 Using different weapons against different enemies proves to be the most effective strategy, which breaks up the monotony of waves of enemies as well as makes experimenting with weaponry fun at times.  Players are able to hang from ledges as well as throw both enemies and allies across the screen.  The game really shines in its boss battles.  The bosses are unique and require you to think of a new strategy each time you face a new one.  Playing the game with two people (either on-line or off) makes these boss battles that much more fun, because no two players employ the same strategies to defeat the bosses. 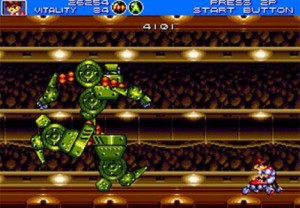 As can be seen in the above pictures, Gunstar Heroes and its 16-bit graphics haven’t aged all that well over the years.  Sound effects for the game are about what could be expected, and match the old school graphics.  When you first boot up the game, the graphics may be a bit distracting because of their age, but after playing for a few minutes the action really takes over and makes you forget how old the game looks.  For those looking to boast, the game offers online leaderboards as well as several fairly easy trophies.  The game isn’t all that challenging, and in the end there’s really only a few hours of gameplay to be had here.  It’s a fun few hours though.  The last string of boss battles in the game really exemplify the pinnacle of side-scrolling action games in the early ’90s.

Fast-paced action, On and off-line multiplayer, A classic game

Final Verdict:
FAIR
Gunstar Heroes brings an old school SEGA hit to the Playstation Network.
A copy of this game was provided by Developer/Publisher/Distributor/PR Agency for review purposes. Click here to know more about our Reviews Policy.