All you need to know about Halo 4. 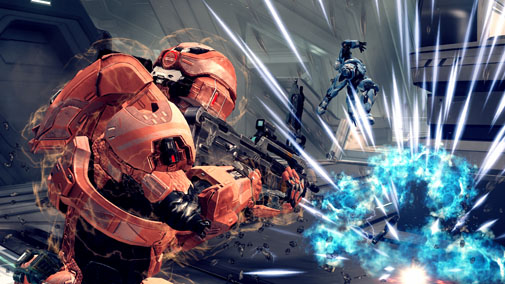 Halo 4 is one of the biggest games of this year and one of the biggest games Microsoft has ever made, and it’s something that people will undoubtedly play for a long time. It’s also a fact that there are a lot of unlockables in the multiplayer component of the game, which includes Spartan Ops, one of the new episodic format of co-op gameplay 343 Industries have introduced in the game.

The game itself is qood with our reviewer giving it a glowing 9/10 score.

“To summarize, any fears that Bungie’s departure and the return of one of gaming’s most iconic characters would be detrimental to this follow up have been allayed; Halo 4 is an essential purchase and a definite contender for Game of the Year. Suit up solider,” wrote our author bojeeva.

Before we begin, take a look at the achievements for the game. Most of these seem straightforward but the multiplayer ones will take months to get just like the previous Halo games.

13. Skullduggery (15G) — Completed any Campaign mission with 3 or more Skulls on Heroic or harder.

15. Bromageddon (40G) — Completed the Campaign cooperatively on Heroic or harder.

19. Midnight Launch (20G) — Got significant air in the Warthog at midnight in mission 2.

20. This is my Rifle, This is my Gun (20G) — Carried a UNSC weapon all the way through mission 3 on Heroic or harder.

21. Bros to the Close (20G) — Completed mission 4 without one preventable Marine death on Heroic or harder.

22. Mortardom (20G) — Hijacked a Wraith and used it to kill at least four enemy Wraiths in mission 5 on Heroic or harder.

23. Explore the Floor (20G) — Tricked or forced a Hunter to fall to his demise in mission 6

24. Give Him the Stick (20G) — Took out both Hunters using only the Sticky Detonator in mission 7.

32. Dedicated to Crimson (80G) — Completed all chapters in the first 5 episodes of Spartan Ops on any difficulty.

35. No One Left Behind (20G) — Saved at least one Marine in Chapter 3 of Episode 2 of Spartan Ops on Heroic or harder.

36. Knight in White Assassination (20G) — Assassinated a Knight in any Spartan Ops mission.

37. What Power Outage? (20G) — Completed Chapter 4, Episode 5 of Spartan Ops without losing a generator on Heroic or harder.

45. The Cartographer (5G) — Created and saved a Custom Map in Forge.

Finish the entire campaign with the help of the video guide. There are eight chapters in Halo 4 with most of them being fairly easy to beat. You may have some problems in the higher difficulties but as I mentioned earlier the campaign is pretty easy.

However, here’s a playlist of all the levels in action. Watch them below if you are stuck in the game. The video walkthrough is courtesy of Youtube user theRadBrad and does not contain GamingBolt content.

“Halo 4” marks the return of legendary hero Master Chief, named by Fast Company as “one of the most popular characters in gaming history,”1 and aims to set a new standard for blockbuster interactive entertainment. Set four years after the events in “Halo 3,” Master Chief returns to confront his destiny and face an ancient evil that threatens the fate of the entire universe.

Halo 4 contains a lot of multiplayer unlocks including armor ones, specializations, commendations etc.

Halo 4 is a game that has a lot of unlockables in the multiplayer component. Most of these are the armor ones and we have ways of unlocking them all courtesy of a very hardworking group of Halo fans on Reddit, who have complied an accurate list.

Kudos to them, and full credit goes to them. Image credit: Reddit.

Warrior : Reach the Rank of SR-8

Defender : Reach the Rank of SR-21

Warmaster : Reach the Rank of SR-37

Infiltrator : Reach the Rank of SR-42

Enforcer : Reach the Rank of SR-50

Assassin – Reach the Rank of SR-32