Learn everything you wanna know about Halo 4 Prometheans.

Posted By Kartik Mudgal | On 09th, Sep. 2012 Under News | Follow This Author @KartikMdgl 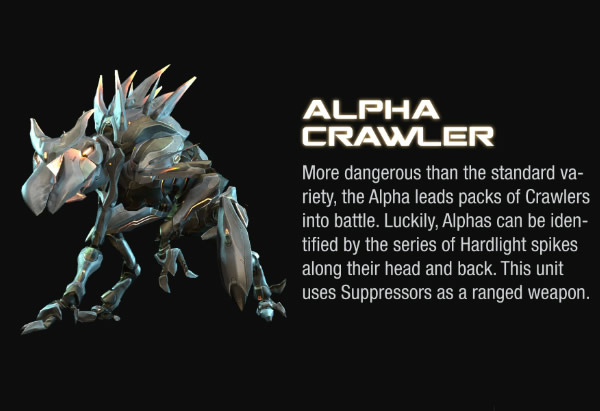 People following 343 Industries’ Halo 4 will be familiar with the information that Halo 4 will be introducing a new race called Prometheans. This race features an all new set of cool weapons and an entire group of enemy class which is nicely designed and look threatening.

Knights will be the main enemy you’ll be facing and they’re described as the Captains of the Promethean force. There are 4 different classes of Knights which all look unique and feature a great set of abilities.

The weapons are not too shabby either with guns like Binary Rifle, Incineration Cannon, Light Rifle, Scattershot, Supressor, Boltshot and a sole grenade called Pulse Grenade. You can check out all these enemies and weapons in detail, along with a spectacular tank footage shown at PAX 2012 below.

It is clear that 343 Industries have put a lot of work into this game, and it might truly rival Halo 2 when it comes to positive fan reaction. Halo 4 comes out on November 6 exclusively for the Xbox 360.

Knight
The captains of the Promethean force, the autonomous and intelligent Knights are ancient warriors tasked with defending the artificial world called Requiem. An encounter with a single Knight can turn deadly, as they systematically bring more enemies into the fight. Knights wield weapons like the Suppressor and LightRifle.

Knight Lancer
Utilized primarily as scouts and marksmen, Lancers are extremely accurate even at a great distance. Among their many skills, Lancers utilize Promethean Vision to track targets even when they’re behind solid objects.

Knight Battlewagon
Rare but incredibly dangerous, Knight Battlewagons are deployed when other Promethean forces have failed. Their huge metal frames are draped in heavy armor and hard light shielding, and these deadly combatants are capable of deploying their own Autosentries. Even getting close to a Battlewagon is a challenge. That’s especially true as the robotic Promethean uses its Scattershot against approaching threats.

Watcher
These flying robotic creatures emerge from the armored shell of Knights. Once active, they can ressurect Knights, summon Crawlers from the bowels of Requiem, create shield to protect other Prometheans, or attack using their most common armament, a Boltshot.

Crawler Snipe/Crawler
The most common Promethean on Requiem are the Crawlers. Crawlers are extremely agile and move in packs. They can swarm an enemy and tear them to pieces, or utilize a Boltshot from a distance.

Alpha Crawler
More dangerous than the standard variety, the Alpha leads packs of Crawlers into battle. Luckily, Alphas can be identified by the series of Hardlight spikes along their head and back. This unit uses Suppressors as a ranged weapon.

Light Rifle
The Z-250 is comparable to both the human DMR and Battle Rifle, allowing for burst fire when shot from the hip and precision targeting when scoped.

Scattershot
A shotgun with ricocheting shot has terrifying killing potential, and that’s why the Z-180 Close Combat Rifle gained popularity in the latter part of the Forerunner war against the Flood.

Suppressor
The automatic fire of the Z-130 Suppressor made the weapon a favorite for Forerunner troops fighting against the Flood. The weapon fires bolts of charged Hardlight that pierce and destroy organic material of any type.

Boltshot
The Z-110 Directed Energy Pistol is designed as a close-range precision weapon that devastates organic matter. Historically, the Boltshot came into use at the end of the first century of conflict between the Forerunners and the Flood, and remained in use until the war ended two centuries later.

Pulse Grenade
It’s hard to overstate the strategic potential of the Z-040 Attenuation Field Generator. The grenade creates an area effect that slows vehicles and damages both shields and health. The pulse grenade is ideal of clearing enemies from cover and can reshape the layout of a battle. 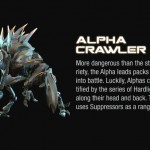 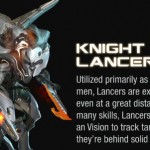 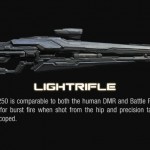 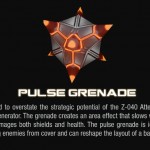 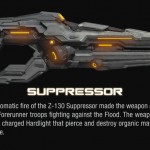 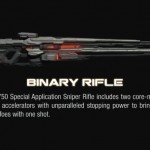 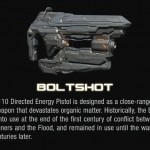 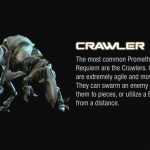 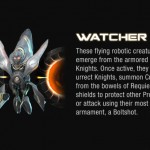 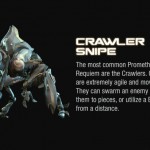 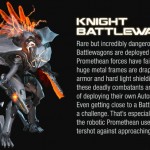 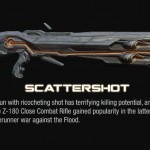 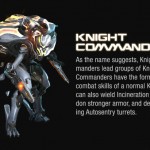 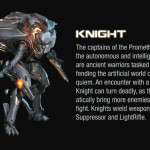 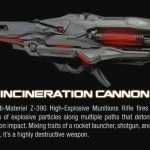 Also check out the tank special gameplay from PAX 2012.