2015’s Hard West from Creativeforge Games did a commendable job delivering an approachable strategy game that combined a spaghetti western setting drizzled with a thin layer of fantasy on top. It had its flaws and perhaps felt a bit too shallow to strategy veterans to really make a splash in the genre, but it was a solid outing, especially given how green the studio was at the time. Fast forward the better part of a decade, and now we see Ice Code Games taking the reins for Hard West 2. In most ways, the sequel resembles its predecessor with grimey characters, a relatively simplified series of gameplay systems, and a strictly similar setting and tone. Hard West 2 does show signs of evolution though, with a bigger game, better challenge, and a bit more depth.

For those unfamiliar with more strategic turn-based games like this, Hard West 2 is a welcoming on-ramp. The initial cast of characters are similar enough to feel like you can learn them all at once, but different enough to pick up on where their individual strengths lie. Same deal with the enemies. The first few battles will play out similarly, only introducing more elements like elevation, different types of cover, and new weapons very incrementally – giving you plenty of time to get used to managing each characters’ action points and building up bravado as you clear different areas of enemies.

"In most ways, the sequel resembles its predecessor with grimey characters, a relatively simplified series of gameplay systems, and a strictly similar setting and tone. Hard West 2 does show signs of evolution though, with a bigger game, better challenge, and a bit more depth."

You’ll also get a smooth introduction to the game’s secondary mode; the overworld. Here your party travels around on horseback from town to town, finding shops, new characters, resources, and side quests along the way. Most of the side quests end up being simple tasks like following a trail that leads to an optional battle or finding certain items that another character needs and getting rewarded for it, but they work as satisfying diversions despite their simplicity. They also help flesh out the gritty western story and give you more opportunities to earn loyalty from party members. While overworld sections in many similar games can easily wind up feeling like boring filler, Hard West 2 uses them to great effect.

The only gripe I have while playing through the overworld sections is that most of the dialogue is still unvoiced. The game focuses on several characters, but the main story is centered around Gin Carter, an outlaw and soon to be rich man – and it all works well enough without being a revolutionary tale in any way. Unlike a lot of games in this genre, the most important story moments are acted with above average voice acting thankfully, and those moments are well written which also helps sell the story and their personalities. That said, there is still a lot of reading, with most of the connective tissue between fully voiced moments playing out more like a game of dungeons and dragons than an actual video game, it can be a bit of a drag on the momentum of the experience at large. It’s a small gripe, I would argue, though.

The main treat is unmistakably the actual battles though. Thanks to the near-perfect pacing of progression for the level sizes, introduction of new enemy types, and general difficulty you never feel like you’re overwhelming the opposition and likewise are never totally at a loss of what to do either. A successful bullet ricochet off a barrel that kills an enemy and refills your action points is an exhilarating boost of dopamine that, if planned out correctly, can lead to a nice chain of one or two members of your party taking out a whole squad of enemies with style and ease. 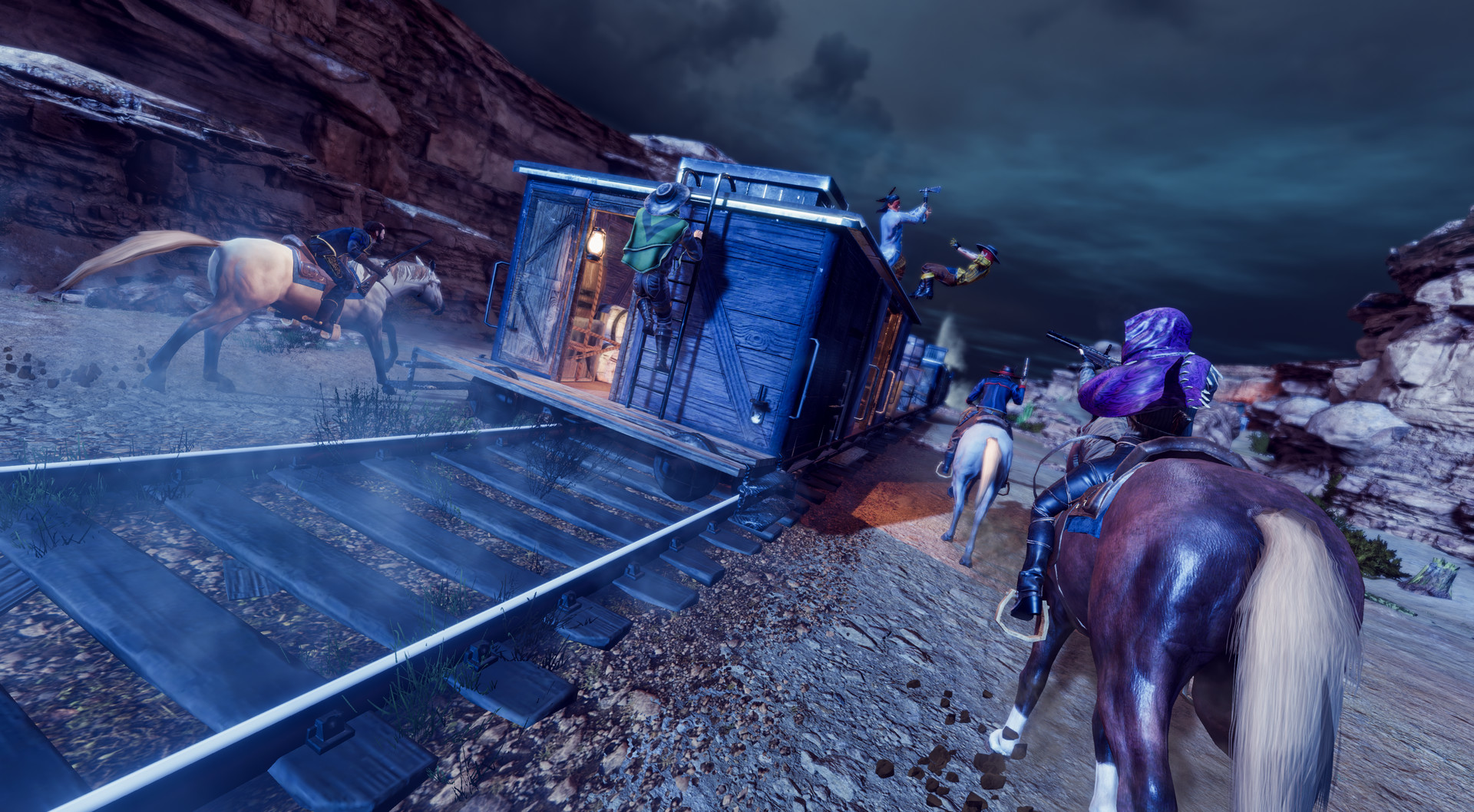 "The main treat is unmistakably the actual battles."

These moments become fewer and farther between as more evasive and challenging enemies emerge of course, but that makes achieving them all the more satisfying. After you get your sea legs, and enemies are debuffing you with magical attacks from across the map and you’re recalibrating your strategy to deal with the steadily increasing range of enemy types, the variety and depth of Hard West 2 becomes unmissable. Changing out different trinkets, weapons, and buffs for each character which come in the form of cards is a fun exercise in maximizing each party members’ talents and your interest in exploring those aspects grows as your options do.

As the enemy types and abilities at your disposal grow, so does the notion that this is not your typical western setting. Sure, the characters you see are largely based on archetypal western personalities with gunslingers past their prime, but as these characters interact with each other as well as the strangers you come across throughout your journey, they do open up into more complex characters than I was expecting. The same can’t really be said for certain NPCs that are interacted with multiple times though as shopkeepers and loners that come and go don’t ever have much to say outside of setting you up for the next chapter of the journey. They serve those purposes just fine though.

The art style might seem a bit at odds with Hard West 2’s gritty story at first, but once it really gets going, that feeling goes away. More major cutscenes use cool 3D comic book renderings that play with layering nicely at different speeds to show their depth, and end up holding your attention well. In-game the story is delivered much more casually with occasional voice overs and the aforementioned text boxes that aren’t really hindered or advanced by the artstyle. Gameplay looks good though, and with this particular look it should be pleasing to most eyes. What the environments and characters lack in detail they mostly make up for in style, which is arguably more important anyway. 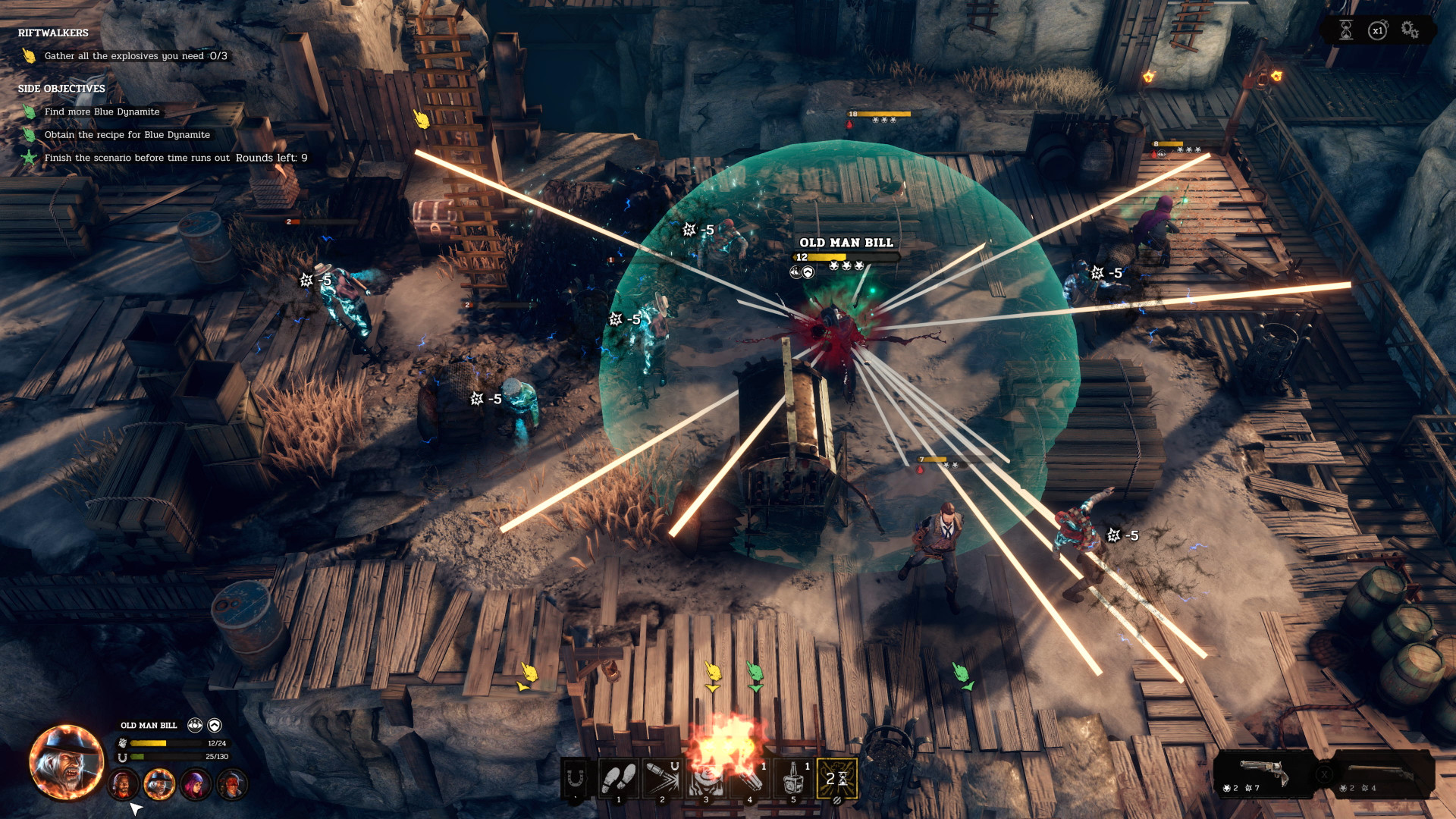 "What the environments and characters lack in detail they mostly make up for in style, which is arguably more important anyway."

There’s no denying that Hard West 2 hasn’t shaken its scrappy indie style. This is to the game’s benefit for the most part, as the unbridled creativity of the game’s writing and gameplay elements continue to flourish even more than they did in the original game. The price Hard West 2 pays for the freedom to be its own game is small compared to the rewards that are reaped from that trade. With a unique spin on its genre as well as its setting, combined with a great balance of being approachable and rewarding, Hard West 2 is a stand-out in its genre.

From small things like great sound effects and voice acting, to more fundamental victories like its mix of overworld exploration and solid strategy-style combat sections, there’s a lot to love here. Hardcore veterans are better taken care of with new layers of strategy and variety, while newcomers are still treated to a markedly more attainable experience than most of its counterparts in the genre provide. No attempt at that balancing act will ever be perfect, but Hard West 2 shows just how close you can get. With some inconsistent production values aside, Hard West 2 is a joy to play. If you’re a long-time fan of the genre or just passingly interested, this is one you’re going to want to take a chance on.

Final Verdict:
AMAZING
Hard West 2 brings the original game’s ideas to full fruition while sacrificing very little in doing so.
A copy of this game was provided by Developer/Publisher/Distributor/PR Agency for review purposes. Click here to know more about our Reviews Policy.