Heroes of the Storm Alpha Preview

Different but at the same time similar to DOTA 2.

Posted By Leonid Melikhov | On 22nd, May. 2014 Under Article, Previews | Follow This Author @Rengarious

Blizzard has decided to jump into the MOBA-genre bandwagon by introducing Heroes of the Storm. Currently the game is in its Technical Alpha stage with 25 playable heroes and 4 different maps. So how does Heroes of the Storm fare against other MOBA games in its current state and will the game prove itself worthy with its current free-2-play model? Find out in our preview below.

Heroes of the Storm plays similarly to games like DotA 2, however, there are a few huge game-changers that make this game standout from others and those are team-based levels, removal of item system and battleground maps. Instead of leveling your hero on your own, everyone on the team levels up at the same time by doing team objectives, capturing mercenaries, destroying forts, killing enemy players and enemy mobs. It’s an interesting twist because it makes team-play much more important than solo-play. It creates a new dynamic and a whole different level of competitive team play. 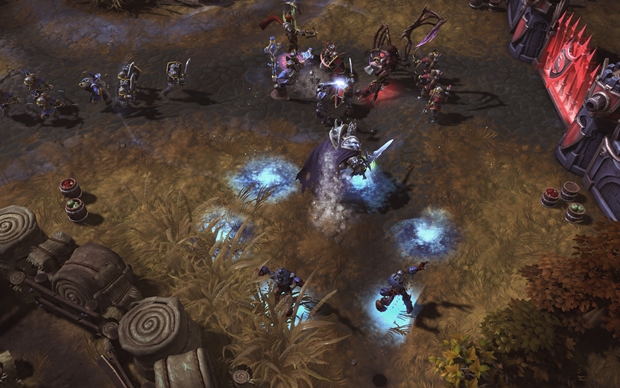 "Another interesting gameplay mechanic in Heroes of the Storm are the mercenary camps. By defeating numerous mercenary camps in different battlegrounds the monsters will join your team to help you push enemy towers/base. "

At first, removal of the item system was concerning, but overtime I began to like it and I eventually got used to the game not having any sort of items. The item system is replaced with hero talents. When you level up you get to pick a talent for your hero and decide whether you want him be more mobile, stronger or defensive. Each hero has different and unique talent choices for their main skills, while general things can also be chosen for other heroes as well. At the moment, some of the hero talents seem to be completely useless/never picked and most of them are cookie-cutter builds. However, this is Technical Alpha and balance changes will be happening on the go.

Another interesting gameplay mechanic in Heroes of the Storm are the mercenary camps. By defeating numerous mercenary camps in different battlegrounds the monsters will join your team to help you push enemy towers/base. It’s an excellent way to use them as distraction or even full-on aggression across all lanes when your team is ready to engage in a team-battle.

Heroes of the Storm currently features 4 different battlegrounds that consists of different main objectives. For example; Dragon Shire battleground has 3 different lanes with one tower on top and one on the bottom. Whichever team is in control of both towers now has the ability to become a player-controlled Dragon Knight from a statue that is located in the middle/center lane of the map.

Blizzard has also created a pirate-themed battleground called Blackheart Bay. In Blackheart Bay players are required to collect doubloons from pirate chests, mercenary camps and objectives. Once a certain amount of coins is given to Blackheart in the center of the map, the pirate will start bombarding the enemy team, causing major damage. 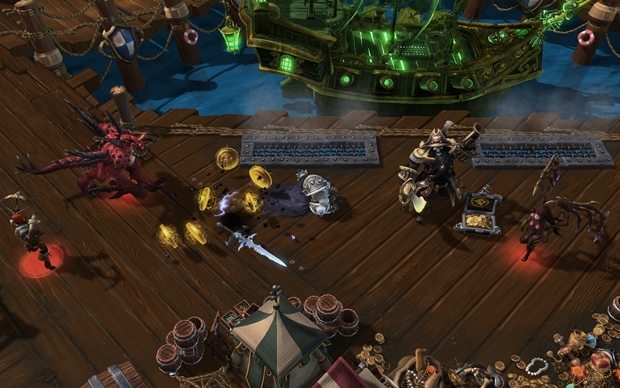 "The alpha build currently only features a total of 25 heroes that are all combination of Starcraft, Warcraft and Diablo. It’s a real treat, especially for those people who have played Blizzard games since the beginning of time."

These types of different Battlegrounds create an interesting diversity and a new form of team-play depending on the map that is being played. Teams now have to come up with different strategies and hero combinations in order to be as efficient and successful as possible. This is something that Heroes of the Storm has over other games in this type of genre.

It’s nice to finally see all of our beloved and most iconic characters from our favorite universes from each of the Blizzard games. Seeing Diablo fighting a dwarf from the Warcraft universe is quite fascinating. The alpha build currently only features a total of 25 heroes that are all combination of Starcraft, Warcraft and Diablo. It’s a real treat, especially for those people who have played Blizzard games since the beginning of time. Majority of the rosters consists of Warcraft characters due to the simple fact that Warcraft has the most expensive lore and the largest world as opposed to StarCraft or Diablo. However, the future will bring a ton more heroes for each universe and I cannot wait to see my favorite characters to be playable.

Each hero is unique and has his/her own lore as you’d come expect and of course their signature ability-set that you’d always wanted to see in action and finally get the chance to do it as a player. For example; Falstad is the leader of the Wildhammer dwarf clan from the Warcraft world. He is most well-known for the deep Wildhammer lore, his trusty golden gryphon and of course his hammer that has lightning powers.

He is one of my favorite heroes to play and his ability-set is quite nice, however; he is easily kill-able if you’re not careful with him due to the simple fact his not a tank and is one of the squishiest heroes in the game. Meanwhile, a hero like Diablo is tank who can take a ton of beating. Diablo’s damage output is not very high, but he has great ability to turn tides of battle thanks to his crowd controlling abilities and massive amounts of health. 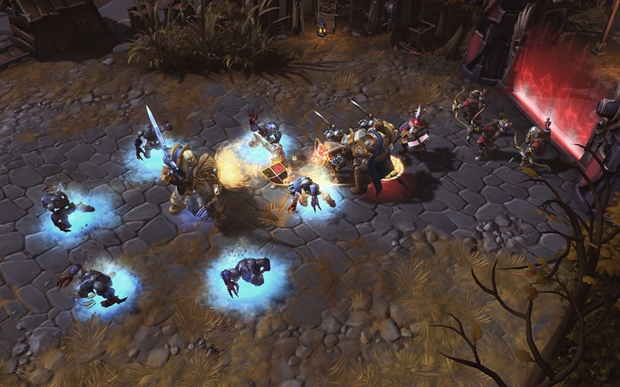 "The game also has a hero questing system where playing a certain hero for a specified amount of time awards a ton of leveling experience and color tints for that particular hero."

Every hero in the game is classified as a Melee Warrior (Tank), Assassin (DPS/Damage Dealer), Support (Healer/Buffs) and Siege (Unique Abilities). Gazlowe is considered to be a Siege hero because he is not a tank or a damage dealer. Instead, he specializes in capturing mercenary camps really efficiently on his own at the start of the game. He also has a stun trap and he can place turrets that can act as defense/offence depending on the situation. His main power can also deal a-lot of damage to enemy heroes if done and timed correctly. Because of his power-kit he is considered to be a Siege hero as opposed to be a full on Melee Warrior, Assassin or a Support class. Siege heroes in Heroes of the Storm are completely unique.

Currently, the level cap is level 40. Every time a player levels up he/she earns gold that can be used to purchase and unlock heroes in the store. Players earn experiences from playing matches, winning games, bonus experienced for playing on weekends and completing daily or hero quests. Daily quests can consists from asking you to play a hero from a specified universe, specific class or just playing a certain amount of games for the day. Players can stack up to 3 daily quests in a single day if they haven’t played the game for 3 more days which gives them a chance to catch up on their experience.

The game also has a hero questing system where playing a certain hero for a specified amount of time awards a ton of leveling experience and color tints for that particular hero. Each hero has a total of 6 quests to complete, first quest asks you to play 2 games, then 4 games, 10, 15, 30 and finally 40. In order to complete all the 6 quests, the player is required to play a total of 101 games. Once all of the 101 games are complete, the player has fully 100% finished quests for that hero. Currently, it’s quite a grind and it would be nice to see more variation for Hero quests as opposed to just playing games with them. However, this is Technical Alpha and Blizzard has stated multiple times that the questing system will be receiving a huge change in the near future. 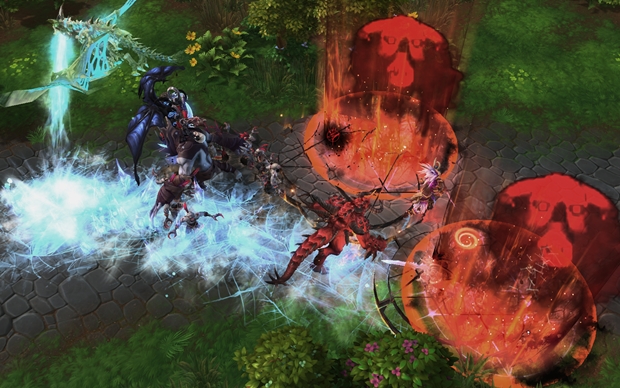 "Overall, the Technical Alpha of Heroes of the Storm is doing well and I believe it will be a solid game once it’s ready for public release. Most importantly, the gameplay is great, game is beautiful and seeing heroes fighting cross-universe is fun."

Gold allows you to buy heroes in the store with in-game currency as opposed to real world money. Blizzard has also provided multiple bundles that contain different sets of heroes, mounts and skins. Mounts and Skins cannot be bought with gold and can only be purchased via real world money. Currently, the prices are a tad high according to many people that I’ve played with, Blizzard has stated that they’ve agreed that prices are a-bit high and changes will be commencing soon.

Overall, the Technical Alpha of Heroes of the Storm is doing well and I believe it will be a solid game once it’s ready for public release. Most importantly, the gameplay is great, game is beautiful and seeing heroes fighting cross-universe is fun. However, the game still needs balance fixes, questing system changes, price adjustments and battleground objective balancing.

What I can say is that I enjoyed playing the game for hundreds of hours and I am looking forward to all the changes and fixes and new additional heroes that Blizzard will be adding sometime in the near future. Stay tuned for more updates on Heroes of the Storm and our review of the game once it launches.

Tagged With: Blizzard, Heroes of the Storm, pc