The inappropriately-named Hundred Years War (it lasted 116 years from 1337-1453!) is the subject of UK-based Slitherine Software’s latest offering, a real time strategy game that’s more than a little reminiscent of the acclaimed Total War series. But besides the fact that you control huge armies and decide their fate through your choice of tactics, that’s where the similarities end.

Thankfully for us console owners, the developers have made Great Battles far easier to grasp, with simple controls and a brief tutorial explaining all you need to know about flanking, routing and fighting. Relive the Hundred Years War – more interesting than it sounds!

It’s an impressive package: vast armies can be onscreen at any one time with over 40 different unit types. What’s more, you can take part in some 70 Medieval battles in campaign mode – including 26 historically accurate encounters. If you fancy altering history, you can replay the missions to your heart’s content to hone your skills. And to top it off, you get some background information about the reasons behind the war thanks to documentary clips taken from the titular History Channel.

You can ease yourself in with the slightly easier English missions – fighting under the Black Prince, Henry V and others from history – or opt for tougher French campaign where you battle for Joan of Arc and the King. And besides the substantial campaign, there are also skirmish maps and a two-player online multiplayer mode.

From the opening map screen from which you pick your fights, you’re transported to the battlefield where your armies are waiting with baited breath for your orders. Missions vary considerably in difficulty, from fighting a crowd of unsavoury peasants to reaching a money-laden wagon or facing huge armies. To help you on your way, Battlecards can be earned and deployed to give selected units a temporary boost during a skirmish – each bringing historical effects to the battlefield. Win a battle and you get extra cash, weaponry, more advanced units or XP, which can be used to strengthen your armies via the Army Camp screen. Archers, infantry and cavalry can be individually customised – everything from their armour, weapons, shields, livery or fighting skills! You’ll need to set a fair bit of time aside to get a grasp on all the options – but invest the time and you’ll build an awesome army. 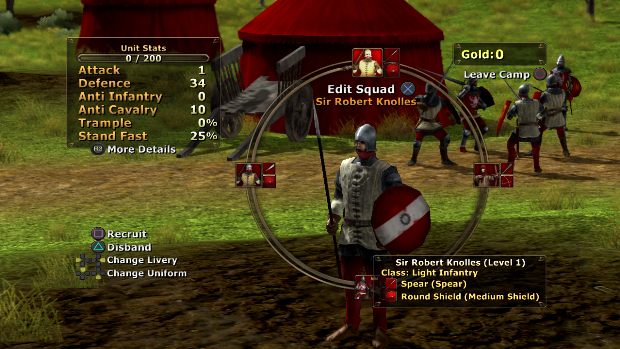 The game is turn-based, requiring you to prep and position your armies before sending them off to war. It is a little stop-start perhaps but this aspect by no means reduces the pace of the game – your carefully planned orders can be instantly undone by the opposing AI, forcing you to quickly re-evaluate and redeploy your troops. Suffer too many casualties and your well-laid plans will fail. Fatigued units with low morale may rout and flee from the battlefield, an enemy flanking your position will decimate your ranks, and woe betide you if you let your general fall.

Moving the various units can be troublesome – some of your men aren’t the brightest and will remain stuck to the spot waiting their path to clear rather than walking around an obstacle. It’s also a little irritating that you can’t group squads together as you could in Command & Conquer for example, to make the whole movement and order giving process less trouble.

Aesthetically, it’s not going to win awards but it’s by no means ugly. The units’ animations are decent enough and the various screens are colourful and detailed – but it lacks a certain amount of gloss and finesse. Take, for example, the History Channel TV clips that punctuate the missions and explain the background to the conflict. Undeniably, it’s a nice addition but they’re terrible quality and the grainy, low-res look detracts a little from the game. But I’d wager that most players would skip many of these anyway to get straight into the action, so it’s not a dealbreaker. There’s plenty of replay value thanks to the extensive campaign and multiplayer options; lucky PC owners are also able to create their own missions, maps and units.

This certainly isn’t your typical 360 or PS3 game – but that’s really part of its charm. If you’re done with FPS games and fancy something a little more cerebral then this is well worth a go. My only caution would be whether there’s enough game and variety in there to justify picking this up at full price. Had this been downloadable or a budget title, then it would be a great addition to your collection. As a new, full-price release, it’s maybe worth a rental first. A great game and a nice change from the norm but maybe wait until you can get it for a lower price?

Easy to grasp and dive straight into a large-scale battle. Plenty of longevity thanks to loads of units, missions and customization.

Doesn't look like a full-price release. May not be a lot to keep everyone engrossed and can get repetitive. Grainy, low-res video and poor presentation.

Final Verdict:
FAIR
A turn-based strategy RPG for consoles makes a refreshing change but mediocre graphics, a lack of polish and the subject matter may put off some gamers.
A copy of this game was provided by Developer/Publisher/Distributor/PR Agency for review purposes. Click here to know more about our Reviews Policy.