Note: Reviews for Homefront (PS3/Xbox 360) and Homefront (PC) have been written by different authors, so their views may differ. Please note that this is an individual review, not a supplement to the console versions’ review.

In today’s day and age, when First Person Shooters are such a dominant kind of games, and every other FPS tries to be like Call of Duty or Halo, it’s very hard to find innovative, fresh and different shooters. When I was told I would be reviewing Homefront for the PC, I was very skeptic at first. ‘I get to review another CoD rip-off? Awesome,’ was my initial reaction. I began playing Homefront, though, and I was in for a huge surprise. Yes, the action felt wholly familiar, and the shooting mechanics weren’t much different from conventional games in the genre, but Homefront turned out to be one of the most exciting, refreshing and innovative First Person Shooters I have played in a long time. 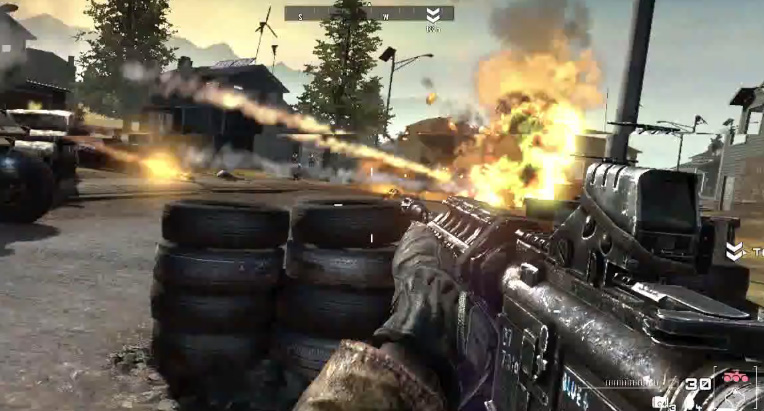 Home is where the war is.

The real creativity in Homefront doesn’t show in the gameplay or the action, but in the entire plot of the game, its setting and the way it is presented. Basically, Homefront is set in a ravaged 2027 U.S.A, with the joined forces of North and South Korea having attacked the American soil. The economy has boomed, and the fact that civil war tears at the country’s heart isn’t helping. Homefront drives home from its very beginning that it is a story driven game, and shows us the terror the Koreans have spread in the US by showing horrific scenes- parents being shot dead in front of their children, homes being bombed and people being killed mercilessly.

The game sets a dark mood from the very first minute, and it stays with us all throughout the campaign, and even after that. The story is so well developed, so intriguing, you will hardly ever find shooters with such qualitative narratives. But I guess that is to be expected when it’s being written by the mind behind Apocalypse Now and other great works.

The cutscenes of the game compound the cinematic feel of the story, having been directed wonderfully, with a Hollywood blobkbuster feel to them. Smart camera angles, intelligent use of the first person perspective and great dialogue make Homefront a largely cinematic experience, one that stays with the player long after he has finished the game. The extensive usage of acts of violence, blood and gore are disturbing, and in a way, more awesome than you could have ever imagined.

The real problems in Homefront come with the gameplay and the single player campaign. Don’t get me wrong- the single player campaign of Homefront is great. It has a ton of exciting action sequences, gallons and gallons of blood, some really exciting missions and other things you come to expect of a First Person Shooter these days. However, the campaign faces many issues. For one, it has got pacing issues. The story of Homefront is tight, and is wrapped up pretty quickly, which adds to the cinematic feeling of the game furthermore,  but it’s not paced properly. Certain events seem abrupt, and others feel like they were not built and developed properly.

There’s also a glaring lack of set-pieces and epic battles. Throughout the game, you will be battling enemies in narrow corridors, warehouses and other small-scale areas, but you will never come across any big set pieces, except for a helicopter mission which was awesome (while it lasted), and never will you be battling enemies in huge, extensive battlefields, as you would have been expecting from any shooter in the genre. I know Homefront is trying to move away from the conventional trends of the genre, but it would have been nice to have some exciting, epic battles or some breathtaking set-pieces.

The action, despite all its efforts to feel different, feels very similar to dominant forces in the FPS genre like, say, Call of Duty or Battlefield. The game tries to move away from the conventions by throwing elements like stealth and others into the mix, but they turn out to be minor distractions from the main shooting in the game, which is exactly what you come across in any other FPS. While playing a game like Homefront, a player would be expecting the action to be like something never seen before, what with all the hype surrounding it, and when it turns out to be exactly like the leading franchises in the genre, you do feel very disappointed. 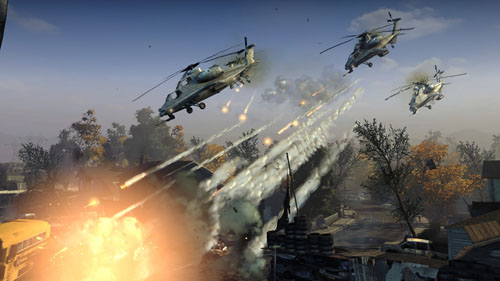 This is Homefront. Not Call of Duty. I bet you didn’t notice the difference until now. In fact, I bet you still don’t.

The most glaring flaw of the campaign, though, is that it gets over too soon. The average player can complete Homefront’s campaign in five to six hours, and the seasoned, hardcore shooter players can complete it in as little as two or three hours. Not only do you want more action by the time the game ends, because it just never throws any epic set-pieces at you, you also expect it to last a bit longer, because at an average four hours, the game just seems to end very abruptly. Not just that- with a four hour long campaign, no one would want to pay 50 bucks for the game.

The multiplayer component of Homefront, albeit a bit limited, is one of the most addictive one will ever see in any First Person Shooter. As I said, it is a bit restricted, with a very limited number of maps and game modes, and a hoard of freezing issues and bugs that hamper the overall experience, but it still is addictive as hell. The maps, although few in number, are very well built, conveying the hopeless, desperate condition of the US perfectly. Using vehicles like Humvees and tanks is a whole lot of fun. Respawning is a huge issue and seems to be a bit iffy, but the overall experience is just too addictive and enjoyable to be marred by these flaws.

In the visual and the sound department, though, Homefront fails to deliver properly. The graphics, while not ugly, fail to match up to competitors like Crysis or Killzone or Call of Duty, with bland textures and rough edges. The animations are a bit jerky. The soundtrack and the sound effects sound a bit off, and the voice acting and lip syncing are huge issues as well. All of these turn out to be very jarring, when you see how cinematic the game really is, and how well it presents its story. You expect sheen and shine from such games, not jerky and iffy production values. 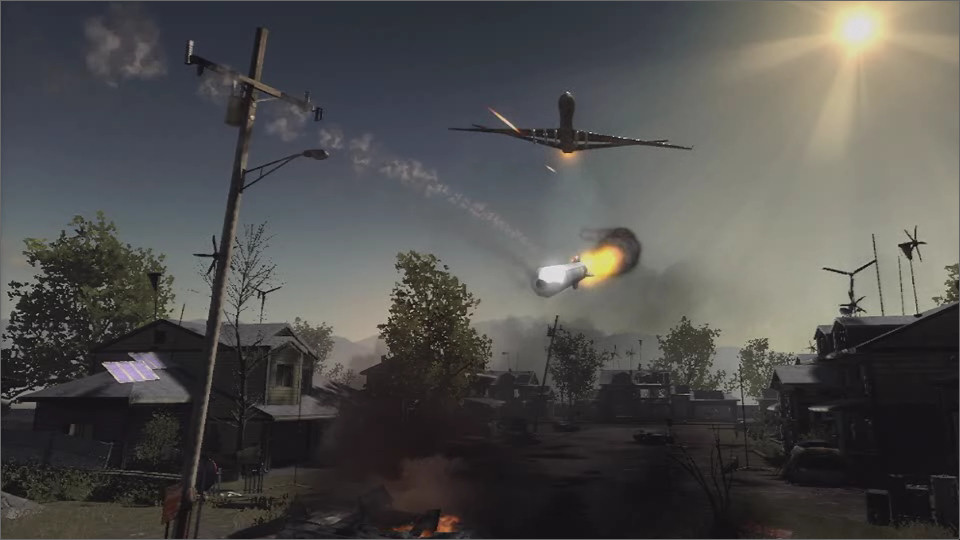 A lot of games these days are trying to be the “Call of Duty killer” or the “Halo killer.” Several new names, and some old ones, like Killzone, Resistance and Battlefield have made their marks, but no game till now really tried to do something different. Homefront came along and finally doing something new. While it did succumb to the “rip-off” classification in many aspects, it turned out to be an overall enjoyable, creative and immersive experience. With a brilliantly written narrative that is presented via very well directed scenes, and an immersive, well developed world and setting, with a great multiplayer component to boot, Homefront is a must buy for all FPS fans. The single player campaign disappoints in more ways than one, so here’s hoping THQ do decide to release a second Homefront game, and tackle all these issues with it.

Too short, lasting only around 4 hours; Graphics are a bit iffy sometimes; Gameplay can feel like Call of Duty way too much sometimes; No huge set-pieces or large scale battles; Sound, sound effects and voice acting are a bit off; Pacing issues; Multiplayer bugs

Final Verdict:
SUPERB
This emotionally charged game not only offers really addictive multiplayer mode, it also features one of the most exciting, fast paced and thrilling, albeit a bit short, campaign in any recent FPS. All the pros ultimately come together in more ways than one to deliver a solid, exciting game.
A copy of this game was provided by Developer/Publisher/Distributor/PR Agency for review purposes. Click here to know more about our Reviews Policy.