Those who have played the PC version know what I am talking about, and some of you may either be new to the game or just want to know how the game plays on its handheld counterpart.

Hotline Miami has a distinct style to it, when you look at the game, it instantly makes you feel and think about the early 90’s and top-down DOS games on the PC, which is a nice feeling to have, especially in 2013. Those who’ve played video games back in those days will remember how the games used to look and feel. Hotline Miami feels like an old-school addicting DOS game due to it’s pixelated top-down graphics and fast-paced gameplay. 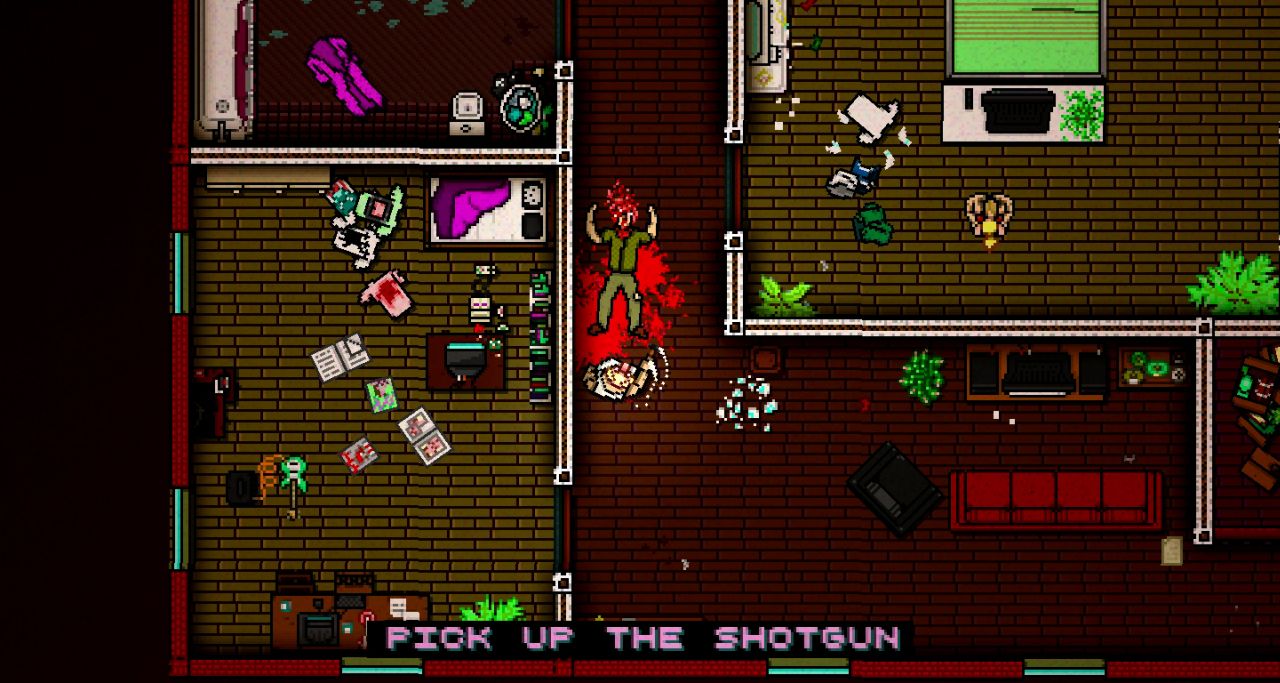 I would like to call this style ‘Retro’ and it goes well with the game, developers have actually tried to create something from the old era that is fun to play today. Hotline Miami has a catchy soundtrack and retro visuals that are inspired by the 1980’s culture.

The game even has a good plot that is both well-presented and intriguing all the way to the end of the game. I am going to spare you the plot details so you may focus on it when you decide to play the game. However, it is an interesting story that I think most people will enjoy due to the way the game is presented and where and when it takes place. Overall, Hotline Miami has a very strong presentation and is unique from anything else that you will find on the market today.

"What's awesome about Hotline Miami's combat mechanics is that you can use a combination of them to get through rooms as quickly as possible by chaining up a different type of attacks. "

Gameplay in Hotline Miami is something different what we come to expect from video games these days. It’s a top down retro stylized arcade beat-em up game. The game has twenty different chapter to clear with each one becoming more difficult and complicated to clear. The premise of the game is to clear a house/rooms of mobsters as fast as possible and as violently as possible.

Players can use doors to knock mobsters on the floor and then beat them up violently to their death with either melee weapons or bare-fists. Players may also pick up guns that have limited ammo to gun down other mobsters, you may also throw weapons across rooms to know enemies down and then finish them off while they’re lying on the floor.

What’s awesome about Hotline Miami’s combat mechanics is that you can use a combination of them to get through rooms as quickly as possible by chaining up a different type of attacks. For example, you can shoot one guy in the face and then throw your gun across the room to knock another guy out and then run up to the another enemy and melee them and then finish the rest of them off, and all of that will result in a satisfying combo and higher points for the chapter. 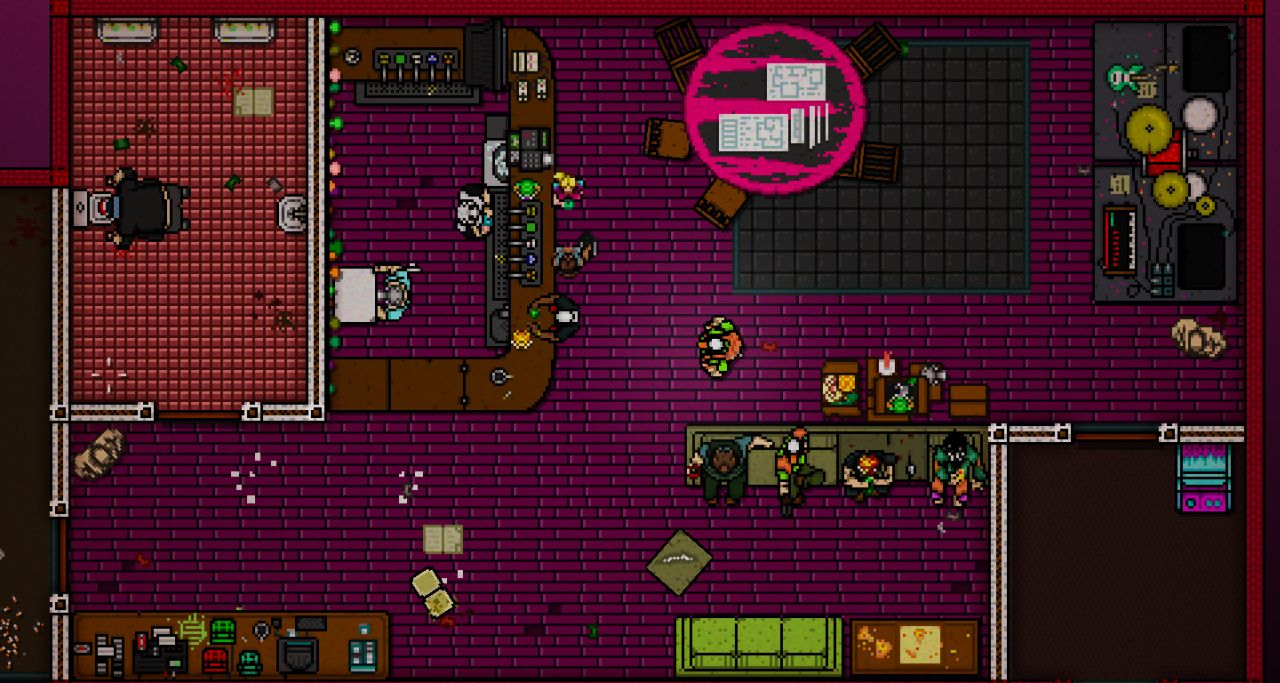 Another cool aspect about the gameplay is that as you progress through the game you will unlock different animal masks that your main character can wear. These masks are not just for different visual looks, each mask actually gives you different passive abilities. Depending on your style of play, you can choose the mask that you want for your advantage, particularly when you’re trying to achieve the highest rank in a specific chapter.

"One hit can kill you, so you must go through all the chapters without getting hit in order to progress. "

Hardest part about Hotline Miami is learning all the rooms and the enemy patrol areas. One hit can kill you, so you must go through all the chapters without getting hit in order to progress. Thankfully, once you have finished one stage in the chapter, the second stage will act as a checkpoint, and you don’t have to start over.

The difficulty is well balanced and also rewarding. Once you have finished a chapter you will be receive a final ranking based on how fast you cleared it, how many combos you pulled off and how many executions you did on your enemies.

Trophies in Hotline Miami consist mainly of completing the story-line, getting A+ ranks on all chapters, finding all of the melee weapons/guns and using them at least once and collecting all of the masks. The only ones that might give you difficulties are getting the A+ ranks on all chapters, it will take a lot of patience and skill to pull that off. There are also a couple of miscellaneous trophies such as getting 4x, 6x, 8x, and 12x combos and killing three enemies with one thrown weapon and even killing an enemy by throwing a weapon that got bounced off the wall. 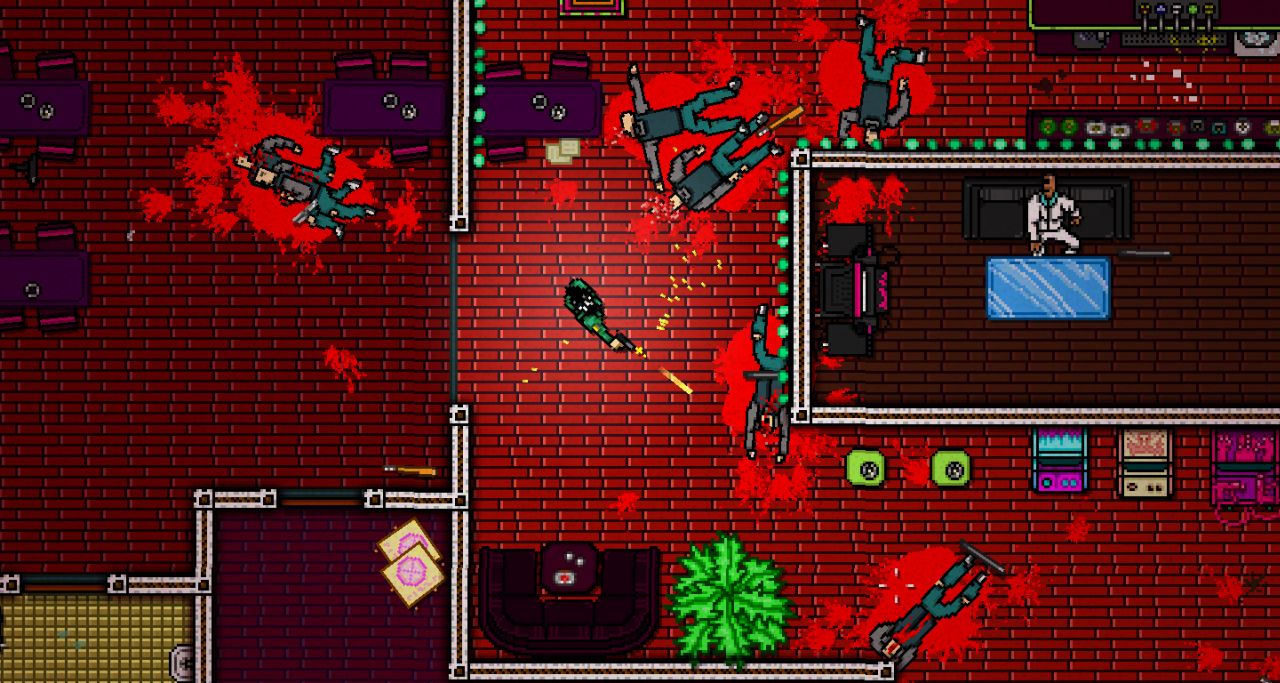 For the most part, majority of the trophies will come naturally with the exception of getting A+ ranks and finding all of the melee weapons and collectables, for those trophies you need to get on your way out in order to achieve the platinum. All in all, the game has a rewarding trophy list, totally doable and adds more replay-value to an already addicting game.

Hotline Miami is a fun, fast-paced top-down beat-em up action game that is rare to come-by and is a true gem, especially in today’s gaming market. Video games are currently saturated with first-person shooters, third-person action games, puzzle games and so on. There are not that many top-down beat em ups that are as unique as Hotline Miami.

Hotline Miami is a fantastic addition to the PlayStation Vita’s line up and is totally worth the purchase due to the fact that it’s a cross-buy game and features a single-trophy list for both platforms.

The game is not for everyone, some maybe turned off by the retro style graphics and top-down view.

Final Verdict:
SUPERB
Hotline Miami is already a huge success on the PC and now the franchise is available for the PS Vita owners. The game is addicting as ever, ultra-violent and satisfying. This is an amazing top-down arcade/retro beat-em up that you don't want to miss on your PS Vita.
A copy of this game was provided by Developer/Publisher/Distributor/PR Agency for review purposes. Click here to know more about our Reviews Policy.