How To Train Your Dragon Review

Anyone who knows anything about the games industry will be able to tell you two undeniable truths. That movie tie-in games always fail and that games directly aimed at children tend to be equally poor. How to Train your Dragon falls under both headings and is plagued by the faults associated with both, causing it to become nothing more than a mediocrity at best. Please note during this review that I have not yet had the pleasure of seeing the film this game is based on, and as such I may miss the finer points that this title has in common with its movie counterpart.

The game is set in a bizarre world that is very loosely based on Norse mythology. The land is populated by Vikings who live in harmony with various breeds of dragon. You play one of two curiously named Viking children and are tasked with looking after various dragons and using them to compete in a multitude of dragon fighting tournaments. That’s it. Right from the get go you are subjected to a set scenario that entails a tedious repetition of: train dragon and then fight. You do that three more times and that’s the game. A little bit of spice is occasionally tossed your way, with a typically ugly evil Viking child playing tricks on you to impede your progress. In terms of which spice this is I’d describe it as oregano; it might look nice, but it does little to alter the flavour of the dish. Whilst it may appear as a twist in the plot, rectifying these pranks that are played on you always results in a tedious fetch quest that does little to alleviate the lack of fun on offer. The younger players might enjoy just being in the same universe as there favourite characters from the film, but generally the plot is not the strong point of How to Train your Dragon.

As you complete the few fetch quests that are required you see more of the Viking village that makes up the game’s main hub. In terms of design, this single level is pretty linear. Combine this with a bland colour palette and quite uninspired graphics all around ad we have a game world that just feels dead. The dragons themselves look better by comparison giving a fun vibrancy that is lacked elsewhere. Still the animations on both the humans and the dragons brings this vibrancy down, looking considerably amateurish when compared to other titles. 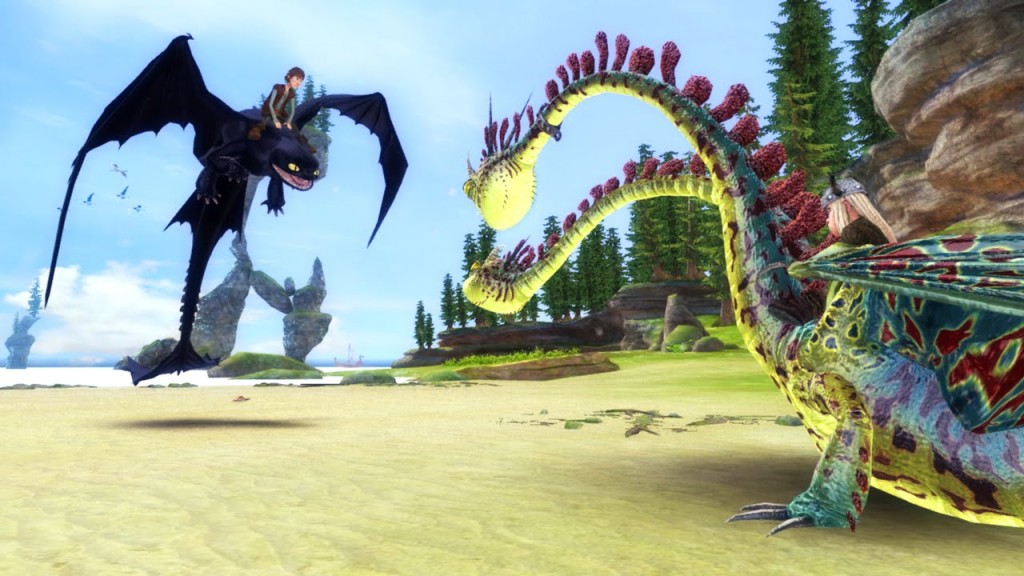 These dodgy animations do more than just hamper the visual aspect of the game, as their sloppy design typifies the combat in general. As the main gameplay element in How to Train your Dragon, the Dragon fights are a derivative disappointment. Considering that dragons are usually associated with the act of flying, I was hoping for some intense aerial dog fights. Instead I was subjected to a very rudimentary 2.5D brawler where, Surprise all around, the X button does a light attack and Y is for heavy attacks. Sure there are enough combos you can pull off, but the AI has a tendency to just block all the time making any combo other than XXXXX almost entirely redundant. 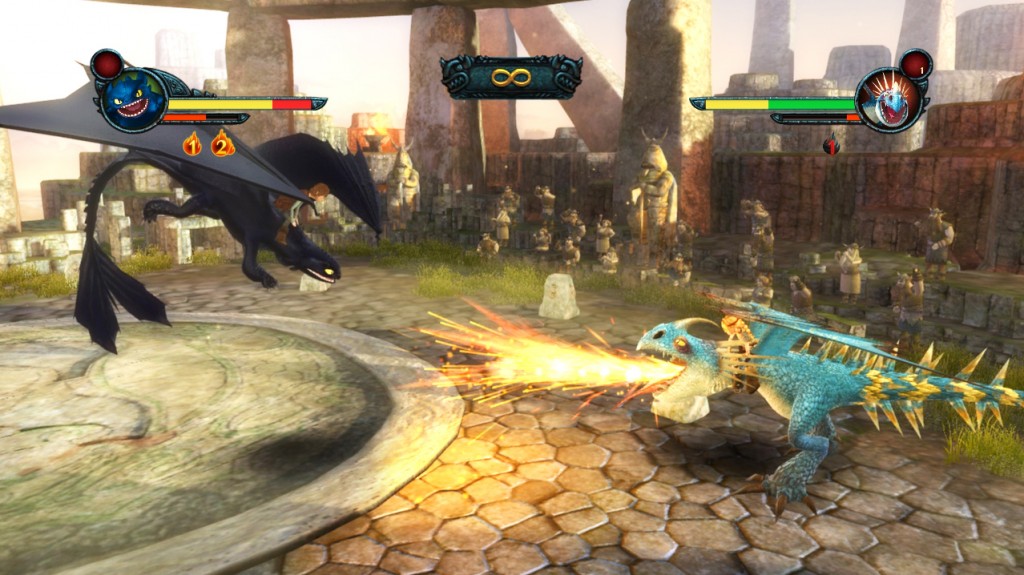 Spamming the X button will see you through most battles

I say there are a lot of combos on offer, but you can only unlock these by training your dragon. You can level up your scaled partners by either taking part in a host of dull QTE based mini-games, or by fighting in a Colosseum against a dummy AI who you have to beat using certain combos. I could just about stomach this when I had to do it with my first dragon, but as you unlock new pets as the game progresses you have to repeat the exact same training exercises with them as well. A poor design choice that makes the latter parts of the game seem even more like a chore to play. And while we’re on the topic of chores don’t even get me started on maintaining your dragons. They have bars for health, mood, trust and other stats that you have to keep high by giving them items. If you let these bars dip too low they start combat with less health. Sadly I found zero enjoyment in this task as it slowly becomes a guess of scrolling through the menu and spamming the A button.

Now we come to the aural aspect of the game’s presentation. First on the list is the background music…. What background music? It just seems too sparse, to the point where I may as well have turned my speakers off. The sound effects, whilst actually present, are equally as underwhelming. The voice acting is the worst of all, with awkward chunks of dialogue being needlessly repeated at various points during the combat. If I hear that little prepubescent pip-squeak say “You’re gonna knock the scales off of that thing” one more time… 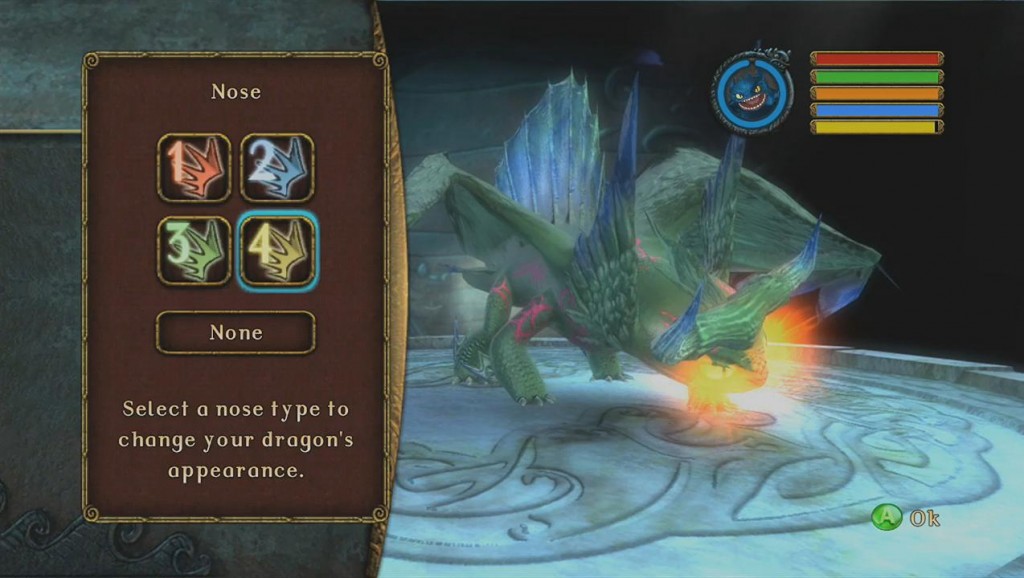 You almost spend as much time in the menus as you do in the game.

As I reached the end credits I was simultaneously glad to have been done with this horror and also disappointed by the relatively short staying power of How to Train your Dragon. Like an unsatisfied housewife, you too will find yourself asking “Is that it?” With a story mode lasting roughly five hours (that likely won’t keep you playing to the end anyway) and a frustratingly dull list of achievements/trophies, even the most financially carefree of us will be questioning their purchase of the game. If you can find a mate to compete against then there might be more fun on offer in the two player mode, but considering the limited nature of the combat, it is doubtful that your interests will be held for too long.

I know that the game is aimed at kids and that it’s not going to be as interesting for an adult mind, but when you stack it up against other great games with a U age rating How to Train your Dragon seems like a master-class in mediocrity. Games like Mario and Pokemon are how a kids game should be done, for even though these titles seldom deal with adult subject matter, they are always entertaining for both the young and old. Sadly How to Train your Dragon is not such a game. It’s a game for children, in that only a child would be able to neglect the sheer lack of ideas display. Even at a budget price, this is a game best avoided by all those over the age of ten.

Contains characters from the movie, The dragons look fun and vibrant 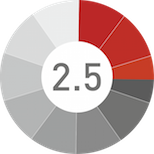 Final Verdict:
TERRIBLE
Marrying up the bad points of both film tie-ins and kids games, How to Train your Dragon reminds us of just how uninspired game design can be...
A copy of this game was provided by Developer/Publisher/Distributor/PR Agency for review purposes. Click here to know more about our Reviews Policy.