Hungry Giraffe is a very simple and straightforward game. Being a PlayStation Mini game, those two are kinda pre-requisites. You’re controlling a giraffe- a very hungry giraffe, as the name suggests, and the goal of the game is to keep the giraffe slithering towards the top end of the screen. You make the giraffe eat the food in his way to give him fuel and boost him upwards. Fail to eat for too long, or hit/eat something that isn’t meant to be hit/eaten, and your giraffe may fall out of the screen, giving way to the “Game Over” screen. That’s all there is to this game. Play Hungry Giraffe once, and you’ve basically seen all there is to be seen. While this lack of variety and innovation is definitely working against this game, it also makes for a simple and enjoyable experience, basically because what the game does, it does rather well.

You have to make sure that your giraffe eats everything edible that appears on the screen- from apples and strawberries to tacos and burgers. Eating food is what keeps the giraffe going, it’s what gives it strength to climb further upward. Some kinds of things give it more fuel than others- eating tacos will give you a larger boost than eating bananas. 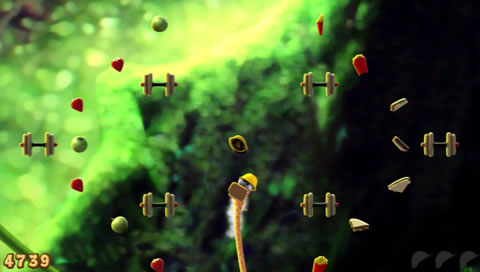 But that’s not all the giraffe comes across. There are anvils and hammers and dumbells and other such things which are placed dangerously close to the food, and you have to avoid them as best you can. If the giraffe eats these, it gets weighted down, its speed slows down, and the danger of falling out of the screen is higher.

Then there’re the poisons. Eating these poisons has adverse affects, with the giraffe throwing up all over the screen. This blocks your view, and while pills can reverse this condition, it’s best that you avoid poisons too. 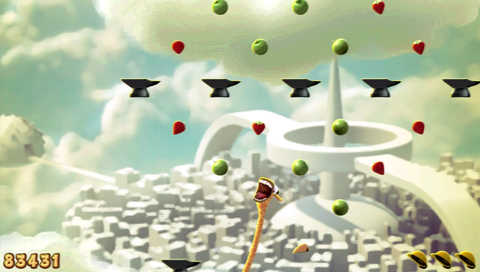 It’s a very simple premise, as you can see, and there really isn’t much to talk about. The game has a solid and enjoyable foundation, and you can pick it up and play it whenever you feel like and have tons of fun with it. It’s that kind of game. The visuals are charming and pleasant to look at, and the soundtrack’s nice. But there’s nothing out of the ordinary here.

Hungry Giraffe is a very ordinary, very simple game that won’t really stick out in your memory, but will give you several hours of enjoyment.

Final Verdict:
GOOD
Hungry Giraffe is a very ordinary, very simple game that won't really stick out in your memory, but will give you several hours of enjoyment.
A copy of this game was provided by Developer/Publisher/Distributor/PR Agency for review purposes. Click here to know more about our Reviews Policy.