Simulating the hunt but missing the mark.

In practice, Hunting Simulator 2 is exactly what it claims to be: a simulation for you to build and utilize your hunting skills to take down targets of all sizes, from small ducks to large bears. By searching for signs of animals, such as footprints or eaten vegetation, you track down these animals in the hopes that you can kill them in return for a varying number of credits or a trophy to put on your lodge’s wall. After a short tutorial sequence, you’re given free reign of how you want to take control of your hunting experience. It lets you roam its environments without mission markers or a voice in your ear, allowing you to hunt whichever animals you want however you want.

There are six zones to explore, spread across three locations in Colorado, Texas, and Europe. Naturally, the Colorado environments are filled with trees and hills, while Texas is mostly desert and Europe mostly marshes. They’re generally diverse in their layouts, and, while character and animal models are sometimes dated, the environments go easy enough on the eyes. The animal selections do vary slightly between hunting zones. Deer and Elk are more common in the forests, while ducks are rampant around water and coyotes roam the desert, though each environment has a variety of animals of all sizes.

"There are some limitations to your hunting. You have to buy and manage licenses to hunt in each of the three main locations."

There are some limitations to your hunting. You have to buy and manage licenses to hunt in each of the three main locations. If you don’t have a license to hunt a particular animal, you’ll be fined if you kill them. The same goes for if you use too many bullets or use an incorrect caliber gun. Frustratingly, almost all of the information regarding the limitations on hunting is left in your lodge, so if you happen to forget which animal can be killed by which gun, you’ll either have to make the trek back to the lodge or take a chance and hope the game doesn’t scold you when you finally have the animal in your sights.

The journey to find animals is generally the most monotonous part of Hunting Simulator 2. While the environments are expansive and diverse, they’re usually not filled with enough animals to make you think they’d become a designated hunting zone. More often than not I would spend long periods of time looking for virtually any sign of any animal, regardless of my ability to hunt them. In some cases, these sequences have a relaxing meditative quality to them, especially given their almost complete lack of music. In others, though, these sequences become boring because if you don’t have an animal on your radar, you really have nothing else to do.

There are hunting towers, blinds, and fast travel camps scattered around each environment, but they’re much less useful when you’re struggling to find anything to hunt. Even with the various animal whistles, having animals come to you is much less common than finding and tracking them on your own, and waiting for them to pop out becomes a tedious waiting game. To help you in your search on the ground, you have a dog companion by your side who can search for tracks and more easily follow the trail of other animals. While useful to locate hard-to-find clues, your dog’s abilities are inconsistent at best, and it has a tendency to pick up signs unrelated to an animal you’re currently tracking, throwing you off the pace more often than leading you there faster. 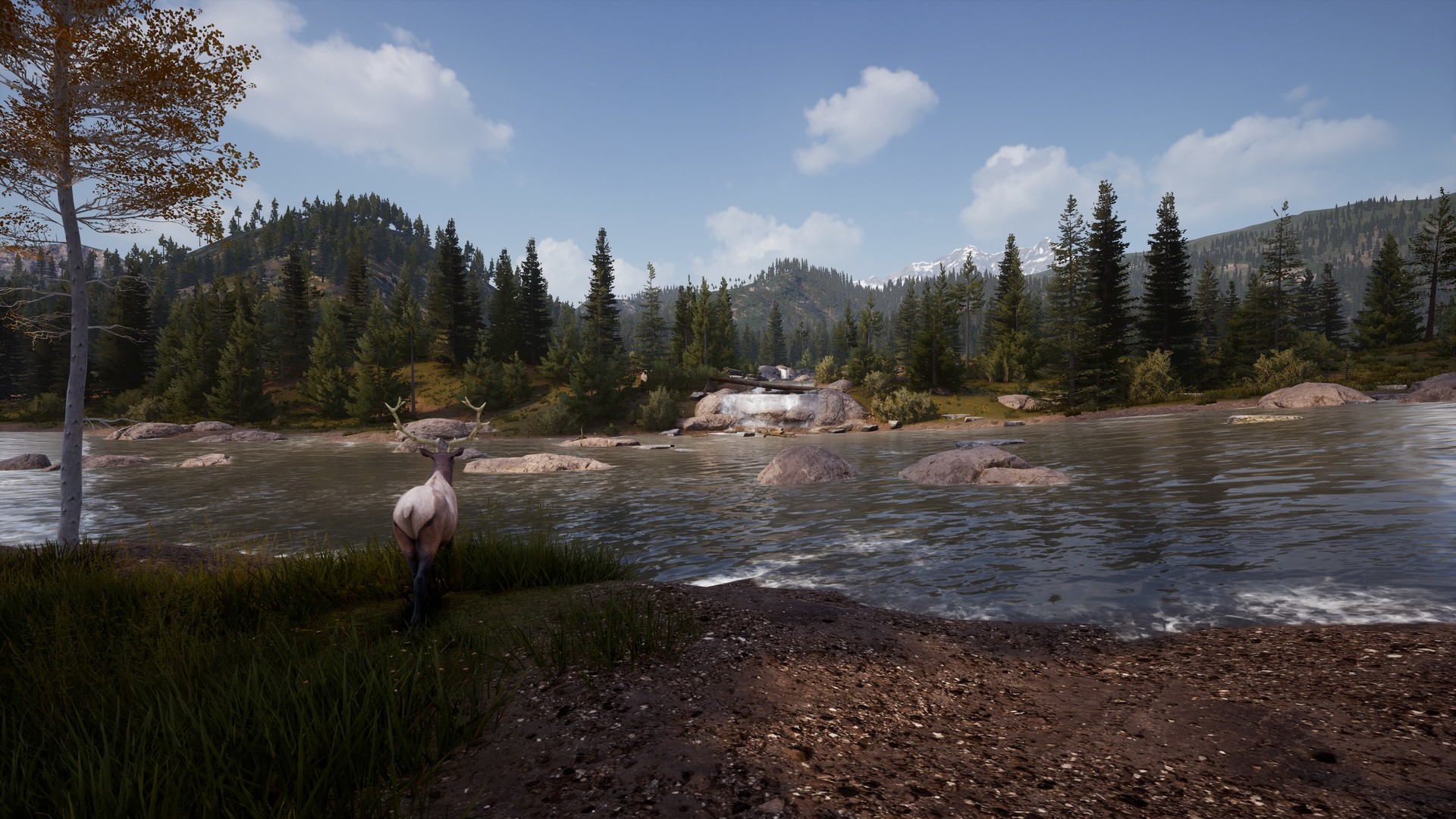 "The journey to find animals is generally the most monotonous part of Hunting Simulator 2. While the environments are expansive and diverse, they’re usually not filled with enough animals to make you think they’d become a designated hunting zone."

Even if you do find a sign of an animal, though, the game barely picks up. If you’re following tracks, you’re told which species left them and whether they’re new or old, though any combination of these is hit or miss on whether the animal is nearby. Sometimes fresh tracks lead you on a literal wild goose chase, while old tracks can lead you to the animal almost instantly. What commonly helps you find the animals is an icon that pops up intermittently when they’re within a certain radius of you. While these don’t appear for long, they help you locate the animals and speed up the tracking process.

The problem here is that this ultimately undermines any reason to track animals the way the game encourages. Being rewarded for aimlessly wandering an area by being shown the exact location of nearby animals renders any traditional searching and following tracks moot. While I did find myself glacially getting better at tracking and finding animals over time, this came as a result of personal discipline in forcing myself to do so, as the game didn’t encourage quietly tracking and hunting enough to offset the benefits from running around and hoping for icons. For people who want to use the traditional hunting formula, it will ultimately work, but the icons make the game feel like it’s holding your hand instead of allowing for the purest simulation experience and rewarding playing the intended way.

When you finally get an animal in your sights is when Hunting Simulator 2 truly peaks. While the journey to get there can be slow and sometimes painful, finally finding the animal you’ve been tracking can make the journey worth it, especially when you can silently take them out in a single shot. Getting the red hit marker, signaling that you cleanly killed the target, is exhilarating and relieving, especially given how long it likely took to find the animal. Even if you don’t kill an animal on the first hit, you’ll often be able to follow its blood trail and catch up to it, assuming it couldn’t run away quickly enough. The game is clearly aiming for you to find an animal’s tracks, follow it for just long enough, and smoothly kill it, because sequences like that are the most satisfying and enjoyable in the entire experience, though they don’t happen often enough. 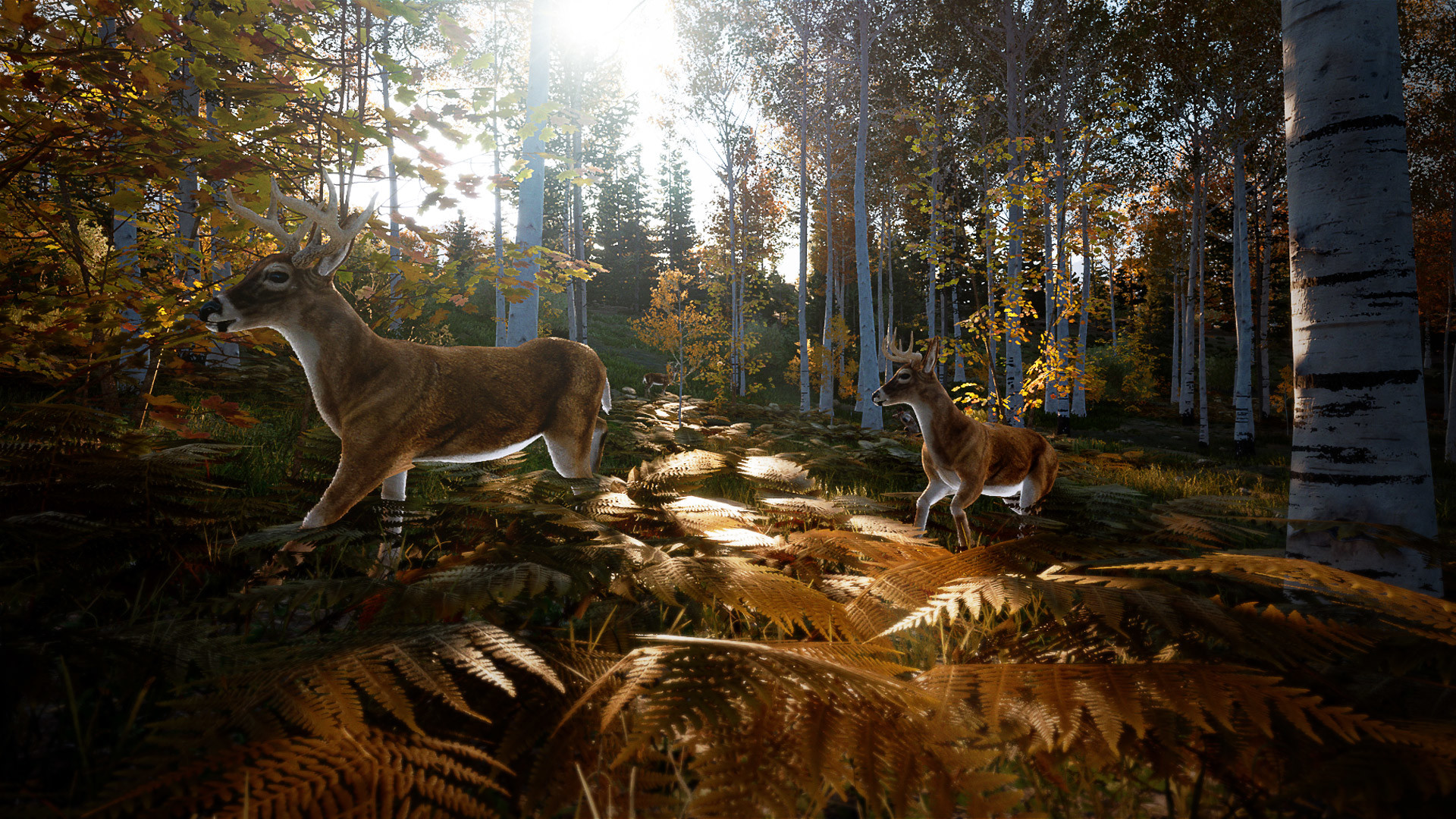 "Being rewarded for aimlessly wandering an area by being shown the exact location of nearby animals renders any traditional searching and following tracks moot."

Ultimately, the biggest problem I found with Hunting Simulator 2 is that its gameplay doesn’t make up for its lack of progression. From the outset, you’re given enough credits to buy guns of almost any caliber and licenses for any animal. It doesn’t set out a path for you to start with small and easy targets, like ducks or foxes, and organically improve to more difficult targets like bears or cougars. There’s no final goal because everything is available from the start. In this sense, it’s true to form as a simulation because you’re given the freedom to do anything you want, but the moment-to-moment gameplay is too slow and inconsistent to make up for it. The only gameplay loop is selling animals for credits to buy different guns and licenses, but because I was given enough credits to buy serviceable guns and most licenses from the start, I didn’t find the act of hunting to be consistently satisfying or substantial enough to make me want to keep playing and collect everything from the store, nor did it entice me with the potential of hunting bigger and better enemies the more I played.

Throughout my time playing Hunting Simulator 2, specific moments that stick out in my head are few and far between. The majority of my time was spent almost insubstantially, wandering around empty environments hoping for an icon to pop up or for my dog to call me over to see an old pair of tracks. When I finally came across an animal and successfully hunted it the old-fashioned way, I was ecstatic to see the fruits of my labor, but too often I was made to feel like I was wasting my time, especially because I didn’t have anything to work toward and could have gotten the same reward from running around and hoping for an animal to pop up randomly. For all of its positive instances, there are long stretches of tedium and monotony that make Hunting Simulator 2 a tough sell, even to experienced hunters.

Final Verdict:
BAD
Despite some rewarding moments coming at the end of long tracking sequences, Hunting Simulator 2’s lack of meaningful progression and long stretches of emptiness make it miss its mark.
A copy of this game was provided by Developer/Publisher/Distributor/PR Agency for review purposes. Click here to know more about our Reviews Policy.