Great games generally have similar elements in common; a unique tone, a richly detailed setting, strong writing, memorable characters, the list goes on. One of the simplest ways in which to impact many, if not all of those elements is a portion of gaming that often goes unrecognized, or even ignored: Music, and sound. 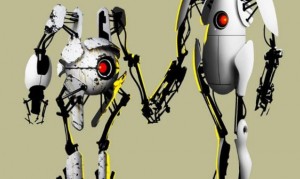 For my money, there is nothing that can instantly alter the mood, warp the setting, and otherwise create a distinct feeling for a game like music. It’s one of those elements that either works or doesn’t, but it never gets in the way. A glitch is noticeable, because it could potentially kill you, and at the very least it’s an irritation that jars you from the experience. Bad voice acting is potentially hilarious, but also ruins immersion and gets in the way (take note, Marvel Ultimate Alliance). Everything from bad level design to poorly placed hit boxes to unbalanced RPG systems are important enough to the core experience of a game that any misstep could turn a great game into a decent, but forgettable one, or a mediocre game into a bad one.

Music has no such issues. You either notice it or you don’t, and even if it’s noticeably bad, it can be turned off, or turned down. But when games get it right, when the music is interspersed with the game in just the right ways, it can turn a game toward true greatness.

The first time I noticed spectacular music was way back in 2002, when Medal of Honor: Allied Assault was one of the few World War II games on the market (remember when they were original?). Not only did it have the now flagrantly overused Normandy Invasion as one of its high points, it also had future Up composer and Academy Award winner Michael Giacchino in charge of the music. Though his soundtrack fairly straightforward, predictably piping in with its sweeping, enervated score when the bullets were thickest, the effect was tremendous. You wanted to charge up the hill when the music kicked in, and the music moved you just as much, if not more, than the level design did. It was at its best in those frenetic moments when you’re wrapped up in a firefight, completely immersed, timing grenade throws and reloads to the music, even if you didn’t realize it. One of the perks of the game was that the music was contained in separate mp3 files, and I still have some tracks kicking around on my hard drive. I give it a listen now and then.

The Elder Scrolls series has been lauded for a number of reasons, but one of the reasons I consistently return to playing Morrowind is partly because of the fantastic music and sound design. The music is a simple repeat of three or four songs intended to be playing constantly in the background, switching from simple, restrained orchestral tracks to the more adrenaline-injected numbers that come on when the player is in combat. It’s a simple enough gimmick, but there’s a charm to it that is further enhanced by the sound effects themselves. I don’t think any Morrowind veteran is going to argue that any of the sound effects are particularly realistic, but there’s a level of uniqueness to it that for some inexplicable reason has me returning again and again to the rural, empire-resistant land of Morrowind. Though I can’t quite place my finger on exactly why, there is just something about the sound and music in Morrowind that make the game stand out and, I would personally argue, stand above the more recent entry into the Elder Scrolls series, Oblivion. 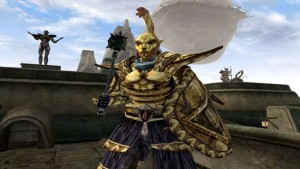 don't be fooled; that maraca is actually a mace

Half-Life 2, similarly, has nothing much to add to the music portion of gaming (unless you count Portal as part of the Half-Life canon, in which case “Still Alive” delivers in spades), but it certainly has something going for it in the sound department. From the very beginning, after you step off the train in City 17, the Civil Protection forces, with their uncanny-valley face masks and voice-altering helmets policing a debris-strewn nearly empty city, create a palpable atmosphere from minute one in the game. It only gets better as when CP units are gunned down after getting some weapons, each one letting out a two-toned flatline sound in the company of bullets, explosions, or superheated railroad ties fired with a distinct, flat thump (and even more satisfying metallic thunk when the weapon hit against a brick wall with a Combine corpse decorating the end) when fired from the crossbow. Valve’s Source engine was also one of the first in the industry to fully utilize a 3D sound system, which made the throaty boom of an explosion echo off canyon walls, and the lamentable death-scream of a tripod walker ripple out in a city street. From a distance, the effects were changed enough to really make you think that there was a full-on city uprising surrounding you in the later levels.Half-Life 2’s sound perfectly illustrates how exceedingly simple techniques can serve to deeply immerse a player into the world. 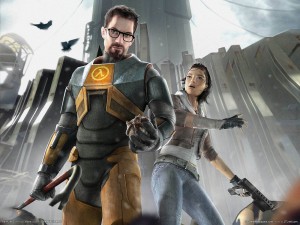 Bioshock took a different, and dare I say, even more immersive approach. Throughout the course of the game, the city of Rapture is as much a character as any of the human or post-human people you encounter in the course of playing. With leaky hallways and the distant groan of Big Daddies, to the mumbling of deranged splicers, every new environment bombards the player with sound, tacitly telling the story of Rapture’s fall. Some of the best moments come when the player enters a room with a scratchy, 60s-era record wobbling around on its player, the voices of bygone singers perfectly underscoring the dying city. The music wafts in from around corners or muffled by doors as a way of injecting a juxtaposition of normalcy for the player. While audibly, the music plays as if to suggest a time before Rapture’s freefall, visually, the player is still stuck in a flooding city with murderous lunatics around every corner. The fact that there is little in the way of normal orchestral scoring, or even a soundtrack worthy of the name, is a perfect illustration of how rich and complex the storytelling in a game can be, with every sensory element lending itself to the crafting of a tale.

Understandably, in my zest to jot down a few of my favorite achievements in music and sound, I invariably missed a few of the great ones. Tell me how egregious my omissions are in the comments.