When I initially played the prototype of Indivisible way back in 2015, I knew it was going to be something special. Four years later, I can finally confirm that Indivisible beautifully marries turn-based RPG combat with Metroidvania exploration and platforming to create a game that defies traditional genres to become something wholly unique. And though a handful of minor missteps along the way bring things down a bit, there’s no denying that Indivisible is guaranteed to join the ranks of independent gaming success stories.

Indivisible casts players as an audacious young girl named Ajna who sees every obstacles as a solution best solved with a few swift punches. Her journey begins with a familiar opening that sees the destruction of a village and death of her father, and upon learning about the evil warlord responsible, our young hero eagerly sets out on a journey to defeat him. The story eventually expands into the cliche “ancient evil” plot we’ve all come to know and love in JRPGs, but smart writing and story sequences that don’t overstay their welcome help keep Indivisible from becoming a bore. 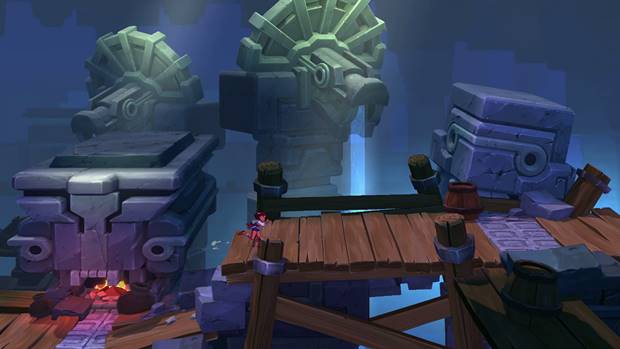 Ajna is joined by an ever-expanding cast of likable characters along the way, all of whom she absorbs into her mind with a newly-awakened power that allows her to trap them inside and subsequently use them for combat. I was always excited to meet and recruit the many quirky tag-a-longs since the writing itself typically made good use of them through funny and colorful dialogue. It’s just a shame that developer Lab Zero Games made some poor casting choices for the voice work – some characters (Ajna included) gain and drop accents throughout the game, and the overall quality of the voice acting ranges from emotionless to cringe-inducing. Because of this, I usually opted to just read the conversations and skip over the sometimes grating voices.

The combat in Indivisible may remind genre fans of the beloved Valkyrie Profile series, adopting a similar battle layout that maps each of your playable characters’ attacks and blocks to one of the four face buttons. There’s a high learning curve involved if you want to get the most out of the combat mechanics, and the game’s tutorials don’t do the greatest job of properly explaining everything, leaving you to test things out with some trial and error. This can be frustrating when you’re thrown into earlier fights with so many inputs to remember in a short window of time. Considering the fact that each of the over 20 playable characters possess a collection of additional direction-based moves, Indivisible quickly turns into a game of rapid button combo memorization that takes time to get used to but eventually feels rewarding to master.

Frantically pressing all of the face buttons to get everyone to use a normal attack is easy enough, but trying to juggle multiple characters’ directional inputs to set up combos while also consistently blocking on time can be tricky. You can opt to use L1 to have your entire party block and take out some of the micromanagement of using face buttons to have an individual character shield themselves, but this can drain your special attack meter. This system of tradeoffs makes Indivisible feel fair and balanced for both casual button mashers and more experienced gamers who may be seeking to get the most out of each encounter. 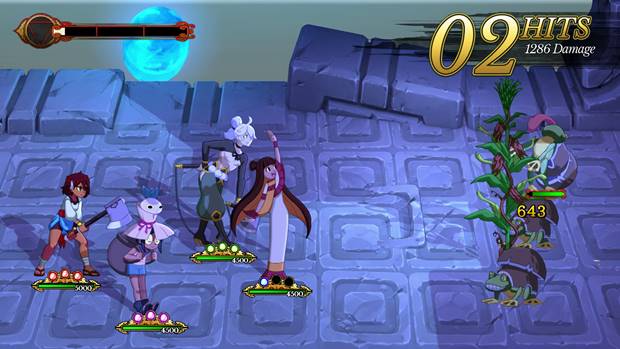 To make fights even easier, you can fill up a special meter and use R1 to unleash special moves that range from a flurry of attacks to helpful party-wide healing spells depending on which character you choose for it. Additionally, holding the trigger allows you to slow combat down drastically to give you ample time to form strategies or just glance over your characters’ health and attack stores. If you find that the game moves a little quickly for you in general, save points are plentifully scattered around the levels to make the occasional defeat feel less disappointing.

When you’re not whaling away on Indivisible’s enemies, you’ll be platforming through its gorgeous 2D world full of captivating locales and charismatic characters, and it’s all brought to life with meticulously hand-drawn animation that just begs to be admired. In a time where so many RPGs have moved towards realism, Indivisible embraces the visual style of a bygone era while bringing the fidelity up to modern standards – from its expressive character models to its lush, vivid backdrops, there’s an attention to detail here that has to be seen to be believed.

You’ll spend most of your time with the game exploring these resplendent environments, and how much you enjoy them depends entirely on your patience with Metroidvania games in general. As one would expect, there’s copious amounts of backtracking required as you find new items to open pathways you passed earlier in the game. And despite the best of efforts of the map, there’s always the chance you’ll get turned around a bit as you try to navigate to and from the various areas. That said, while backtracking through the same spots over and over can get tiresome, I appreciated that the items found throughout your journey serve multiple purposes and therefore usually grant fun new gameplay elements to use.

This multi-purpose item system was apparent early on when I found an axe that allowed me to cut through wooden blockades and scale tall walls. This opened up access to new areas in two totally unique ways, getting a lot more utility out of a single item and giving me a more substantial feeling of progression. Throughout the 25 hour journey, these types of helpful items lend much-needed freshness to the otherwise standard navigation elements of Indivisible. Genre typical movements like wall jumping and air dashing can be cool, but pole vaulting with a spear is cooler. 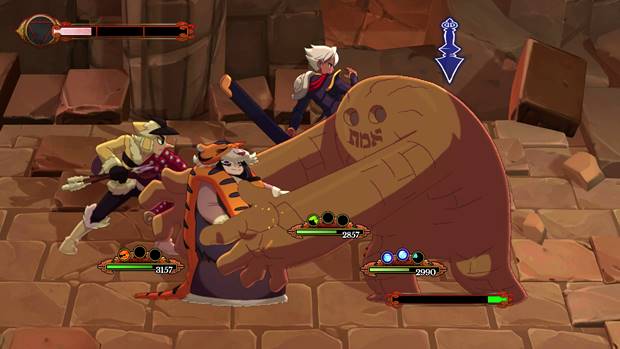 But as fun as it might be to string together all of these unique moves and items, navigating the treacherous levels can also sometimes feel cumbersome when Indivisible decides it just doesn’t want to work with you. From time to time the game wouldn’t register my inputs, and I periodically ran across irritating bugs that had me falling through the map or getting stuck in the game’s environments. These were rare occasions, but they still forced me to restart and lose progress, and I’m hopeful to see them ironed out with future updates.

Despite its faults, Indivisible is a one-of-a-kind game. I would’ve loved to see some better voice work and a bit less backtracking, but mastering the initially chaotic combat and finding new navigational items was a rewarding experience and well worth the time spent exploring the game’s utterly stunning world. It’s a fascinating experiment to behold, and if you’re willing to overlook its flaws, you may find that this genre-bender rewards you with a bounty of engaging gameplay.

Final Verdict:
GREAT
It’s obvious from its opening moments that Indivisible has a lot of loved poured into it, boasting gorgeous visuals and interesting characters sure to win over your heart. It isn’t a perfect example of either of the two genres it blends together, but it does plenty with each of them to make for an exciting adventure.
A copy of this game was provided by Developer/Publisher/Distributor/PR Agency for review purposes. Click here to know more about our Reviews Policy.