Posted By Jordan Garland | On 21st, May. 2012 Under Previews | Follow This Author @MostUnfurrowed 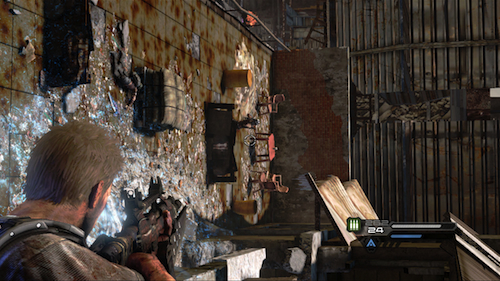 It’s quite remarkable to think that it was only when Sir Isaac Newton observed an apple plummeting to earth that the concept of gravity was established. Nowadays, it’s very much a given and we’re not expecting to find ourselves hurtling into outer space any time soon. Well, that was until we played Inversion, Saber Interactive’s latest addition to their reckless disregard for the laws of thermodynamics.

In Inversion you assume the role of one Davis Russel, a hot-headed police officer who spends about half the game showing pictures of his daughter to complete strangers, like the most boring man in the office. Assisting him are the gruff overtones of Leo Delgado, a man made entirely of gravel. It’s just another day in Unspecified American City, Probably New York and all hell breaks loose when a mysterious horde of aliens named the Lutodores, essentially Chaos Space Marines on shore leave, get bored and start to shoot everyone in sight.

Dialogue is certainly not one Inversion’s strong suits, the opening monologue manages an unparalleled degree of cliché-laden pretentiousness, a flavourless macaroon committing the cardinal sin of naming itself in the opening dialogue. Other such gems include ‘We can use use!’ upon discovering some guns and when confronted with gun-toting hostiles, a timeless utterance of ‘I think they’ll shoot if we move.’ Whilst Inversion clearly isn’t trying to win any awards with the dialogue, some of the facial animation and gestures are pretty well done, successfully make our friends Davis and Leo seem a little more real. 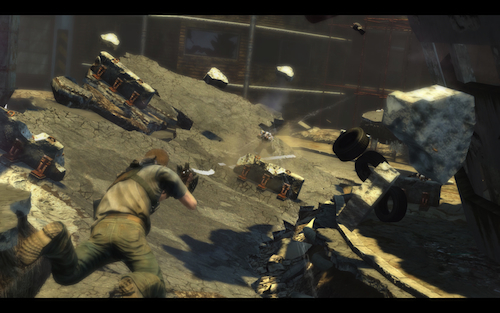 Another issue which seems to plague the single-player portion of Inversion are some truly bizarre level design. In one segment, I frequently found myself wandering aimlessly through some underground caverns, with little guidance as to where or indeed what I was supposed to be doing, endlessly traipsing up and down until my good friend trial-and-error allowing me to continue. Increasingly frustrated with the environment, I also found a similar issue was the gravity gun and whilst fun to use, often found myself shooting it at meaningless bits of rock and earth in an attempt to get it to do something, with nary a hint or instruction as to what I should’ve been aiming at.

Inversion manages to look both quite impressive and underwhelming at the same time. Some environments are littered with uninspired textures and the entire game seemed to suffer from jagged-edges syndrome. Conversely, most of the multiplayer maps look pretty good, it’s just a shame the game seems so inconsistent.

Gravity mechanics are the unique selling point, this basis and the saving grace of Inversion. The gravlink, a gravity-gun, can pin your foes to the ground like Yokozuna or helplessly suspending them in mid-air, proving infinitely useful when faced with a marauding gaggle of Lutodores. Even better still are some of environments, with gravity occasionally switching or inexplicably changing planes, it makes for a welcome level of unpredictability in gameplay. A particular highlight, in both the single and multiplayer, is where gravity briefly ceases to apply, creating the quite serene experience of floating between chunks of rubble without a care in the world. 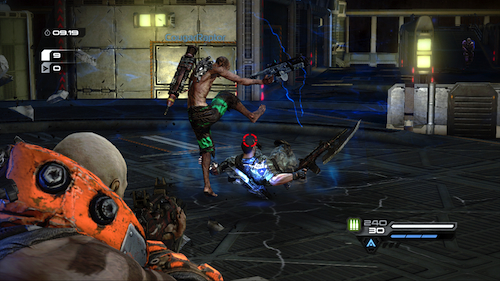 I get the feeling that the focus of the game is the multiplayer, the four maps I played on seem to have more craft and care into them than the single-player campaign thus far. Hourglass is capture the flag with an twist; once a base is captured, the map flips upside down, providing an entirely new perspective for gameplay, as well causing some momentary disorientation. King of Gravity sees only a single participant with a gravlink, with everyone else baying for their blood, allowing for some rather satisfying multi-kills.

Whilst we’re saving our judgement for the full game, at the moment Inversion seems to be a game of mixed fortunes. Some awful dialogue and single-player design choices are cancelled out by the fun, perspective-warping nature of the multiplayer and feels like it might be substantial enough to warrant a purchase, only time will tell.

Inversion is published by Namco Bandai, developed by Saber Interactive and is released on 8 June in Europe and 5 June on Playstation 3, Xbox 360 and PC.

This game was previewed on the Xbox 360.