Since the dawn of console gaming, there have been football games. Being one of the most popular sports in America, it doesn’t come as a surprise how many football games exist. Over the course of decades the football video game has been created over and over again, perfection coming ever closer with each distillation. What we have seen in the results is the success of two styles of football games, the hyper-realistic Madden style, and the over the top arcade Blitz style.

Judging by the title and the games presentation, Backbreaker appears to be a game that will have over the top tackles, people running around on fire, and fireworks going off as receptions are made. Instead we have a realistic attempt at an over the top gameplay style.

Confused? So I am.

The first thing you will notice when you play Backbreaker is the camera. Backbreaker uses a close 3rd person camera to try and simulate the feeling of being on the field. The only problem with this is that the camera is not realistic to what it is like to be on the field, and because it is locked 3rd person, makes just running around quite tricky. In real life, even with a helmet and face mask, you still have about 160 degrees of vision, no TV can emulate your peripheral vision, and because of that a more wide angle camera is always a better compromise. The problem with the fixed 3rd person is that when you try to do a simple loop around another player, the camera shifts completely.

So for example, in real life, if you were running to a person who was in front of you, but there was an obstacle in the way, you would loop around the obstacle, but keep your head facing your target. In Backbreaker, your neck cannot move. So as you run around that obstacle, you are now looking into the stands, and have no idea if the thing you are running towards has moved.

So does a fixed 3rd person camera seem more realistic, no. And not to mention, this already troublesome camera proves to be nearly impossible to handle when you are switching players. Because you are so close to the action, and everything is so hectic, when you switch players, you have absolutely no idea who, or where you are. It’s not like in most football games where a birds eye camera just moves over to another player, keeping a similar perspective of the field. Instead, its like you are swapping positions with another person.

Example number 2, imagine if you were standing in a room with 21 other people, all mingling around doing different things, and you suddenly swapped places with a random person. You are completely discombobulated for a few seconds, and in that time the play is already over.

I actually found that if I missed a tackle as my “primary” player, that it was more effective to just let my AI do the rest on their own.

The game also boasts for its realistic physics engine that makes every tackle unique. This would be very interesting if this game actually had Backbreaking tackles. I’m sure that every once and a while you will score a good hit that will send someone flying, but most of the time you just watch two rag dolls tumble to the ground on top of each other. Not very exciting. Also, given how mundane most of the tackles are, I really don’t see the need for a replay video to come up after every hit. 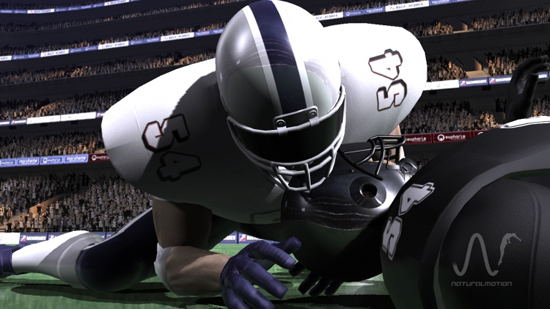 You literally have to watch skip a replay after every down.

The game does take a unique approach on how you control your player. The right stick functions similar to the right stick in the Skate series, meaning that specific flicks, half and quarters circles will make your player perform their actions. In addition to this there is the right triggers “Aggressive” Mode, in which your player can perform more aggressive as opposed to evasive maneuvers. There is also focus mode (left trigger), which helps the QB focus in on his receivers while passing.

This mechanic is interesting, but at the same doesn’t doesn’t pack enough punch to really hook you in and make you want to keep playing.

Although, the two most interest peeking aspects of this game are Tackle Alley, and create a team.

Because the Madden Franchise has bought out the licenses for the official NFL rosters, competing games have been forced into creating fake teams and players for their Football universes. If you are the type of player who is looking for this kind of customization, Backbreaker promises a “powerful” logo editor, uniform editor, custom player and team names, with the added bonus of being able to bring these custom teams online.

I cannot vouch for how “powerful these editors will be, but unless you are hardcore into customization, this is probably something you are just going to fool around with once or twice. 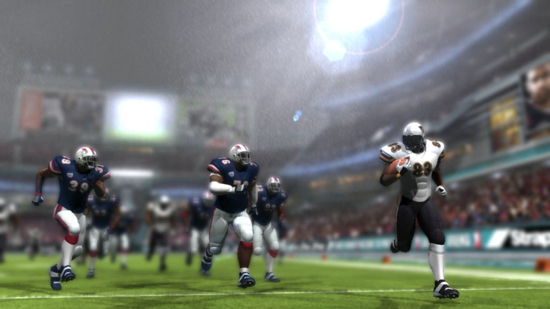 The Tackle Alley is a mini game where you start off holding the ball, and you try to run down the field and evade defenders. Each time you get by, you are respawned on a more difficult wave, which changes the number of defenders, where they spawn on the field, and how they act towards you. The game promises 100 waves of Tackle Alley. This mode will definitely serve as a great time killer when you aren’t in the mood to play regulation matches.

Aside from flashy music and visual style, Backbreaker offers nothing groundbreaking to the football genre. Most hardcore fans are going to stick with Madden, and I feel this is because football games are more about being the commander of a team. Football as a sport is played more through choosing the right plays, subbing in and out players, and controlling draft picks. Backbreaker attempts to go for the more personal experience, stressing the control of the actual players on the field.

Backbreaker hits the stores June 1st, and I can say I would be glad to see it compete well against the tyrant Madden series.