The long dormant franchise makes its return. But should you welcome it with open arms?

Jagged Alliance is a franchise with some renown behind it. Though long past its heyday, it was once one of the premier tactical turn-based titles back in the days of MS-DOS and early Windows. Jagged Alliance: Rage! is a tactical game where you control a team of mercs and infiltrate an island to save a fellow mercenary, taking out the island’s dictator along the way. This game is set 20 years after the events of the first title in the series and the mercenaries are all returning characters that long-time fans will recognize. But does this capture the spirit of the original? And more importantly, should Jagged Alliance be brought back?

First impressions with the game aren’t stellar. The presentation in this title is, for lack of a better term, lacking. The story isn’t exactly compelling with its “crazy dictator in charge of an island” premise and the writing is also pretty bland. My merc team was comprised of Dr. Q, who spouted wise Chinese proverbs every five minutes, and Vicki, a Jamaican woman. It’s fun in a campy way but it’s hard to take seriously. Graphics are pleasant enough, though animations can be somewhat choppy at times. Environments looks nice from a distance but the lack of graphical quality is pretty apparent the closer you zoom into gameplay. Ultimately though, even though it doesn’t push any boundaries, what’s here is good enough.

But after all that’s said and done, Jagged Alliance: Rage! is still a tactical game and it is a fun time when everything works the way it’s supposed to. Like I mentioned before, you select a team of two mercenaries to explore the island with. These mercs all specialize in different aspects like sniping, stealth, equipment maintenance, etc. However, they also come with their own setbacks that they’ve acquired over their years of inactivity. Reduced eyesight, claustrophobia, these are all traits that will affect your gameplay through your time on the island. You’ll pick up all of your equipment out in the field and will also have to deal with a few light survival elements like dehydration and infection. The game does a solid job of presenting all of these elements in an accessible way so as not to overwhelm the player. 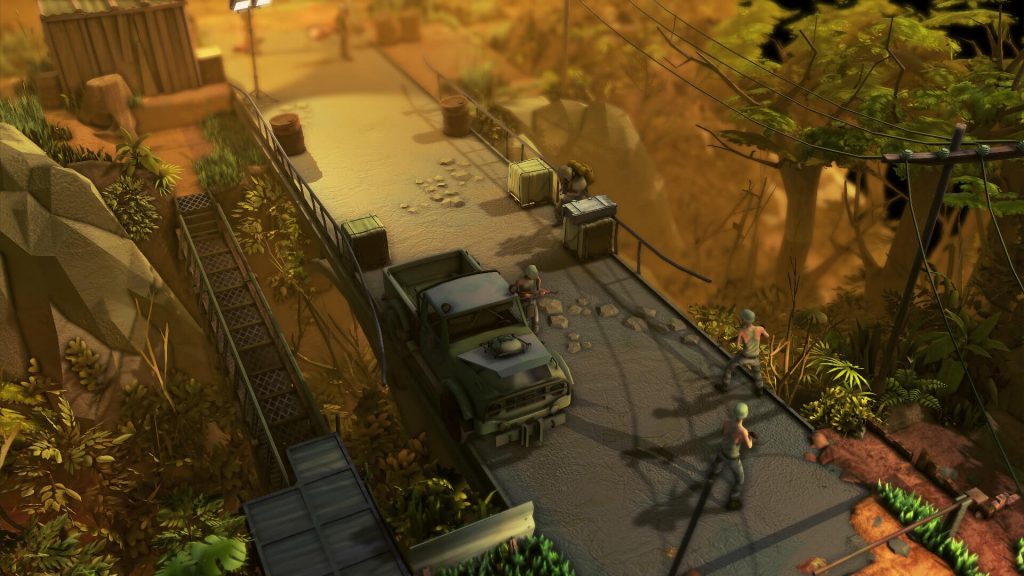 "Graphics are pleasant enough, though animations can be somewhat choppy at times."

Stealthing around in this game is a lot of fun. You’re given plenty of movement options and it feels great to use them and to outwit your opponents. You can whistle and draw your foes away before you gut them from behind. Finding and stealing equipment during missions is also a lot of fun. This opens up a lot of interesting choices on the fly. Do you keep your busted-up rifle that you modified earlier but needs repair or do you swap it for a relatively pristine yet weaker version that an enemy dropped? Trying to make it out of a mission with some good loot that you’ve picked up adds a compelling tension to the gameplay.

During your turns, you perform actions that use up your action points. You have full control over how your character moves about, from running to sneaking to crawling, with all options having their benefits and setbacks. Gunplay also has a unique twist brought over from the older titles: the ability to aim more accurately. At the cost of additional action points, you can hone your aiming down and improve your percentage chance of hitting any specific part of the body you’re aiming at. This is a great gameplay option and it does a lot to add depth to the simple act of shooting.

What doesn’t add much depth to the gameplay is the addition of survival elements. Though some things make sense, like equipment and health management, the addition of sickness and thirst just creates busy-work for the player. Instead of enjoying your tactical gameplay, you have to constantly be on the lookout from bottles of water scattered around the levels lest your merc start dehydrating and not performing as well. All this creates an additional meter management mechanic, and it happens far too often. This ends up turning into a cycle of wiping a level of enemies before spending the next five minutes searching through every nook and cranny for things to drink before you leave. It’s not difficult, it just serves to add more tedium to your experience. 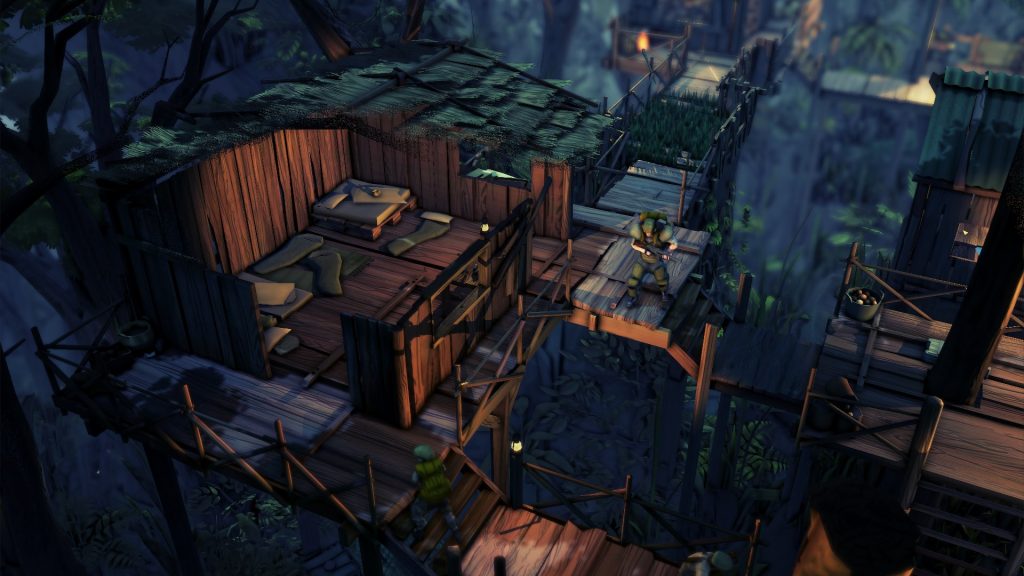 "The AI in Jagged Alliance: Rage is a strange beast to wrap your head around."

There are also issues that stem directly from that fun gameplay loop. While it’s satisfying to sneak around camps, enemy AI is erratic and their line of sight is never clearly defined. Getting spotted from the other side of the map halfway through a mission is never fun when you feel like it wasn’t your fault that you were caught. Both you and the enemies can also shoot right through environmental objects like buildings or cars in order to hit targets hidden behind them. And I don’t mean shoot through them as in putting holes in the walls of buildings or denting the sides of cars. I mean the shots end up phasing through the object like it wasn’t even there.

The AI in Jagged Alliance: Rage is a strange beast to wrap your head around. The enemies are either brain-dead who don’t react to their comrade dropping right next to them or they’re gun-toting bloodhounds who can sniff you out from the other side of the map. And although you can take out an alerted enemy before he can sound an alarm, most of them just shout out to the others around them as soon as they figure out where you are anyway. They don’t exactly seem like well-crafted enemies that provide a challenge, but more like a malfunctioning CPU that just decides to read your inputs at certain moments. 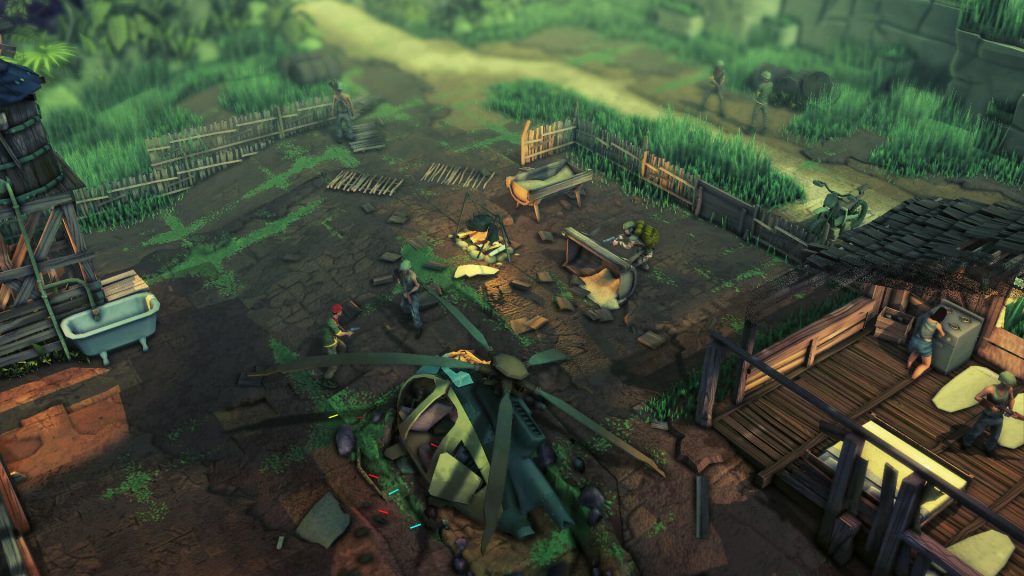 "This is a game that could have benefited greatly from another year or so in development."

And even though those all drag the experience down, the biggest issue Jagged Alliance: Rage! has is in its control. Inventory management is a source of great annoyance since you’re only allowed a certain amount of slots to carry items and the stacking limit is hilariously low, if it’s allowed at all in the case of certain items. Trying to take loot from fallen enemies turns into a cumbersome back-and-forth where you end up giving your dead foe a handful of your items temporarily just so you can get an item and use it. Moving around the map also isn’t ideal. Your cursor oftentimes doesn’t match up with where you’re pointing due to the deceptive camera angle. And orienting the camera into a top-down view gives the game an ugly green filter over everything so that’s not ideal either. On top of all that, there’s slowdown and delays to your cursor, which makes the essential act of moving around a chore.

This is a game that could have benefited greatly from another year or so in development. What is here is fun but it’s brought down by technical issues and strange gameplay elements. While the moments where you successfully take out an entire camp from the shadows stands out as a highlight, you have to slog through so much to get to that point that it hardly seems worth it. Hopefully this title gets patched down the road but as it is, this is not the entry that’s going to get the world wishing for more Jagged Alliance.

Final Verdict:
AVERAGE
Although there’s fun to be had, Jagged Alliance: Rage has many small issues that bring the entire experience down.
A copy of this game was provided by Developer/Publisher/Distributor/PR Agency for review purposes. Click here to know more about our Reviews Policy.