Posted By George Reith | On 20th, Dec. 2011 Under Reviews | Follow This Author @GNReith

Trailers are getting better these days. Too many times recently have I seen an amazing trailer that is followed by a sense of disappointment in the product it is meant to represent. I’m used to this happening by now, but it still blind sided me when the exact same thing happened with the intro movie to James Noir’s Hollywood Crimes 3D on 3DS. An awesome opening FMV showed a gritty voice over discussing the grimy underbelly of Hollywood in true noire fashion. Did I get such a gritty and dark experience in Hollywood Crimes? Not quite. That’s not to say I was entirely disheartened by the game but, in spite of some great ambition, Hollywood Crimes has one too many quirks to properly realise its aspirations. 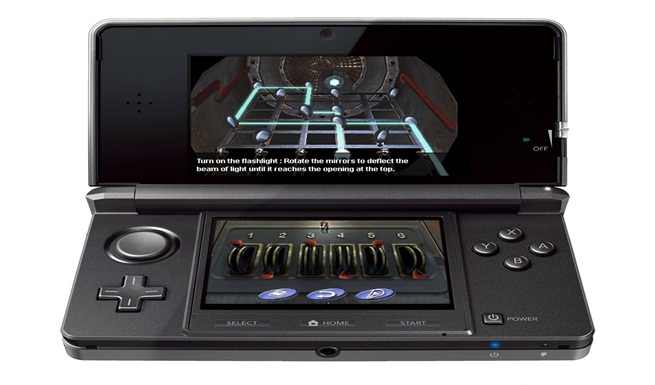 The puzzles are all well thought out, negating the usual frustration I associate with this sort of game

The game begins with you entering an audition for The Amazing Puzzle Masters, an unsubtly named Hollywood quiz show. The game immediately goes painfully out of its way to convey the vibe of its 60s Hollywood setting, right up to the point where I’m getting called “honey” by some overtly feminist TV producer in a kitschy manner. After getting accepted onto the show, an old friend turned FBI agent contacts you about a series of murders that he’s investigating. Turns out he needs your help because you’re apparently that good at solving puzzles. Whilst the prologue is a bit ridiculous, it did usher in one of the more pleasing aspects of Hollywood Crimes: Its effective use of the 3DS hardware. The prologue sees you getting your picture taken for promo purposes for the show, an act that is recreated in real life by the 3DS’ front camera. This picture is then used in any pictorial representations of your character, which is a cool way to increase the immersion.

The plot is one of the main things that kept me going in Hollywood Crimes and, though it is often a bit hard to swallow, there are some intriguing plot twists thrown up later on. When you’re actually taking on rounds of the game show though, things slow down dramatically. It’s a shame really as, the moment you break out of these bits and into the investigations, things get a lot more interesting. We see a similar dip occur on account of some truly terrible dialogue. It generally holds up a decent standard throughout, but there are far too many lines that left me grimacing. 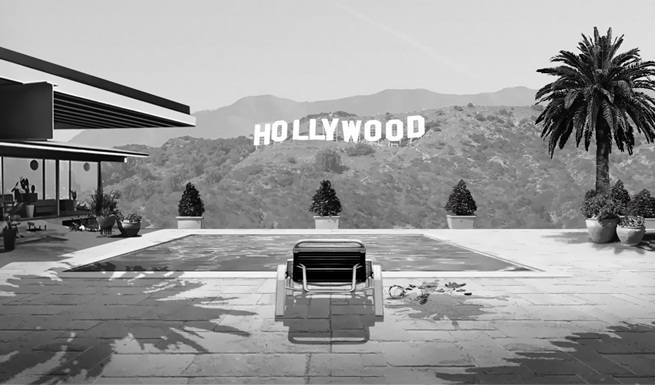 All gameplay takes the form of various puzzles you need to solve. Imagine Professor Layton without any of the walking around and investigating and you’ll have the gist of it. Riddles are solved using the touch screen and often revolve around number or spacial awareness puzzles. They’re all well constructed and fit into a structure that means you can’t actually fail them as such. Whilst many puzzle masochists out there might see this as a failing, it actually gives the game a more relaxing edge. It certainly gets rid of the random and frustrating guessing I wound up doing in some of the cheaper riddles of the Professor Layton series. The problem with the gameplay then is in the pacing. When the plot is following the quiz show rounds, you just solve puzzle after puzzle without any plot exposition or other elements to break the monotony. This is made even worse when several puzzles begin to get repeated. They obviously return in a more difficult form with a separate solution, but the general format is often identical. It all leads to an uneven experience, with far too many moments that felt too much like hard work.

The presentation of Hollywood Crimes is another element that frustrates, mainly in that it is so close to being great. There is no doubt that it’s ambitious. Full motion video and voice acting is used to give life to the game’s characters but, whilst it’s a highly impressive attempt at a high production value aesthetic, it falls flat on some fundamental levels. The main issue is with the lip-synch. Only a handful of frames seem to be used to animate each characters’ face, leading to an uncanny flapping of the lips any time that dialogue ensues. It just looks wrong and, whilst it adds to some of the game’s creepy elements at times, it is often just out of place. The voice acting too is impressively thorough for a hand-held title, though they aren’t exactly voice overs of the highest quality. One of the things that Hollywood Crimes 3D really nails though is the use of the 3D effect. Now that the 3D capabilities of the 3DS aren’t quite so steeped in novelty, developers are starting to realise that less is more when it comes to stereoscopic 3D. The 3D imaging on Hollywood Crimes is thus pleasantly subtle, giving just that extra hint of depth to some of the 3D block puzzles that the game throws your way. 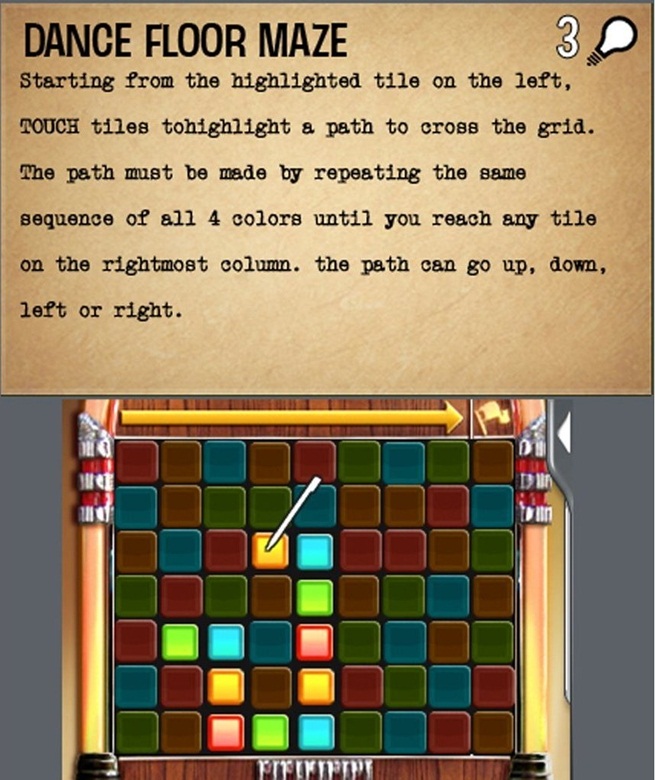 I hope you like the look of this puzzle, because you’ll be seeing it a lot

Hollywood Crimes 3D is an odd game in that, though it uses a very safe and conservative genre that is proving very popular with hand-held gaming markets at the moment, it handles itself with the utmost experimentation and ambition. The ambition is sadly flawed but, though I find it difficult to recommend over other similar titles, I have come away from my time with Hollywood Crimes revering it with an odd level of respect. If you can stomach an experience that manages to offer a few impressive moments interspersed with other elements of mediocrity, then Hollywood Crimes 3D may be worth a go. Its short length and inconsistency make it tough to recommend at full RRP but, if you find a copy on the cheap, its moments of excitement make it an experience that could be worthwhile.

An attempt at a Professor Layton style puzzle game with a gritty noire style, Hollywood Crimes is a highly ambitious title that doesn't quite hit the mark

A copy of this game was provided by developer/publisher for review purposes. Click here to know more about our Reviews Policy.
Tagged With: 3DS, James Noir’s Hollywood Crimes, Ubisoft