Jetpack Joyride was released about a year back for all iOS and Android devices. Developed by the studio made famous by the ridiculously addictive Fruit Ninja, Halfbrick, Jetpack Joyride was, obviously, an assured success. And it was a success. For good reason. It was fun in short bursts, it was enjoyable, it was replayable- it was exactly the kind of pick up and play, on the go experience arcade gamers love.

And now, a year later, it’s been released for the PS3, PSP and PS Vita via the PS Minis program. Is it good? Of course it is. It hasn’t changed one bit. But does it make sense? Not really. Does it have flaws? Yes, yes it does.

But let’s talk about what the game is exactly about first- you play Jetpack Joyride using just one button. The X button. You use it to power your machine gun powered jetpacks and hover above obstacles and lazers and enemies, and shoot them with your machine gun jetpack’s bullets as you go over them. It’s a simple enough concept, as it should be, but mastering it takes time, since the game speeds up as you move forward, to the point it becomes breakneck and you eventually, inevitably die.

It’s gratifying and fun, and maneuvering around the arenas and trying to make high scores and then consequently beat them is highly enjoyable, and due to this simple yet fun nature of the game, you can easily come back to it again and again. The extra objectives that the game gives you the option to tackle while playing- like hovering a specific amount of meters of collecting a specific number of coins- makes it even more fun.

But there’s an issue- there are no leaderboards. Sure, creating high scores and beating them is fun, and having no leaderboards isn’t an issue as long as you’re playing it on the same device with friends, but it takes away a lot of competitive edge and the game loses some replay value, thanks to this. Leaderboards seem like a logical and basic feature that a game such as Jetpack Joyride should have, and their omission is baffling.

There’s also the fact that the game is priced at $3.99. You could buy this game for free on your Android and iOS devices, and the visuals don’t appear as stretched on them as they do here (not that they matter in such a game), but here, you have to pay for what is arguably an inferior version. 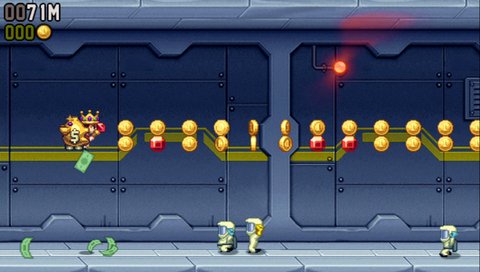 And why exactly would you pay for a game that you can play for free on your mobile phone or your iPod? It makes no sense.

So yes, Jetpack Joyride on the PlayStation systems has a few issues, and I wouldn’t recommend buying it if you have an iOS or Android device. But it’s still an enjoyable experience that you can keep coming back to.

Not worth the price; No leaderboards; Why play it on a PSP/Vita when you can play it on your phone?

Final Verdict:
FAIR
It's pointless to pay for a game that you can play on your phone for free, but that doesn't stop it from being an enjoyable game.
A copy of this game was provided by Developer/Publisher/Distributor/PR Agency for review purposes. Click here to know more about our Reviews Policy.