Posted By Jordan Garland | On 10th, Aug. 2012 Under Reviews | Follow This Author @MostUnfurrowed

To me, the idea of marrying Kinect and dancing sounds to me like Fred and Rose West meeting for the first time, nobody is going to look back on fondly. I’ve nothing personally wrong with dancing as a hobby, past-time or even a sport, but ask me to dance and you’ll be met with a face of total indignation. Naturally I’m not what one would see as prime candidate for reviewing as game of this nature but as it’s been out for so ruddy long, this one will be from the perspective of the friend, your friend, who’s been forced into begrudgingly playing due to the horrible weight of pier-pressure on their tiny head. 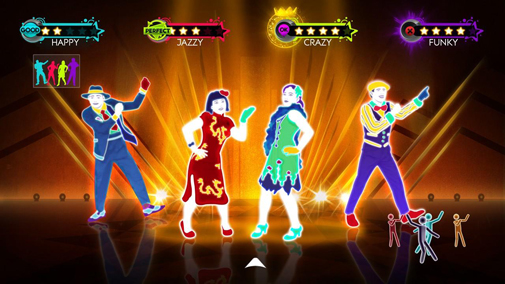 Sleekly packaged and presented, Just Dance 3 is the personification of pop music today. It’s gaudy, it’s bright, it’s not to my liking at all but there’s a a sort retro charm to it that epitomises our semi-ironic adoration of The 80’s and NME’s failed campaign to get the ‘nu-rave’ recognised as a genre.

From the outset, Just Dance 3 has an expansive and borderline formidable repertoire, featuring everything from crowd-pleasers like the hideous Party Rock Anthem by LMFAO to the smooth stylings of the Sugarhill Gang and Apache (Jump On It).

I started as I meant to continue, by accidentally choosing the two-player version of Nicole Kidman and Robbie Williams’ rendition of Sideshow Bob’s classic Somethin’ Stupid, which inexplicably features a Mermaid dancing with a Rosie from Bioshock in a hideous display of neon Primark steampunk. 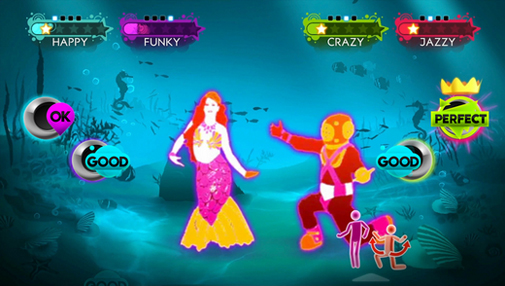 Up next was She’s Got Me Dancing, familiar to me from hours of a sodding about in the FIFA 11 arena. The first thing that strikes me is how Just Dance 3 uses a mirroring system, wherein the player is supposed to imitate the moves of the ‘dancer’ just like, well, in a mirror. Whilst apparently simple on the face of it, it can prove surprisingly complicated and bewildering, especially when twists and turns are thrown into the mix.

Whilst perhaps down to my unco-ordinated husk of a body, the dancers present further problems. Unlike in, say, Guitar Hero, the focus isn’t on the gameplay itself but on the visuals, often leaving the player fixated on the dancer/s rather than their cues. In Guitar Hero you simply ignore the background visuals, presumably only there to mildly entertaining anybody watching you ‘rock out’, and focus on the notes, having clear indication of precisely what’s up next. The same applies to most rhythm-based games simply because it’s best from a gameplay perspective.

The nature of dancing itself also serves as an issue, dance-mats were an excellent means of distilling down a huge activity into four buttons, allowing for ease of access and simplicity to everybody. In being a game that throws this concept out of the window, this means an almost immeasurable number of dance moves go into the game, meaning you simply cannot jump-in and play. I wouldn’t go so far as to say that Just Dance 3 is a ‘dancers’ game, but it’s less than forgiving to debutants. 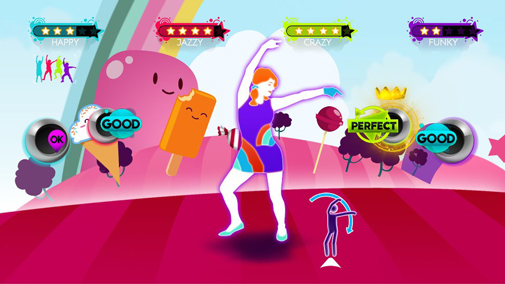 In not knowing what comes up next, a certain amount of learning is involved but Just Dance 3 never seems in the mood to teach you. There’s no tutorial mode to speak of, or even a Career mode to slowly ease you into the glitzy and cocaine-splattered road of back-up dancing. Even in the modes that do exist, I’m never entirely sure how or what criteria my moves are being judged upon; easy mode only assesses your top half, but there’s little indication as to wether I’ve ‘hit’ a particular move, other than a small box in the opposite corner. Again, with the likes of Guitar Hero and dance-mat games, feedback is a vital part of the gameplay and mistakes are duly noted and thrown back in your face.

The soundtrack is difficult to fault and some tracks click fantastically, ticking all the necessary variety-within-reason boxes but Just Dance 3 never seems to evolve beyond a simple ‘party game’. For a party game, specifically a party where everybody likes dancing and the idea of direct competition, Just Dance 3 fits the bill perfectly. It’s slick, modern and will appeal to most, but in being so expansive in gameplay doesn’t work in the game’s favour. Dance enthusiasts will more than likely enjoy Just Dance 3 but as a game it lacks depth, refinement and may only be wheeled out in a desperate attempt to revive an ailing party.

The soundtrack is difficult to fault and some tracks click fantastically, ticking all the necessary variety-within-reason boxes but Just Dance 3 never seems to evolve beyond a simple 'party game'.

A copy of this game was provided by developer/publisher for review purposes. Click here to know more about our Reviews Policy.
Tagged With: Just Dance 3, Ubisoft, ubisoft paris, xbox 360