Posted By Rashid Sayed | On 09th, Jan. 2010 Under Reviews | Follow This Author @GamingBoltTweet

Over the past few years, zombie games have turned into the World War II genre of games . . . in short, please stop. However there are some diamonds in the rough. The Left 4 Dead series has been a high watermark for the zombie genre and now there is another one. Killing Floor is made by Tripwire Interactive, LLC a small developer from Roswell, Georgia who was responsible for making PC multiplayer first person shooter Red Orchestra, is now responsible for another great zombie game. While Killing Floor might not have the production values of a Left 4 Dead game, it makes up for it in fun and chaos.

In the story department, Killing Floor isn’t exactly deep. The zombies you are facing aren’t actually zombies at all but specimens. The game takes place in England where a biotech corporation called Horzine has produced specimens maybe intentionally, maybe not. These are the “zombies” that you will be facing

This is a Gorefast. You want to shoot the Gorefast.

Arguably the most important aspect of a game is the gameplay; Killing Floor delivers and then some in that department. Much like Left 4 Dead, Killing Floor is primarily a cooperative multiplayer first person shooter in which players must survive against relentless assaults of specimens. However in Killing Floor the ante has been upped to six players (and on some custom servers up to 32) to try and take out the threat. While playing with random people can be fun, getting a group together with five of your friends is extremely rewarding during play itself. While Killing Floor takes some cues from Left 4 Dead, it also takes a couple from Counter-Strike as well which will be explained a little bit later.

The game is set up so on each of the 13 maps (those are the official ones made by Tripwire) there are 10 waves of specimens which the players must survive. However when a team beats the tenth wave there is still one left which will show up as wave 11 out of 10. This is the wave of The Patriarch . . . if it is your first time facing him I am sorry. Anyway in between waves the player can go to a trader where guns, body armor, grenades, and melee weapons may be purchased with money received from killing specimens and surviving the wave (which is where the Counter-Strike inspiration is drawn from). The gunplay is very satisfying and watching specimens walk around confused because they’re head was just blown off is just flat out funny.

The specimens themselves are varied and provide challenges each in their own way. Another way that the player can combat the threat is with perks, however these perks aren’t the typical ones that are tied to specific weapons and skills. Before each match a player picks one of seven perks to choose from. When playing as a specific perk, all it affects are bonuses that each perk earns as you rank it up. The leveling up of each perk is somewhat unique in which you rank up specific perks as you meet requirements in them. For example I could be playing as the Sharpshooter perk which focuses on headshots but if I toss a grenade and blow some guys up, I will level up my Demolitions perk. The system is fluid and works very well. 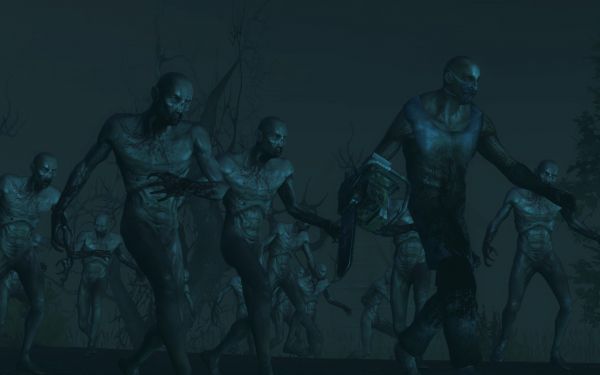 There are many zombies who want nothing more than to annihilate you. Better get them before they get you.

In the graphics department, Killing Floor doesn’t look the best. It is not a bad looking game but it is not up to par with some of the better looking games on the PC. The designs for the characters are enemies are varied and interesting as well which makes up for some of the lack of polish. The maps are well realized and look good as well.

The music in Killing Floor is there primarily for ambience but is completely forgettable when all is said and done. Characters will sometimes have little one liners in kind of British accents which can be entertaining. Then there is the trader who is always making innuendo about how she likes “the big guns” or asking the player to “come and get me”. It can be kind of awkward and unnecessary but doesn’t detract from the game at all.

Killing Floor is one of the most fun cooperative multiplayer experiences out there. From the camaraderie of fighting off specimens with five of your friends to the constant upgrades there is something for all FPS fans out there. While it doesn’t have the best production values, it overcomes them with the rest of the package. Killing Floor is a great game that overcomes its few downfalls to become truly fun and entertaining. If you own a PC, you should own Killing Floor.

Disclosure: This game was reviewed after the “Heavy Metal” and “Level Up” downloadable content packs were automatically installed.

Enemies are varied and fun to take down, the gunplay is very satisfying, Counter-Strike esque buy system is implemented very well, Perks are fluid and work awesomely, Co-op with five of your friends.

Presentation could be better, Graphics aren't extremely strong, The audio is overall forgettable

Killing Floor is a fantastic co-op shooter that no PC gamer should miss.

A copy of this game was provided by developer/publisher for review purposes. Click here to know more about our Reviews Policy.
Tagged With: Killing Floor, pc