Kingdom Hearts: 358/2 Days is the latest release in the popular Kingdom Hearts series, usually described as an action-RPG, blending together the Disney and Final Fantasy worlds. While the first three games in the series focused on Sora, the Keyblade’s chosen one, this one focuses on Roxas, a Nobody in the mysterious group of Nobodies, known as Organization XIII.

Being a spin-off of the series, it tries to be different from the other, major installments. First off, it focuses on a  character, who appeared briefly in the beginning of Kingdom Hearts II, Roxas. While Kingdom Hearts II’s intro and the first hour was very confusing to everyone, since Roxas was a new character, who’s backstory wasn’t explained at all. Kingdom Hearts 358/2 Days is set on revealing who he is, what he went through before Kingdom Hearts II, and all his relations with the Organization’s other members. Unfortunately, the Organization being a group of Nobodies who have to carry out ’missions’ that their leader gives them is a sign of one of the worst (if you could call them that) flaws in the game. Due to the game progressing through missions and days, you have to visit the hub world again, and again, to accept missions and advance days. While in Kingdom Hearts I and II, everything was open, Sora had his goals, and he could go between worlds and try to reach that goal, Kingdom Hearts 358/2 Days begins with no goal at all. You are Roxas, a new Nobody in the Organization XIII, and you have no memory. The game’s story begins incredibly boringly and slowly, waiting for you to do, basically, a very long tutorial sequence, and even when that’s over, feeding you with repetitive and boring missions. The missions, for a long time, take place in only one world, Twilight Town. When you’re finally sick of that world, a new world comes along, and while this may bring some hope to the player, the number of worlds in this game is very disappointing. 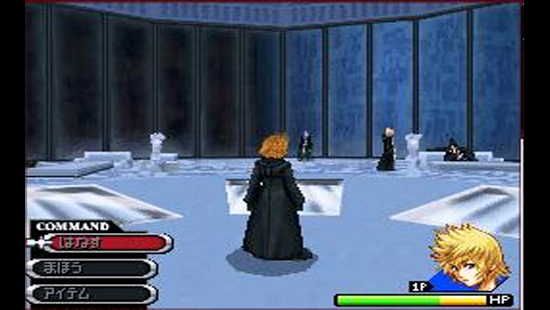 Expect to see a lot of this.

There are about 6 worlds in total, including the hub world. Compared to the other games in the series, excluding Chains of Memories, this is a very small number. The worlds are also much smaller and due to the Organization being a ’secret’ organization, the only thing you can do in those worlds is collect treasures from chests and destroy the Heartless the Organization has ordered you to. There is almost no interaction with other Disney characters in the game, and that makes the game feel abit lifeless, dull, and not as memorable. The only things interesting about the story, or much in the game, is fighting Heartless, which is fun, due to the series’ great gameplay, and what happens with the Organization, specifically between Roxas, Axel and Xion. While it might sound like the game is incredibly boring and dull, it manages to redeem itself with the second half of the game. The story gets more interesting, there are more twists to it, and tension grows and secrets are revealed, breaking the relations between the Organization’s member, which means that Roxas, for example, decided to escape at one point, after which the game, fortunately, doesn’t follow the “take-a-mission“ pattern that it used to. It’s disappointing though, that the game turns into what it should have been the whole time near the end.

The gameplay has been much improved. While not having any forms, like Sora had (Wisdom, Valor, Final and Master) Roxas has Limit Breaks, which are powerful attacks,and what become available if you have very little HP left. They are very fun and satisfying to use. Instead of just equipping items, the game uses a Panel system, where every item takes up one square, but some items can be linked, and have drawn-out  barriers to show how many items you can link to them. It’s definitely nice to be able to equip items this way, trying to work out the best solutions and so on. Everything else is the same, old Kingdom Hearts fare. The one thing that does hinder it’s great gameplay is the Nintendo DS itself. A 3D action game with a D-Pad? Thanks, but not exactly the best way to play one. Be ready for unconformity. 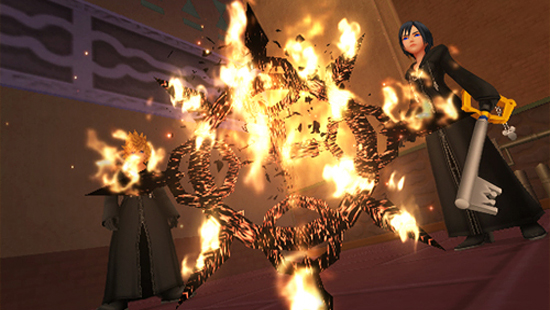 The cutscenes are extremely well done.

The graphics, for a 3D game on the Nintendo DS, are great. While the characters’ facial movement is non-existent, the models and animation during gameplay, and the cutscenes, all, especially the cutscenes, are extremely well done. One of the main features that this game hyped, was the multiplayer, Mission Mode, that lets you play with your friends, locally, using all the Organization’s members, and a few unlockable characters. This is basically just multiplayer Kingdom Hearts, where you play through the missions you did in Story Mode, only this time without the cutscenes and conversations. It is very fun to do missions together, or to fight against each other, and hugely improves the game’s longevity and lasting appeal.

Overall, an entertaining game, but to big fans of the other games in the series, this may be a bit of a disappointment.

Not a single Final Fantasy character, doesn't feel as epic as the other installments in the series, repetitive, feels a bit lifeless at times.

Final Verdict:
SUPERB
Despite a great ending and gameplay, the lack of variety, which can be written off as being due to the system's limitations, keeps this game from being as good as it could've been.
A copy of this game was provided by Developer/Publisher/Distributor/PR Agency for review purposes. Click here to know more about our Reviews Policy.