Another great addition to the Kingdom Hearts franchise that paves the way for a big, numbered sequel.

To commemorate the 10th anniversary of Kingdom Hearts, a 3D entry in the franchise; Kingdom Hearts 3D: Dream Drop Distance has been released to further make way for the inevitable and long awaited numbered sequel; Kingdom Hearts III.  A game where King Mickey rules the worlds featuring many classic Disney and favourite Final Fantasy characters sounds like fanboyish dream of a 14-year-old child. However in 2002 Kingdom Hearts was released on the Playstation 2 with the most unexpected of crossovers between Final Fantasy and Disney along with a deep storyline with themes that are familiar to the JRPG games such as heart, family, the constant battle between darkness and light, good and evil and so on. 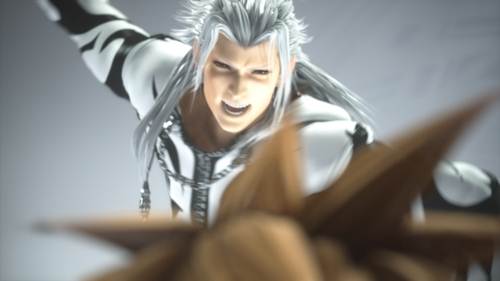 Pretty heavy stuff for a Disney game, right? Kingdom Hearts proved to be a huge success and from then on we’ve journeyed with Sora, Donald, Goofy and a plethora of other characters that seem to be crawling out the woodwork in this delightful franchise, through a numbered sequel and a good amount of spinoffs and prequels on different handheld consoles.

Kingdom Hearts 3D: Dream Drop Distance seems to be the last of these spinoffs and is finally setting the stones for the final conflict in Kingdom Hearts III. Newcomers to the franchise have the chance to catch up on the plots of the previous games through several optional flashback sequences that also act as tutorials. While Keyblade veterans will be left feeling a little baffled at the sudden return to Sora and Riku’s adventure as we haven’t seen them properly since all the way back in Kingdom Hearts II. The story this time continues straight after the second instalment where Sora and Riku need to take “The Mark Of Mastery Exam” set by the wise wizard Yen-Sid (Disney know-it-alls will recognise this guy from the animated short “The Sorcerer’s Apprentice”) to finally become Keyblade Masters. So we’re set off on a journey with Riku and Sora through 7 new worlds that are in a state of “deep sleep” and need to be awakened by Sora and Riku’s keyblades.

New Disney worlds are included this time round such as Les Cite Des Cloches featuring the cast of “The Hunchback of Notre Dame” The Grid is also on the destination list where we revisit the world of Tron among with a few others. The worlds are colourful and wonderfully realised with characters that stay true to their film counterparts as well as sound exactly the same with the help of some great voice acting. However the major gripe I have with these environments in Kingdom Hearts 3D and every other KH game in fact is the fact that they feel a little too empty at times and sometimes don’t necessarily give off the feeling that you’re standing say in the middle of Paris in front of the Notre Dame. The environments are a little too blocky, almost feeling like a stage production at times. That being said the cutscenes simply look like they’ve been ripped straight out of the cartoons and converted into 3D. Seeing Sora interact with my old favourite Disney characters has always been a highlight of this franchise and continues to be to this day. 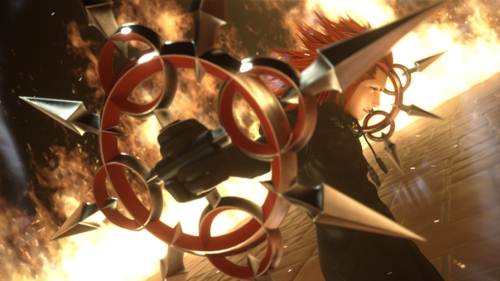 Gameplay wise many of the Kingdom Hearts staples have remained with a good few new concepts thrown in such as raising a friendly Dream Eater which can take several forms such as a cat like creature. These can be interacted with through the stylus and placed in our world through the AR cards included in the box which is a fun touch. Dream Eaters aren’t just there for play though, they are welcome allies when it comes to fighting the nightmarish hordes of “Nightmare” Dream Eaters. Fighting alongside you in a similar fashion as say Donald and Goofy would in previous titles these little guys will provide a good amount of backup. When their Link meter is filled during combat a devastating combo move between themselves and either Sora or Riku can be launched with dazzling effects on the 3D screen.

Kindgom Hearts 3D also brings the addition of Flowmotion combat which can be activated at any point by simply bounding at an enemy, lamppost or wall or any other pieces of the environment for that matter. It allows free movement between the environment in a spectacular fashion by sliding along poles, dashing through the air amidst sparkles and lights and flying around enemies in a constant combo, unleashing special attacks as you go. This new system is easy to get the hang of and feels completely natural. Dashing around the arena, hacking and slicing, jumping and rolling, while crushing the enemies makes any other KH game’s combat look tiresome and sluggish. It’s a much welcome addition really injects some excitement and variety into a stale combat system. 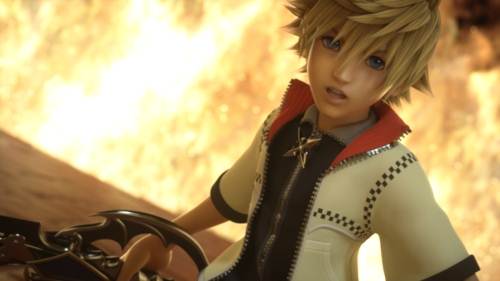 Finally the Drop system which forces the player to switch between playing as Sora and Riku in their own respective storylines is a clever way to ensure not one side is ignored. Our two heroes are in parallel worlds, which basically means they look the same, however they aren’t connected. They both need to use their keyblades to reunite the two sides of the world they are in. This sounds like a lot of backtracking between two stories right? Well Square Enix has done a nice job in making sure playing through the same environment with either Sora or Riku is never the same. Bosses are switched up and the stories vary drastically.

When the Drop system kicks in the player is left with a short amount of time to finish up their affairs with whatever character they’re playing as before they’re essentially dropped into the other’s story. When you return to that character you’ll be back exactly where you left off. The first time I was “Dropped” I was in the midst of a tense battle with a giant “Nightmare” Dream Eater. Seeing the timer tick down during this battle only served to make it even tenser. The ability to drop before this timer hits is also there should you feel that you’d rather explore Riku’s story at the time being than Sora’s for example. It’s a nice touch that means there’s hardly a dull moment between the two parallel stories.

The 3D is greatly utilised here and simply looks amazing with all the firework-esque effects popping out of the screen. The intro video to the “Dearly Beloved” track in true Kingdom Hearts tradition was visually impressive while the soundtrack still to this day has the same tear-jerking effect as it did 10 years ago.

Great voice acting from the returned cast. Fun additions like the Flowmotion and Drop systems. Possibly the best graphics on the system to date.

Blocky and lifeless environments at times. Confusing story in places.

Another great addition to the Kingdom Hearts franchise that paves the way for a big, numbered sequel.

A copy of this game was provided by developer/publisher for review purposes. Click here to know more about our Reviews Policy.
Tagged With: 3DS, Kingdom Hearts 3D: Dream Drop Distance, Nintendo