W henever somebody rattles off the pantheon of Nintendo greats, Kirby is easy to list among the 800-pound gorillas like Mario, Zelda and (no pun intended) Donkey Kong. But though he is often included, Kirby and his distinct copy ability aren’t often given the respect his tenure would usually demand, and he’s gone off the grid repeatedly, reduced to occasionally showing up as Nintendo’s guinea pig when they wanted something to headline a wild new gameplay style.

Mirroring his flexible form, Nintendo has had the tuff pink puff frontline in a ton of titles ranging from brick breaker clone, ‘Kirby Block Ball’ to the touch screen driven ‘Canvas Curse’. While his return to consoles and his platforming roots only happened rather recently with ‘Return to Dream Land’, ‘Kirby Triple Deluxe’ ups the ante on the formula introduced in the Wii title and polishes it to a mirror shine, resulting in a truly fantastic experience no 3DS owner should miss.

Kirby has never demanded a lot from its players, and the story sets itself up just enough before stepping out of the way of the fun. One fine Dream Land morning, Kirby wakes up to find his home surprisingly lifted to the clouds, and he soon finds the castle of King Dedede further up the Dreamstalk. After Kirby walks in on a strange spider-like creature abducting the bumbling royalty, he races off in pursuit.

This simple setup does all it needs to do as an excuse to dive into the fantastically designed, adorable worlds of Triple Deluxe. The bouncy, colourful worlds Kirby journeys through up the Dreamstalk follow basic platformer tropes, yet they all vary widely within each world and every level either introduces or iterates on a unique mechanic. You’ll do anything from avoiding the cannon fire of a distant tank to relying on the reflections in a mirror to show you the true nature of a platform that isn’t really there. No matter what gets thrown at Kirby, every level is given an identity of its own. 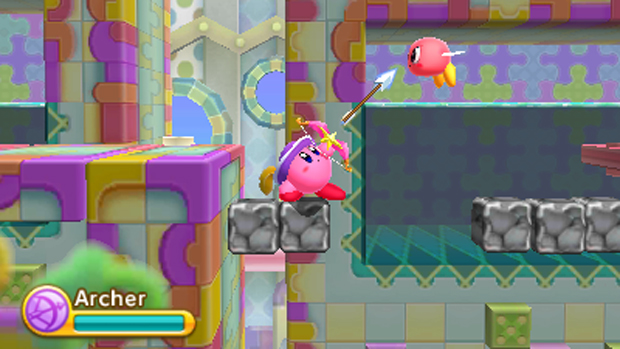 "The interplay between layers lends the whole game a fresh three dimensional look and feeling, despite Kirby remaining on a two dimensional axis the whole time. "

New to Triple Deluxe are the shift stars, which are located throughout each level and open up whole new approaches to level design. Multiple tiers pile over each other through the background and foreground, making levels play more akin to newer Donkey Kong titles than say, LittleBigPlanet. While Kirby’s only interaction between the stacked levels is using these stars to move between them, enemies and bosses, as well as level elements take full advantage of them, bombarding Kirby with fire from the background or opening steel blocks on one plane with a bomb block or giant pole on another. The interplay between layers lends the whole game a fresh three dimensional look and feeling, despite Kirby remaining on a two dimensional axis the whole time.

3D effects play into this multi-tiered design fantastically and reveal tricks like off center enemies, that without the extra dimension would hide the fact that you could pass safely. The gyro sensor is also smartly leveraged for the occasional tilting to move a lift or aim a missile to open a new path, fitting the feature in naturally instead of becoming overbearing.

Bosses in particular use the background layers and 3D to great effect, whether making attacks barreling towards you more obvious to facilitate easier dodging, or singeing the screen to obstruct your vision. The bosses highlight the best of the mechanics and transform them from standard punch ups to memorable exhibitions.

Several new copy abilities are introduced to Triple Deluxe such as the hawk-eyed ‘Archer’ or the tumbling ‘Circus’. Even though not all the new abilities hit the mark, and some are a better fit for the game and generally more fun to use than others, all copy abilities new and old are more flexible than ever with a variety of moves to a single ability. This decision to lend far more utility to each one lets more of them shine on their own merits instead of being weights to hold onto for puzzle solving, and maintains their prime function of challenging you to change up your play style over just being standard power-ups. 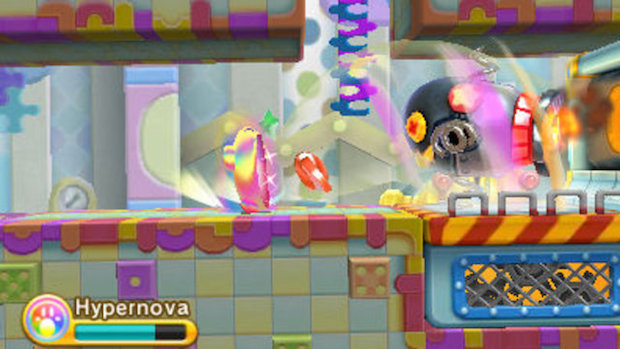 "You’ll manipulate wrecking balls, and pull blocks to crush hapless foes below in one instance...and each time always feels distinct and gives the feeling of commanding amazing power. "

Of particular note is the Hypernova ability, an extension of the super abilities and hyper-powered sucking seen previously. Specialized sections grant you the wildly visual power up and challenge you to manipulate the environment and solve basic puzzles, frequently choosing to use it smartly instead of simply falling back on basic rampaging.

While plenty of time with Hypernova is allotted to mowing over your foes using the superior suction, including a memorable late game boss mauling, you’ll also manipulate wrecking balls, and pull blocks to crush hapless foes below in one instance, while in the next you’ll manipulate snowmen heads onto the proper body and move a laser to melt ice in the next. Each time always feels distinct and gives the feeling of commanding amazing power.

Collectable sun stones throughout each level facilitate progression, and while bosses do demand a modest number collected before they’ll reveal themselves, collecting them all in a world unlocks a special, and usually difficult EX level. The stones aren’t terribly difficult to find; an adventurous player with an inquisitive mind will stumble into more than enough to finish the main quest, and the EX levels offer suitable reward for those dedicated enough to hunt each down. The game also includes keychains to collect as a secondary objective, and while there’s no benefit to doing so, they offer a brief museum of Kirby friends and foes past should you pursue (or spend play coins on) them.

Extra modes are always on the menu for Kirby, and Triple Deluxe doesn’t disappoint on this front either. The primary multiplayer mode in the game, and worth special attention is Kirby Fighters, which plays something like a Smash Bros lite on stages inspired by past Kirby titles. Though it only has ten abilities on display, omitting several obvious exclusions and a few disappointing cuts, the mode leverages the enhanced function of the abilities it does offer to create a fun distraction alone, and a hilarious brawl with buddies. The direct confrontation utilizes things like guarding that might not come up as much in the story mode, yet could mean the difference between victory and defeat, even in the ‘Smash Bros’ Classic mode reminiscent single player ‘gauntlet’. 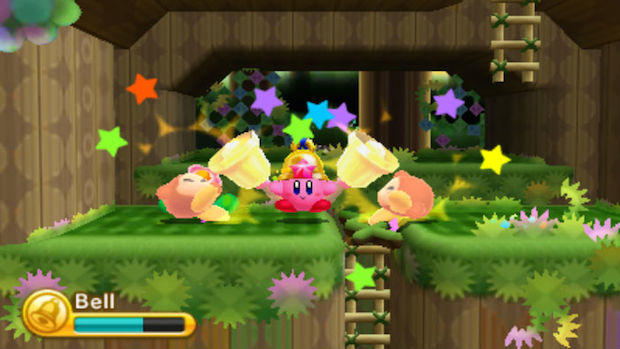 "The primary multiplayer mode in the game, and worth special attention is Kirby Fighters, which plays something like a Smash Bros lite on stages inspired by past Kirby titles. "

Dedede’s Drum Dash alternatively offers rhythmic platforming action vaguely relatable to HarmoKnight. The mode remixes a few classic tracks from the series, and asks you to maneuver the massive king across floating drums. A perfect run will follow the beat, but it’s not strictly necessary to hit each note to make it through. Though the songs in the mode can be counted on a single hand, should it be to your liking it can take a while to master each tune for that perfect run. Following the completion of the story, two more modes unlock for your score chasing pleasure, including a boss rush and an extra special run I would hate to spoil here. Let’s just say it’s a meaty mode that will add several more ticks to your activity log.

Kirby Triple Deluxe has really been one of the most pleasant surprises of the year, and on the 3DS period. The few complaints that can be levied against Kirby are so much noise among the pleasant environments, nuanced level design, smartly implemented system features and deep bonus modes. The collectables balance perfectly, never being too in the way of progression and encouraging exploration, while rewarding completionists for their time in tracking down all of them.

Powers new and old are satisfying to use and bosses highlight the best of the mechanics, becoming some of the best in the series. By remembering where it comes from and catapulting itself off its predecessors and the hardware it’s on to launch itself to something greater than ever, Kirby Triple Deluxe earns its spot on the best of 3DS shortlist and is not one to miss.

The layered levels are flawlessly designed, weaving in a fresh three dimensional feeling to the game. Level gimmicks and motion controls smartly weave into the level design, iterating on themselves on the few occasions they even return. 3D genuinely enhances gameplay, offering a better view on the multi-tiered stages and the bosses leverage everything into another level completely. Bonus modes are all worth exploring and bring out the true nuance of the copy abilities and combat. Collectables are balanced amazingly well, never getting in the way of progress while facilitating exploration. Hypernova is consistently interesting to use and makes you feel appropriately powerful.

Nothing significant at all. The few complaints that could be brought up amount to nitpicks for the sake of nitpicks.

Final Verdict:
EDITOR’S CHOICE
Amazingly well designed, familiar yet fresh and bursting with charm. The final word is that this is simply Kirby in top form. It leverages it’s legacy to amazing effect and leaps off the system it’s on to create something truly special.
A copy of this game was provided by Developer/Publisher/Distributor/PR Agency for review purposes. Click here to know more about our Reviews Policy.