Generally speaking, movie tie in games disappoint on a number of levels. This is largely to do with rushed development cycles in order to match the film’s release, but it is also to do with film plot pacing seldom working well in a game. Whilst Kung Fu Panda 2 offers a plot that is unique and separate from the film, it still fails to offer a solid gameplay pace. It also suffers from said swift development cycle, resulting in so many technical problems that it made my eyes bleed. 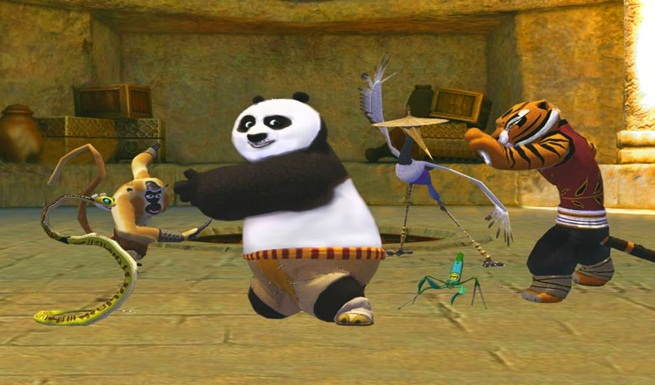 At least all the characters from the film are faithfully recreated

The story leads on from where the film ended, with Po having defeated Shen and restoring peace to Gongmen City; sort of. In the ensuing chaos a gang of wolf mercenaries begin terrorising the populace, and it’s up to Po and the gang to put a stop to them. The team deserve credit for trying to create an original tale, and it manages to fit into the Kung Fu Panda universe by effectively portraying all the characters from the film. Sadly though, this is where my praise for the game ends abruptly.

Though half of the game is taken up with cut scenes, you do actually have to play it at some point. When you do, all that awaits is loss and despair. A standard third person platformer/brawler, Kung Fu Panda 2 suffers from the worst afflictions that plague the back ends of the genre. A predictable light and heavy attack control scheme and the occasional dodge or partner assist is all that prevents the inevitable boredom, and it doesn’t do a very good job. The fighting is repetitive, tedious and highly uninspired. It doesn’t help that it is also horrendously easy. 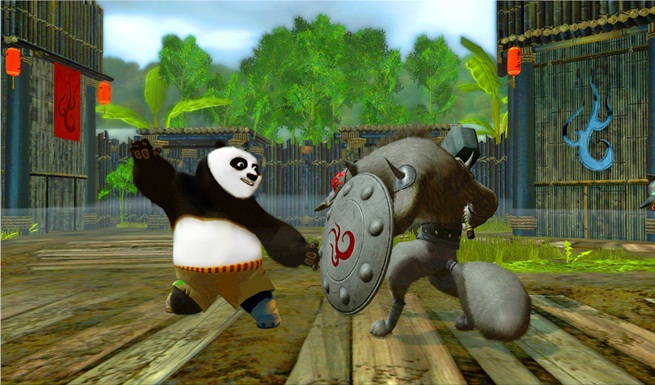 This is about as exciting as Kung Fu Panda 2 gets

It’s clear that somebody twigged on to the repetitive combat, leading to new moves being introduced to keep players involved. They only serve to make the game easier however, ironically making the combat even more annoying and forgettable. The odd puzzle is also thrown in for good measure, though so many obvious clues are given that they may as well not even be there. They too pose no challenge for anyone with an IQ in the double figures.

Considering how expertly crafted the visuals are in the Kung Fu Panda films, it is laughable that the game looks so awful. A weird fur effect plagues all the animal like creatures that grace the game’s world. A serious lack of anti-aliasing makes everything appear grainy and unpolished, and a dodgy motion blur effect makes every camera pan a nauseating and amateur-looking affair. The screen tears regularly and, to top it all off, the frame rate plummets the moment anything seems to happen on screen. I honestly haven’t seen a game so poorly designed in a long time. It made me a little bit sad. I have no good words to say about KFP2’s presentation. Even the menu screen looks like hell. 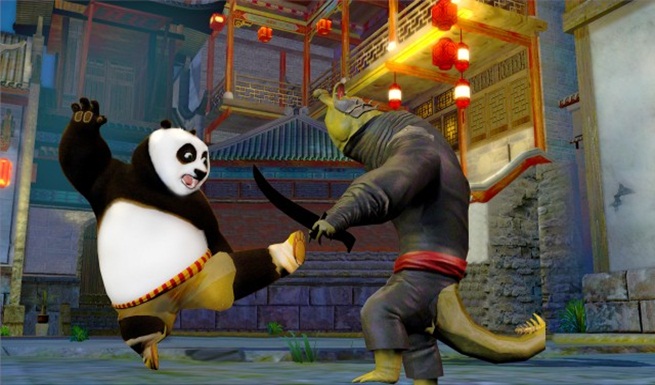 The visuals look bad enough in a screenshot, but the moving image is even worse

When it boils down to it, I would consider the very fact that this game has been released a crime. Not against the industry or any kind of moral code, but a real crime that should be reported. If somebody sold me a bag full of faeces for £40 on the street, I would report him to every government body possible in the hope of shutting him down. This is what I want to do with Kung Fu Panda 2 but, in the absence of any kind of organisation that can forcibly regulate the quality of games, it seems my only option is to warn potential consumers of what is on offer here. A short and uninspired romp that lasts no more than three hours is not worth the asking price in the slightest. The only way KFP2 would be worth it is if they paid you to take it off their hands. Until they do this, avoid it like the plague.

A new story that is separate from the films, All your favourite characters from the movie are present

Final Verdict:
POOR
Even though Kung Fu Panda 2 is a game clearly aimed at children, I doubt even the youngest of gamers will be able to put up with the uninspired gameplay and technical blunders present in this movie tie in title
A copy of this game was provided by Developer/Publisher/Distributor/PR Agency for review purposes. Click here to know more about our Reviews Policy.