Laser League Interview: Blink And You Are Dead

John Ribbins, co-founder of Roll7 answered some of our questions about their upcoming game, Laser League.

Laser League is an upcoming game by Roll7, and in it players will control neon-colored characters against an opposing team. Players will battle over the control of nodes and they can use certain special abilities to help them in battle. The gameplay has drawn favorable comparisons to other fast-paced titles like Rocket League, so if you’re a fan of fast-paced action along with some strategy, then this is the game for you.

John Ribbins, one of the co-founders of Roll7 answered some of our questions about the game and you can read the entire interview below. 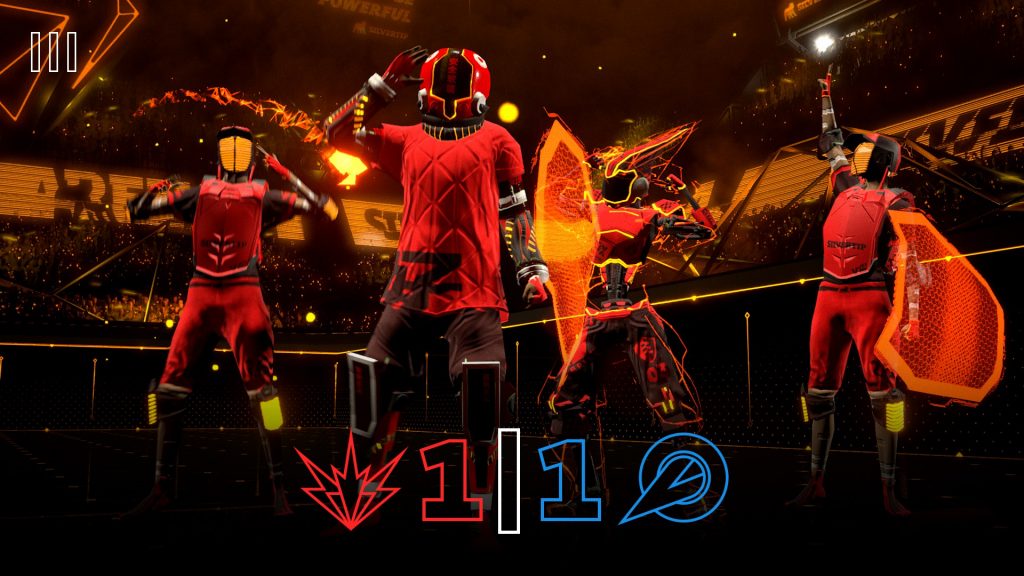 "I really wanted the characters to look like they could be impact-sports players of the future. We took a lot of influence from what high end brands like Nike and Adidas are doing in American Football, Icehockey and MTX prototype gear."

Roll7 has had a rather eclectic range of titles over the past few years from Not A Hero to OlliOlli. What suddenly motivated the idea behind Laser League?

Originally Laser League was not that different from OlliOlli or Not A Hero. It started life as a top-down, pixel art, local multiplayer title. We actually built the first prototype of Not A Hero around the same time that we were finishing up with OlliOlli one. It’s something that sat on the back burner for a really long time. We’d take it to shows and play it with other indie devs, and lots of people would tell us it was a project we should do something with, but I think we wanted it to be something really special. It wasn’t until me and Simon (another Roll7 Founder) were playing Rocket League one night and just sorta said “What if we tried to make something that was 3D and futuristic and Online, instead of something pixel art?” It kind of grew from there.

There’s a definite Rollerball vibe with various brands and characters battling for supremacy. What films and books influenced the overall theme and atmosphere of Laser League?

I think Rollerball and Tron were certainly early influences, but we gradually drew away from those. I guess there’s neon lights on black, so it’s always going to draw some Tron comparisons, although as you say, we’re a little more focussed on brands and branding.
I really wanted the characters to look like they could be impact-sports players of the future. We took a lot of influence from what high end brands like Nike and Adidas are doing in American Football, Icehockey and MTX prototype gear. But I drew influences from all over; Aaron Beck’s incredible machine concept art, Fashion designers like Gareth Pugh, Machine56 and Issey Miyake, Matteo Scalera’s characters in Black Science even other video games like WipeOut.

Could you tell us more about the art style? What were some of the challenges faced in depicting the excessive neon while also minimizing visual noise in competitive matches?

The game has been through so many iterations on that side of things. In the end we came to the conclusion that in menus / replays / celebrations the most important thing was to have characters that looked cool and interesting. They kinda set the world.
Obviously in game, the characters are super far from the camera, you can still tell your little player is wearing the kit you’ve chosen, but the tiny details are obviously hidden. With this in mind we made the Visual FX for each of the games classes really OTT. Once you’re in game, the most important thing is just seeing this big blade, or a flashing orb, or crackling electricity.
The other lesson learned as we progressed is that less is more. It’s so easy with Unreal Engine to have some many crazy effects and flashes and moving stuff, but we really tried to tone that down, and just use the super crazy FX to highlight gameplay moments. For example, the brightest flashes are only shown when a player is eliminated. It lights up the whole pitch in the eliminated player’s colour, giving this super clear telegraph to team mates that someone on their team is down!

With six classes and 2 ability modifiers each across 60 characters, there’s a fair amount of variety to playstyles. What are some of the crazier combinations and plays you’ve seen?

It’s nuts the combinations that people have come up with! There are some really obvious combos from the start – Shock/Blade is great for downing then eliminating other players, but we’ve seen some really deadly teams of Theif/Snipes and a couple of Thief/Thief/Thief combinations.
What’s interesting to be is that counters are constantly evolving. For a while a certain combination will be working really well for a team and it’ll look like it’s unbeatable. Then, someone will figure out a great counter to it and the whole strategy will collapse. Part of being good at the game is being prepared to change out your class for a different one (mid match) in order to better counter a strong team. It’s not a game where you can just be good at 1 class and stick to that 100% of the time.

How does the level design ultimately feed into the fast paced nature of the game? How do the power-ups change the flow of matches throughout?

Ha, funny you should mention that. The game was originally 30% faster over all. Like everything was sped up 30% more than it is now.
It gave the game this crazy pace and was really intense, but we found that there wasn’t enough headroom for skill. You had to be really, really good to survive for any length of time. At one point, we tried slowing the game down by about 15%, and suddenly realised there was so much more, well, time for players to do cool stuff – weave between beams, aim crazy attacks, counter other people’s moves.
Basically, by changing the game from ultra-split-second gameplay to something 30% slower, we made it possible for more strategies and tactics to emerge. That’s very much carried across into the level design too. Patterns build slowly initially, letting you learn the initial “shape” of the pattern. We then generally try to work towards a Kill-point – a moment where the pattern is so complex/fast/intricate that one team will imminently win.
The key to being a good player is to learn the movements of each pattern, and learn which areas of each map are essential to victory. Powerups build on top of this, but initially just knowing what each one does and whether you actually want to collect it is the most important thing. 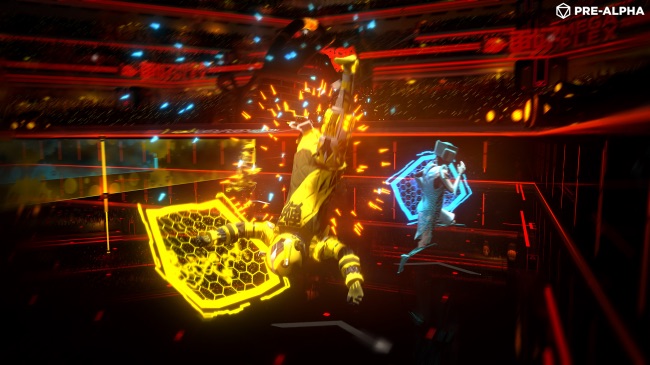 "We have a stack of additional content for the game, that will be coming out after launch -That’s new stadiums, powerups and patterns. Obviously these can give you very different ways to play and new challenges and tactics to learn."

Considering the game’s competitive PvP aspect, what can you tell us about the matchmaking and netcode? What are difficulties you’ve faced getting them to work smoothly?

I think like any small studio that’s doing Synchronous multiplayer across a stack of regions, we’re very much learning as we go. We have a great team who’ve built us a solid system, really it’s now about having it in the wild and improving it.
I’m really proud to be able to say that as yet nothing has totally fallen over or broken. We’ve only had a few crashes, but for a studio doing their first MP game, I think that’s a really big achievement.
We’re obviously working super hard to resolve those issues and it’s obviously crushing when you’re a small team and you want to fix things and get them updated for people as fast as possible, but at the same time you have to test and re-test every change you make because games are complicated and it’s easy to fix one thing and break 5 others.

I can say that by the time this goes to print we’ll have dropped a PC update that not only solves a bunch of minor issues, but also Massively optimises our net code and has the game running considerably smoother.

It’s fair to say that games are never really done, there is always more to be fixed and looked at! I think some of our biggest issues at the moment have been overall latency (which was good but not good enough) and we’ve had a fair few people complaining about colour blind options too. These are both things we’re looking to have working much better (or included) in the next couple of months. Obviously with any game, players want tons of features – Ranked Mode, Private Lobbies etc, these are all things that we can look to implement if the game gets the kind of reception on launch that we all hope for. At the moment we’re more focussed on making sure the core experience is solid, before augmenting it.

Furthermore, what is your post-launch plan for the game? What are some of the new things that players can look forward to in the future?

We have a stack of additional content for the game, that will be coming out after launch -That’s new stadiums, powerups and patterns. Obviously these can give you very different ways to play and new challenges and tactics to learn. There are some aesthetic additions in the works too (think new brands). From there I think we just have to wait and see what the future holds! If players enjoy the game, and want to see more, there’s a feature list the length of my arm that we’d love to get in there!

Will there be new modes and dedicated competitive tools in the coming months?

At the moment, the game is either 2v2 or 3v3 with the layout of the actual arena dictating if the play style is more King-of-the-hill or deathmatch etc.
It sounds slightly crazy, but Laser League is a relatively unique game, so rather than dilute the initial launch with a ton of different ways to play, we want to focus in on the core game and get players familiar with that before we start throwing in Ice Hockey mode or whatever!
As above, I think there’s totally appetite from us to have a competitive mode, but in order to do that we need a large enough player base that actually wants to play competitively. It’s something we’ll strongly consider if things go well.

I think I’ve probably said enough about the mechanics, I guess I’d just say that if you’re a fan of our previous titles (or twitchy, skill based arcade games in general) then give Laser League a go, it can look a little daunting from screenshots and videos, but it’s super easy to pick up and play!

When can we expect Laser League to launch?

I can’t say too much at this point, but lets say May should be a laser-y time of year