Last Half of Darkness: Tomb of Zojir Review

Posted By George Reith | On 27th, Dec. 2010 Under Reviews | Follow This Author @GNReith

Sometimes you need to know when to let a good thing go. The survival horror and point and click adventure genres have been on the cusp of relevance for quite some time now and most of the key franchises in these genres have either, evolved into something different entirely (Resident Evil for instance), or just ended abruptly. The sad problem is that, in trying to keep these genres of old alive and well, a game must contain a lot of the clichés and problems that may have been dragging the genre down in the first place in order to sustain the tradition. Unfortunately this is a paradigm that Tomb of Zojir falls foul of and, whilst it plays out as an affectionate homage to the point and click games of old, it is probably a bit too much like Myst for its own good.

The horror aspect of Tomb of Zojir lies more in its aesthetics as opposed to any actual survival horror gameplay elements being present. The game admittedly has rather rudimentary graphics that are more reminiscent of last decades’ PC games, but they aren’t terrible to the point of being game breaking and there is the obvious advantage of being able to run the game on very low powered systems as a result of this. The visuals also help to create a rather isolated and eerie atmosphere though this is arguably more to do with the soundtrack, which is much more worthy of praise. The music largely revolves around a sparse, yet surprisingly impacting orchestration that really helps to deliver a unique atmosphere. The voice acting is also of a reasonable standard, even if it does occasionally sound like something out of an episode of Thunder cats or He man. 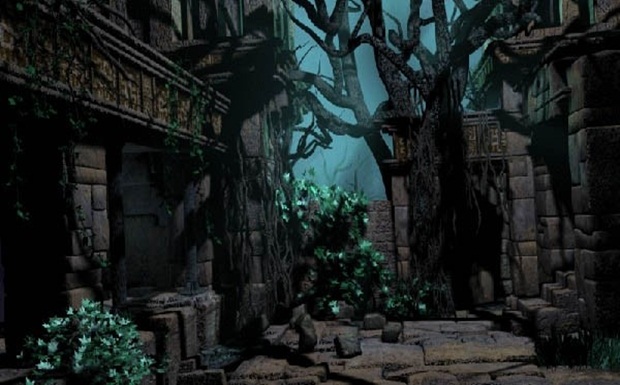 The environments are nicely detailed, even if the visuals are a little shoddy overall

The point and Click Adventure aspect comes out largely through the gameplay which, unsurprisingly, has you navigating around the island and solving puzzles using your mouse pointer. The general interface and set up will be familiar to anyone who has sampled this type of game before and, even if you haven’t played this particular genre before, it is all very easy to pick up and play. The engine runs reasonably smoothly but it isn’t all sunshine and rainbows. Though the game is reasonably glitch free, I did encounter a particularly painful game destroying glitch within about ten minutes of loading the game onto my PC that involved me having to restart the game in its entirety. I believe this to be an isolated case but it is, regardless, not exactly concerting to see something like that occurring so early on during my time with Tomb of Zojir.

The main content of the story revolves around you playing as “the stranger” who shows up on the mysterious island the game is set on. The game emulates Myst in the way that there is very little story initially given to you, as you are literally just put on the island and expected to go around exploring. The plot later kicks in as you discover that unless you return a series of relics to the eponymous Tomb of Zojir a great catastrophe will befall the world. The plot and characters you meet are all fairly by the book but, whilst they often do a good job of complementing the game’s isolated and chilling atmosphere, there is very little innovation occurring here in terms of narrative or storytelling. It is just a shame that it takes so much time for any real storytelling to occur as, whilst I rather enjoyed the old school “go and explore for the sake of it” antics provided by the beginning of the game, Tomb of Zojir would have been far more engaging an experience had the plot exposition begun slightly earlier. 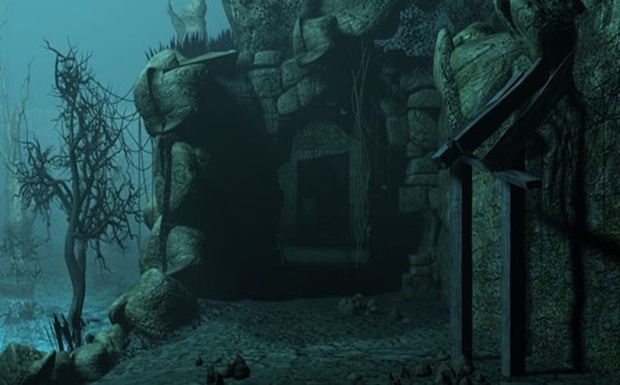 Though the plot may be a little on the watered down side, a decent suite of brain bending puzzles would be enough to recover the proceedings. Sadly this is only partially realised. The puzzles usually do follow a logical enough pattern, with none of those ridiculous safe cracking riddles that haunted my days of playing Myst. In fact much praise must be aimed at one particular puzzle that involves you having to use information printed on both the disc and manual to solve it. Whilst this does prevent the game from being distributed digitally in the future, it certainly is a nice alternative to the anti-piracy measures usually employed. Unfortunately there is still far too much searching around for obscure items to use. This is made even worse by the annoyingly dense fog effects the game employs, though you are able to disable these effects in the options. The problem of locating puzzle items would’ve been easy to solve had they included some kind of button that would highlight all usable items in the area as, if we’re perfectly honest, the search for the needle in the haystack is always the least enjoyable part of the point and click adventure genre. With this said, it is nice to see them try and meet fans halfway as the game’s official website has a very concise and in depth walk-through available for anyone who is stuck on the game. 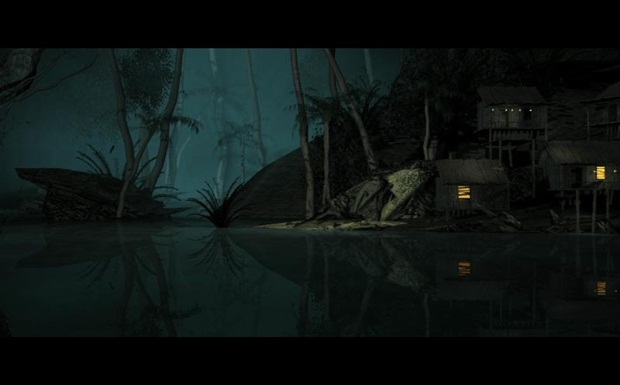 The key problem with Tomb of Zojir as a package is in its potential lifespan. This particular genre of game isn’t exactly renowned for hours of non-linear exploration, and Tomb of Zojir is no exception to this clocking in at a rough eight hours including head scratching time. It must be said that the claim on the back of the box that promises over twenty hours of non-linear gameplay is very optimistic indeed.

Tomb of Zojir is only a mediocre game at best, which is a shame as it blends two of my favourite genres that haven’t been getting much love or attention as of late. Yet, for all the criticisms I level at Tomb of Zojir, it must be said that these faults are more to do with staples of the genre rather than a particular failing on the game’s part. If you can withstand some of the unfriendly elements that have plagued point and click adventure games for generations you may be able to really get into the spirit of Tomb of Zojir, especially on account of its budget price point. It’s just a shame that the price point couldn’t have been slightly lower on account of the sheer brevity of the game. This is further compounded by the linear nature of the proceedings as Tomb of Zojir isn’t exactly a title that will warrant multiple play-throughs. Tomb of Zojir certainly has an old fashioned charm that will appeal to some but, with so many of the flaws that characterise the point and click genre, the demographic that will appreciate the game is very limited in scope. If you really dig your old school adventure games then you could do far worse than picking up Tomb of Zojir. For the rest of you though, Tomb of Zojir is a title that will be better off staying on the shelf.

Good use of audio, Games like this are a dying breed, Easy to pick up controls, Reasonably logical puzzles, Evokes a creepy atmosphere

Falls fail of the usual problems of the genre, Some lame dialogue, Short and entirely linear gameplay, Visuals are not especially impressive, Often too much searching around for the needle in the haystack

An attempt to blend the atmosphere of a survival horror game with classic point and click adventure gameplay, Tomb of Zojir is a nice attempt at continuing the genre but is a little too old fashioned for its own good

A copy of this game was provided by developer/publisher for review purposes. Click here to know more about our Reviews Policy.
Tagged With: Last Half of Darkness: Tomb of Zojir, pc