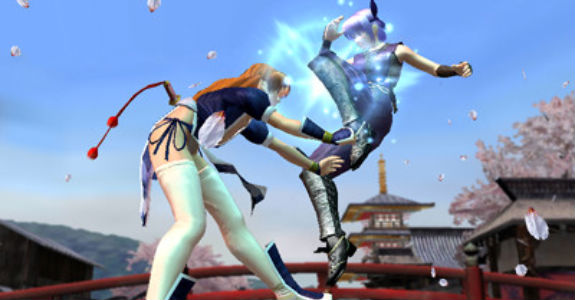 The SpotPass for the Nintendo 3DS has just had a recent update for Dead of Alive Dimensions including new Throwdown Challenges, Team NINJA and new costumes .  For those of you who don’t know, the game looks and plays amazing on the 3DS as well as the combat system being a combination between Dead or Alive 3 as well as 4.  Here is what the latest update will bring to the game, even though Nintendo is constantly updating games on the 3DS for download.

This latest update had ‘Team NINJA’ which included information on how to attain the 26th Secret Character, Shiden.  To unlock the secret character you must first have all other 25 characters unlocked then move the cursor to ‘Random’, choose a specific costume by pressing either Left Trigger + X, Right Trigger +X, or Left Trigger + Right Trigger + X.  Now there you have it and since there is a story to the game somewhat, Shiden is the father as well as teacher to Kasumi & Hayate.

More costumes are apparently on the way and you can check out all the ones you have attained the ‘Mode Select’ Screen. An SD is required to download and save most data with any game especially the Dead or Alive Dimensions Content like the costumes. TODAY IS THE LAST DAY TO TAKE PART IN THE SP THROWDOWN CHALLENGE than started on Tuesday 6/21/. You will challenge Jann Lee, who has dynamic striking ability and is a master at Jeet Kune Do, so watch out. I thought to one of the developers by an inch in my last Throwdown Challenge. Throwdown Challenges are where you can test your skills against opponents hand-picked by Team NINJA to fight in Throwdown Mode that is as “SP Challenger”. After the match, you’ll get a rare figurine (in-game) whether you win or lose. Winning the match might just net you something even cooler and you will have plenty of chances as updated are planned for a regular basis.

Rumor:
There is also a small rumor that there has been an unannounced update to to the Nintendo 3DS StreetPass allowing the counter to pass 99 player coins (you attain by simply walking around with your 3DS,and spend them on games built into to operating system). While I see no change like this Nintendo is also not commenting currently. Via –VG247, Via –The GoNintendo Forums