Given how many multiplayer shooters there are out there, when one comes along and offers something new and unique, you can’t help but take note of it. Blue Isle Studios’ LEAP recently launched in early access, and it very much seems to fit that bill so far. Offering what looks like a blistering blend of fast combat and movement across a variety of modes and maps, LEAP has the potential to turn into something special if its developers can handle things well on a consistent basis from this point forward. To learn more about the game, we recently reached out to the folks behind it with some out of our questions. Below, you can read our interview with Blue Isle Studios co-founders Brendan Frank and Alex Tintor.

NOTE: This interview was conducted prior to the game’s early access launch. 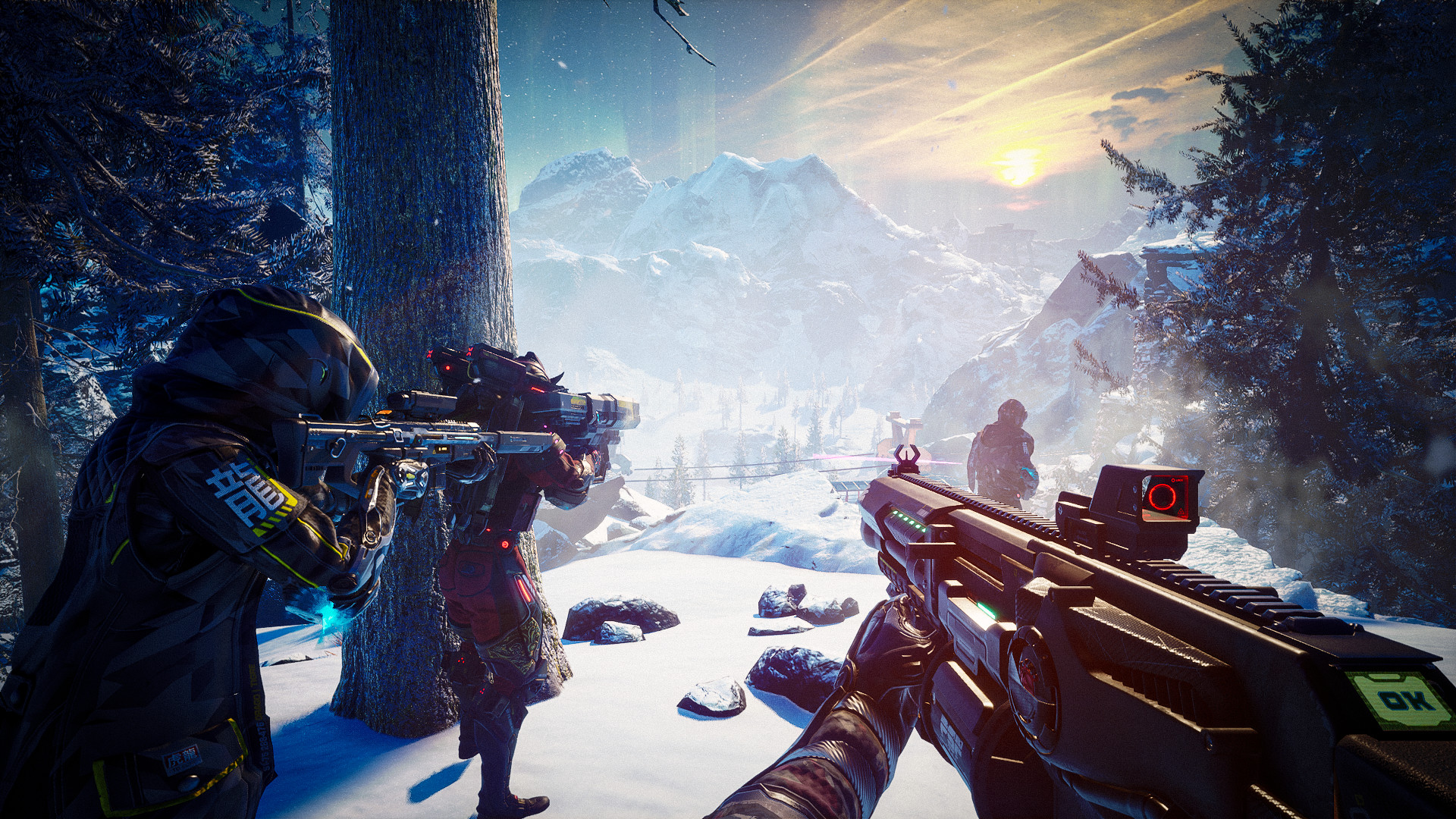 "From day one, movement was a core design pillar. We want you to be able to navigate in truly unique and fun ways."

What can you tell us about the playable classes in LEAP and the different play styles they will enable?

We’ve got four playable classes, which we call exosuits. Each one is quite different in how you play them. We wanted to make players feel like superheroes, but with machineguns, so we mixed in some familiar weapons with a lot of really unconventional stuff. Each class also comes equipped with an array of movement types and unique abilities which supports a lot of different plastyles. For example, our Pathfinder class will likely appeal to someone who plays a traditional shooter, but something like the Titan with its jetpack and ability to hover in the air like a gunship, or a Tech Ops who uses a combination of support and unique weapons. There really should be something for everyone to enjoy.

Movement seems like it’s going to be an important part of the core gameplay. How much of an emphasis does the game put on that, and how does something like that change how you approach map design?

From day one, movement was a core design pillar. We want you to be able to navigate in truly unique and fun ways. It makes a gunfight feel totally different since both players are often airborne. As such, everything we build has to be designed with this in mind and fortunately we had a lot of experience building environments for something like this from our previous game, Valley. We decided to focus mostly on large outdoor environments, give players a lot of room to roam around. In a traditional shooter, for example, something like a crate is an obstacle to hide behind or navigate around. In our game, our version of a crate is a full two-story house. You can hide behind it, run around it or soar right overtop by using your grappling hook or a quick double jump. It really forces you to rethink how you design and navigate a world like this.

What can you tell us about LEAP’s maps? What should players expect in terms of size and variety of the environments?

In terms of theming, most things are relatively grounded but set some time in the future. We wanted players to see an everyday object, but treat it in a completely different way that you normally would. It sort of enhances the feeling of power you get as a player. With that said, there is a lot of variety, we tried to pick really cool locations from around the world. In terms of size, our maps are quite large but are designed to scale in size depending on player count. Our map boundaries adjust and we’ve tried to design everything to be satisfying for both small and large groups of players. In our largest game modes, everything is quite wide open and free flowing. 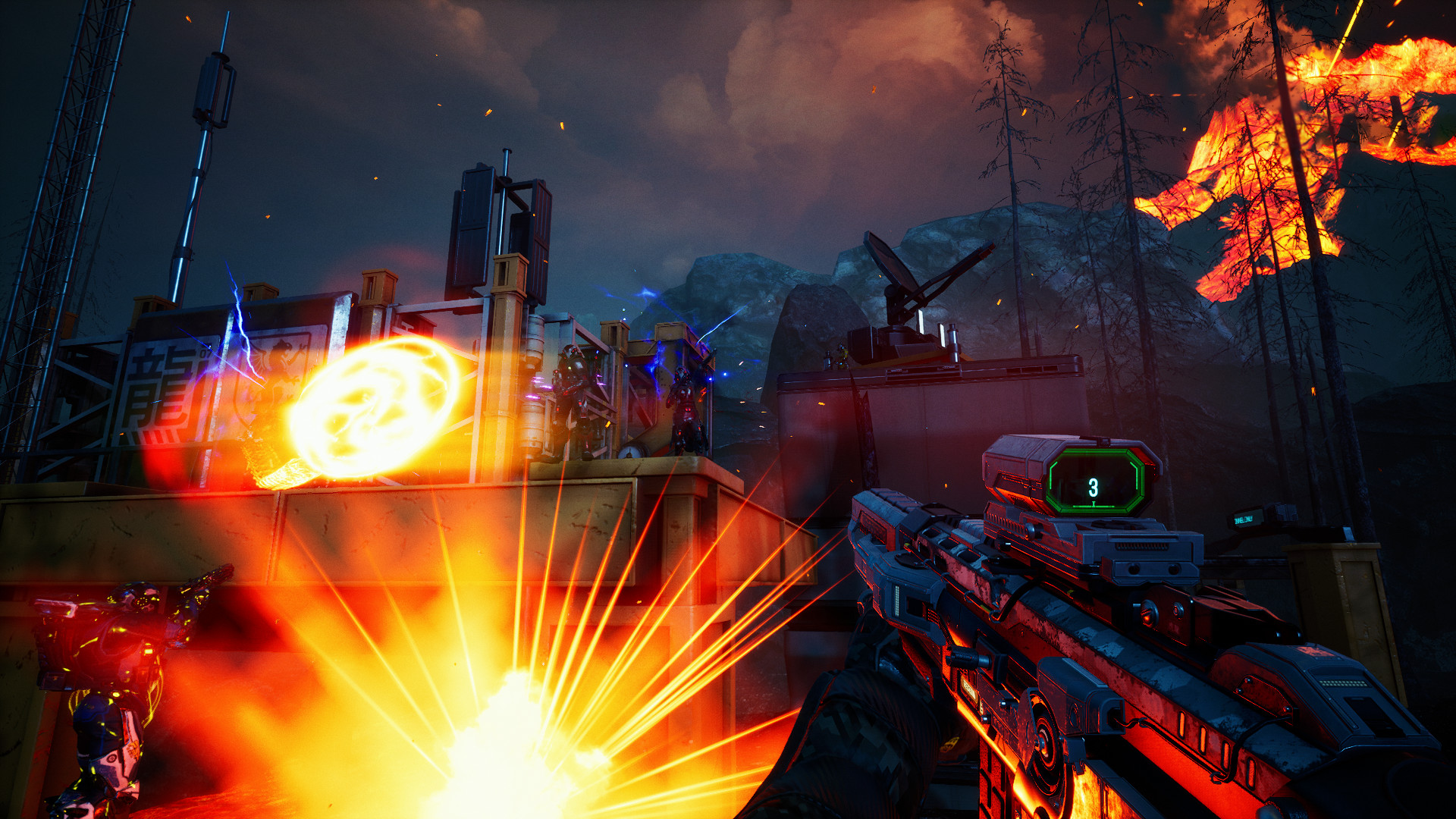 "Our map boundaries adjust and we’ve tried to design everything to be satisfying for both small and large groups of players. In our largest game modes, everything is quite wide open and free flowing."

With each map in LEAP having different variants for different modes, was the process of designing around those requirements a challenging one?

It is definitely a challenge, for example, designing a Capture the Core (our version of CTF) is totally different than a Control style map (capture points). With that said, the core of the game is how you move around the world and that means our maps need to be quite large. Because they are so large, we were actually able to pick different locations on the same map for different game modes. So if you played Capture the Core on our Haze map for example, that battle takes place in a totally different part compared to a Team Annihilation match (team deathmatch).

Can you tell us how the game’s overarching progression system will function?

Most in game actions you perform have an XP value associated with them. XP that you accumulate during a match helps you progress your main player rank and also levels up your individual exosuits. Leveling up your exosuits is important, because you unlock more gear, weapons and abilities for your loadouts. Additionally, there are thousands of unique cosmetic items you can unlock. Lastly, progression and XP leveling carries over across all game modes, whether you are playing a Special Operations PvE match, or one of our game modes within Competitive PvP play.

How extensive will the customization options in LEAP be?

I’d say reasonably extensive to start, with plans to significantly expand as we develop further. Each exosuit has a lot of different armor sets to unlock, all of our weapons have a lot of variety in paint styles. We’ve also got our personal vehicles which are pretty awesome, each of those have a lot of different paint jobs to choose from. Then there’s our player dances/emotes, weapon keychains and lots more coming. In total, we’ve got about one year’s worth of cosmetic content planned, with our ingame store cycling new items every day or week depending on rarity.

How much variety should players expect from the different personal vehicles in the game? Will each control differently?

In our early versions, the personal vehicles all controlled differently. It was fun but also presented a lot of challenges, mostly in terms of gameplay balancing. We ended up simplifying the system and giving the same movement abilities and stats to all of our personal vehicles, so today they are more of a visual expression type of thing instead of a gameplay decision for a player to make. For example, do you want to ride into battle on a robotic moose, do backflips on a hoverboard, or jump around in a bouncy ball? We’ve got lots of options to choose from, some are kind of funny and others are more serious looking. 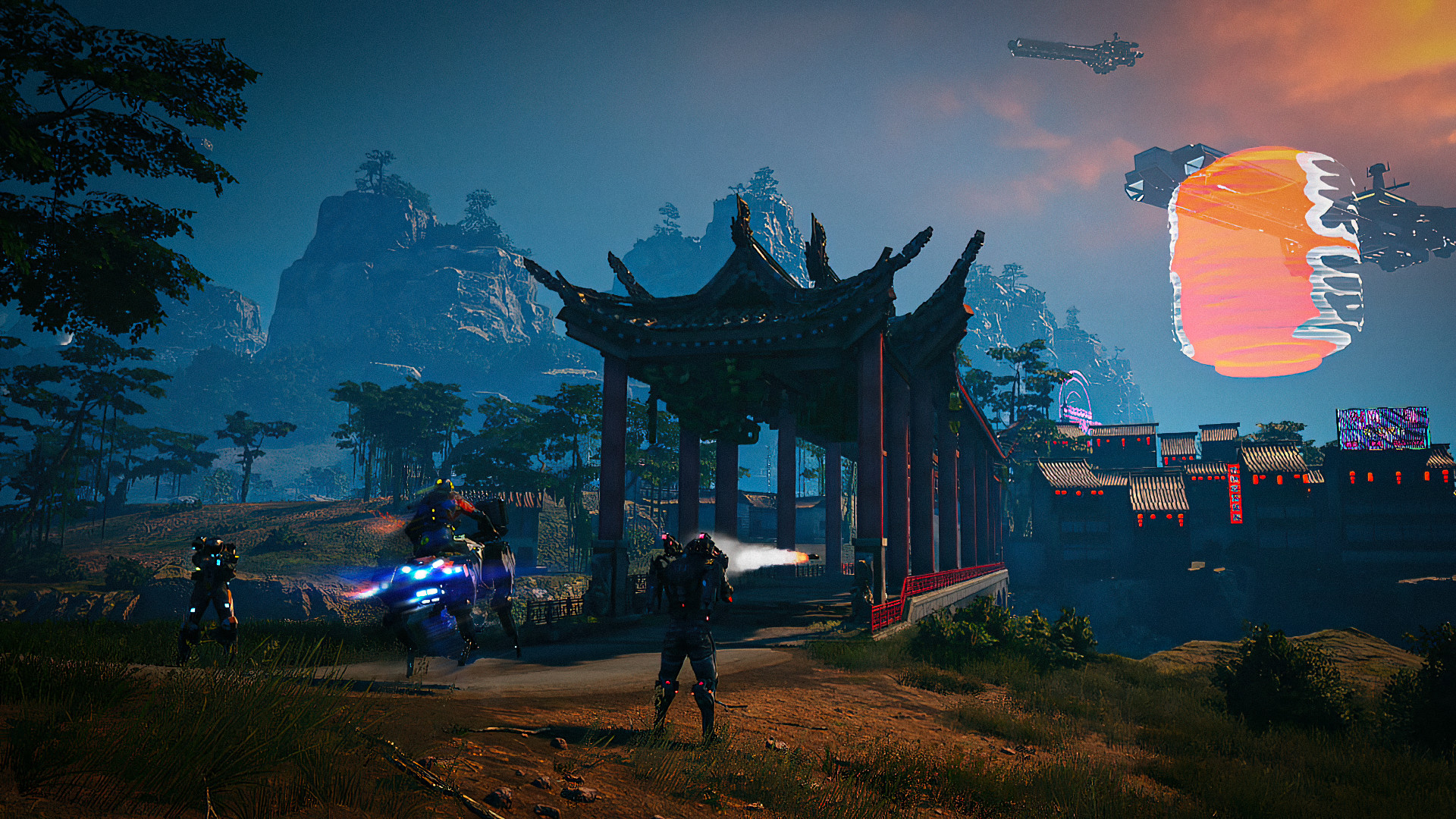 "In the early days we’ll be doing very frequent updates. Because we are in early access that means bug fixes, rapid balance adjustments and other critical issues. Once that calms down a bit, we’ve got more weapons, abilities, exosuits, new maps and even brand new game modes in the works."

Are you building LEAP as a purely multiplayer experience, or do you have plans for single player or other similar PvE content down the road as well?

We’ve actually got both PvP and PvE in the modes for early access launch. PvP, which we call Competitive, is split into a bunch of different game modes. We also developed PvE Special Operations missions, which allow you to team up with other players and cooperatively fight through hordes of enemies together, this one is actually my favourite. Special Operations are designed to scale difficulty depending on player count, so you can play it solo or with up to three other teammates.

What sort of a content rollout plan do you have for LEAP during its early access period? What should players expect in terms of the frequency and size of updates?

In the early days we’ll be doing very frequent updates. Because we are in early access that means bug fixes, rapid balance adjustments and other critical issues. Once that calms down a bit, we’ve got more weapons, abilities, exosuits, new maps and even brand new game modes in the works. On top of this, we have a full years worth of cosmetic content planned, this will let players keep their characters looking cool and fresh each week. Our update schedule as it stands today, is divided into major and minor updates. A minor update could be something like a new personal vehicle, balance adjustments or other smaller types of content. A major update would be new maps, game modes, more Special Operations scenarios, and lots more. We have an internal schedule today, but I’m sure it will change pretty rapidly once we start getting more feedback on the game.

Once LEAP is out of early access, what are your plans regarding post-launch support for the game?

By the time we exit early access, we should have a very good idea of what kind of content everyone is enjoying the most. Today, we have deliberately left those plans a bit vague because we are going to learn so much during early access. Any plans we make today for post 1.0 are likely going to change a lot. With that said, we love this game, we love working on it and we love playing it. We certainly hope to be working on this game for many years post 1.0 launch. 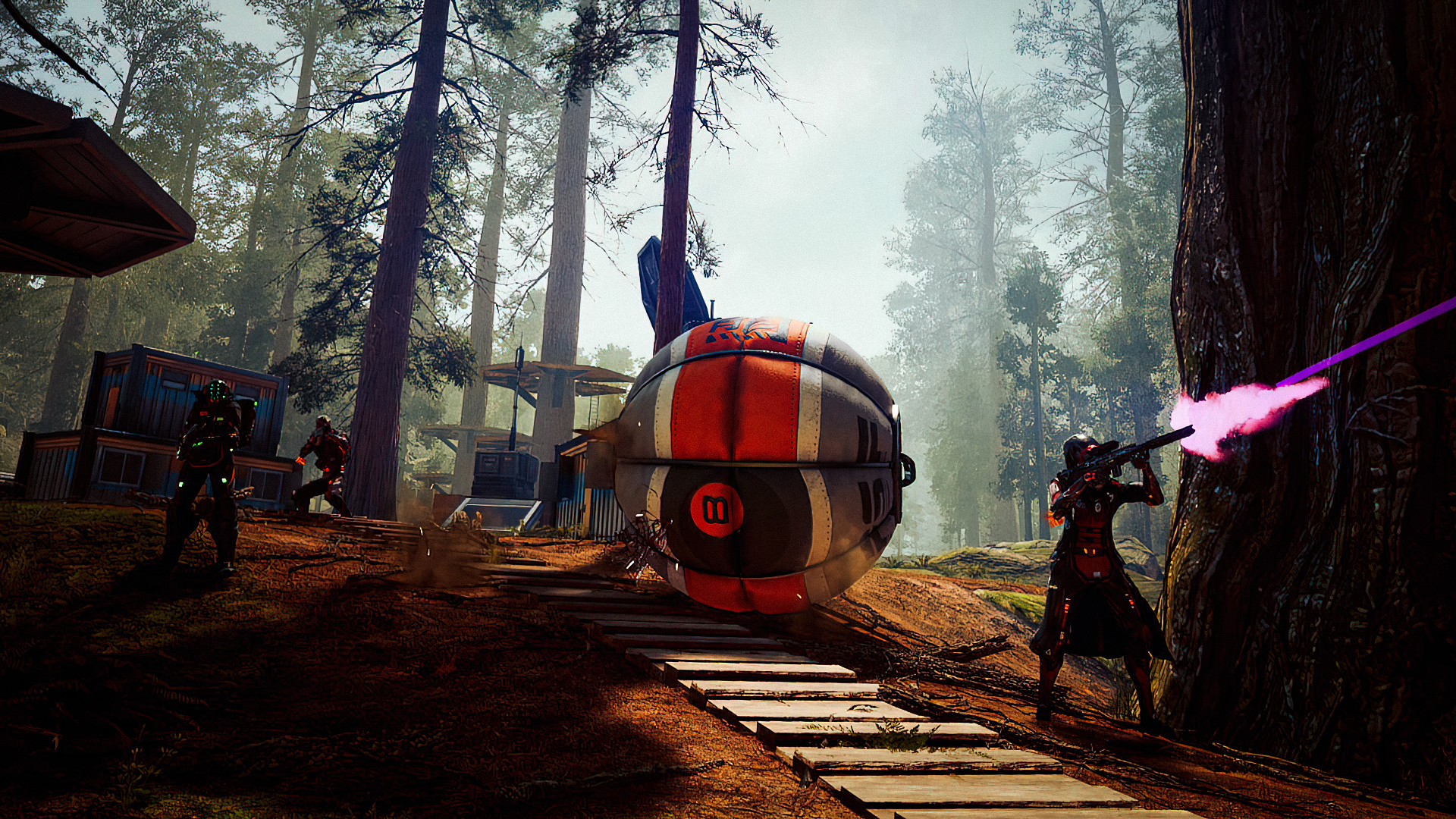 "By the time we exit early access, we should have a very good idea of what kind of content everyone is enjoying the most. Today, we have deliberately left those plans a bit vague because we are going to learn so much during early access."

How will you approach in-game monetization in LEAP?

Right now there is no in-game monetization. If you purchase the game you have the same access to all of the content as any other player, unless you bought the Founders Edition which has some exclusive cosmetic items. We’ve got an in-game store, but it uses a currently that is entirely in-game and earned through gameplay and player level. If we ever did have in-game monetization, we’d keep it to cosmetic items only. I think we’ve all seen too many bad examples of pay to win and that’s something we have zero interest in.

Do you have plans to eventually bring LEAP to other platforms down the line?

As a developer you really want to see as many players as possible enjoy the game you have worked on for so many years. So in short, definitely. We are confirmed coming to Playstation and Xbox as well, that’ll likely be closer to, or simultaneous with the 1.0 launch. Aside from those, we’ll definitely look at other platforms that make sense.