Well I was still very much active in L4D1 when L4D2 was announced. It is only a year since the last game, and the question on everyone’s minds is whether this game is worth it, after the prequel came out only 12 months ago. From any other developer, this would not have been such a big deal. But Valve, renowned for taking their time over their work brought out the second Left 4 Dead too early for some. However, don’t take this as a sign that Valve hasn’t put in a lot of effort to make this the best zombie shooter yet. Because this game is very, very good. And do you know what the best part is? It takes every part of the original game, improves it and adds a slew of new features to boot to ensure that you will be playing this game for a long time to come.

First of all, let me explain the general premise behind L4D2. You take control of one of 4 characters, who are the unlikely group of comrades fighting their way through the zombie horde with a variety of melee weapons and more conventional weapons and tools. There are 5 campaigns in the game, each with it’s own ‘wow’ factor and unique quirks. For example, Hard Rain starts by having you fighting in true L4D style going from A to B. Then, you have to go all the way back again, retracing your steps. But this time, its in a thunderstorm. Visibility is severly limited, and it is a true shock to suddenly be attacked by a group of zombies. And in The Parish, you have to make your way through a maze of fences while zombies climb over the top and onto you. It’s these kind of heart-pounding moments that will have you going back to play L4D2 again and again. 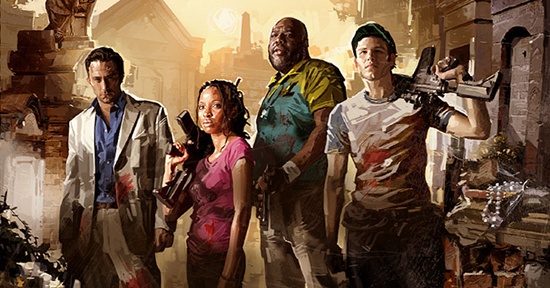 Of course, being a mainly co-op game, the amount of enjoyment you get out of it is very much dependant on the people you are playing with. No one wants to play with the high-voiced 10 year old screaming through his mic, and as such it is a far less enjoyable experience if you do find yourself playing with one of these people. That’s why L4D2 is a far better game if played with friends. It’s an exhilerating experience to sprint through the horde with 3 strangers. It’s mind blowing to do it with 3 friends. There is a single player mode, and although the bots are generally good shots, they don’t cooperate with each other in the way that real people would. They are also very passive, and tend to just follow you. Nevertheless, they are useful if you can’t fill all the spaces in a match.

Like a mentioned before, there are a ton of new features and modes that this game has to offer. While Campaign, Versus and Survival remain, Scaveneger and Realism modes are the newest additions to L4D2. Realism mode is more of a difficulty modifier than a whole new mode, but it does offer something new to the  truly insane gamers. It removes many aids that you take for granted in the Campaign, such as halos around weapons and your team mates to show where they are. While this may seem like a small difference, you will soon realise that communication is a must if you are to survive. Scavenger mode is one of the more noteworthy additions to L4D2. Like in Versus,one team takes on the role of special zombies and one team takes on the role of the survivors. However, in each Scaveneger level, there are several jerrycans of fuel scattered about which must be taken by the survivors to a generator in the centre of the level. This is important, as for each can the survivors increase their time limit by a few seconds. The aim is to stay alive for as long as possible, or retrieve all of the cans. There are a variety of tactics to use in this mode, but matches are ultimately quick and bloody. Once one team is down, the teams switch around and so on. This mode has real legs, and I can see people playing this game for a long time to come.

The other new additions to the game of course come in the form of new weapons. Melee weapons to be precise. In order for swapping out your pistol(s) you gain a melee weapon. This can be anything from a crowbar to a katana, and each has its own subtle strengths and weaknesses in range and damage. However, what everyone really wants to know about is the chainsaw. This melee weapon crowns them all, with the ability to grind up waves of infected at a chokepoint with ease. It’s only downside is that it requires fuel to run, which eventually runs out. There are some new guns as well, such as the Silenced SMG and the Desert Eagle, but these aren’t a whole lot different to the weapons you are used to from the last game. 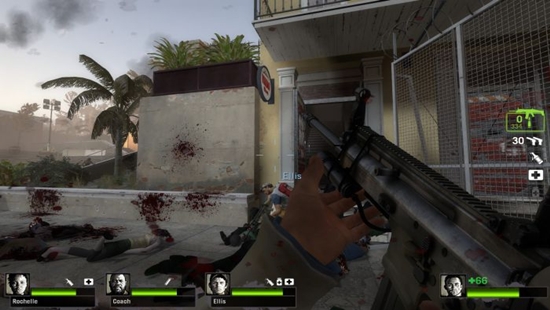 There are a variety of new weapons.

The final major new addition is the introduction of 3 new special zombies. These are the Spitter, the Jockey and the Charger. The main differences are covered here in the demo impressions, but here are the features of the new zombies once again. The Spitter shoots out piles of acid goo which will quickly reduce the health of any survivor standing in it. The Jockey, which is becoming a quick favourite with Versus players, can jump on a survivors back and make him run in any direction- including off a ledge to a quick death. The Charger is a big zombie who will charge in a straight line, taking out any survivors in his path and grabbing them and pummeling them into the ground. Throughout the campaign you will also encounter some Uncommon common infected, who require a bit of thinking to take down. I won’t ruin all the surprises for you, but an example is the zombie dressed in thick riot gear who can only be shot in the back. These help to spice up the standard waves of the Horde.

The new improved graphics are also worth mentioning here, as not only do they make the game look sharper overall, but have opened up new avenues of mutilation for the discerning survivor. Now zombies will dismember, decapitate and blow apart to the extent that you can see their spine. This is not a game for the faint of heart, but for those who don’t mind a little gore it is a visual treat. It is also worth mentioning here that this game does not require much horsepower to run; I tested it on a variety of systems and with a little fine tuning everything from the 8600MGT to the HD4850 made the game run as smooth as butter.

Overall, Left 4 Dead 2 is a worthy addition to any gamers collection, whether you own the previous game or not. If you didn’t like the fundamentals behind the last game, then L4D2 is unlikely to change your mind, but the new additions make this an even more complete and feature-rich package than before. Whether you are a L4D loyal fan or novice, you owe it to yourself to pick up this excellent shooter.

Left 4 Dead is back. And it's going to be taking up a lot of your time.

A copy of this game was provided by developer/publisher for review purposes. Click here to know more about our Reviews Policy.
Tagged With: Left for Dead 2, pc, xbox 360