The TT conveyor belt keeps pumping out the games.

Posted By Shubhankar Parijat | On 26th, Jun. 2018 Under Article, Reviews

LEGO The Incredibles is exactly the kind of game you think it is. Developers Traveller’s Tales established a formula many years ago that they’ve then stuck with for the next twenty games or so, and it’s been successful enough that they haven’t felt the need to deviate much. The same is true this time around as well, which, honestly, is something most people would be expecting when going into the game. LEGO The Incredibles is powered by the same strengths that strengthen other LEGO games, while it is also bogged down by the very same hindrances that fans of the series would be very familiar with. 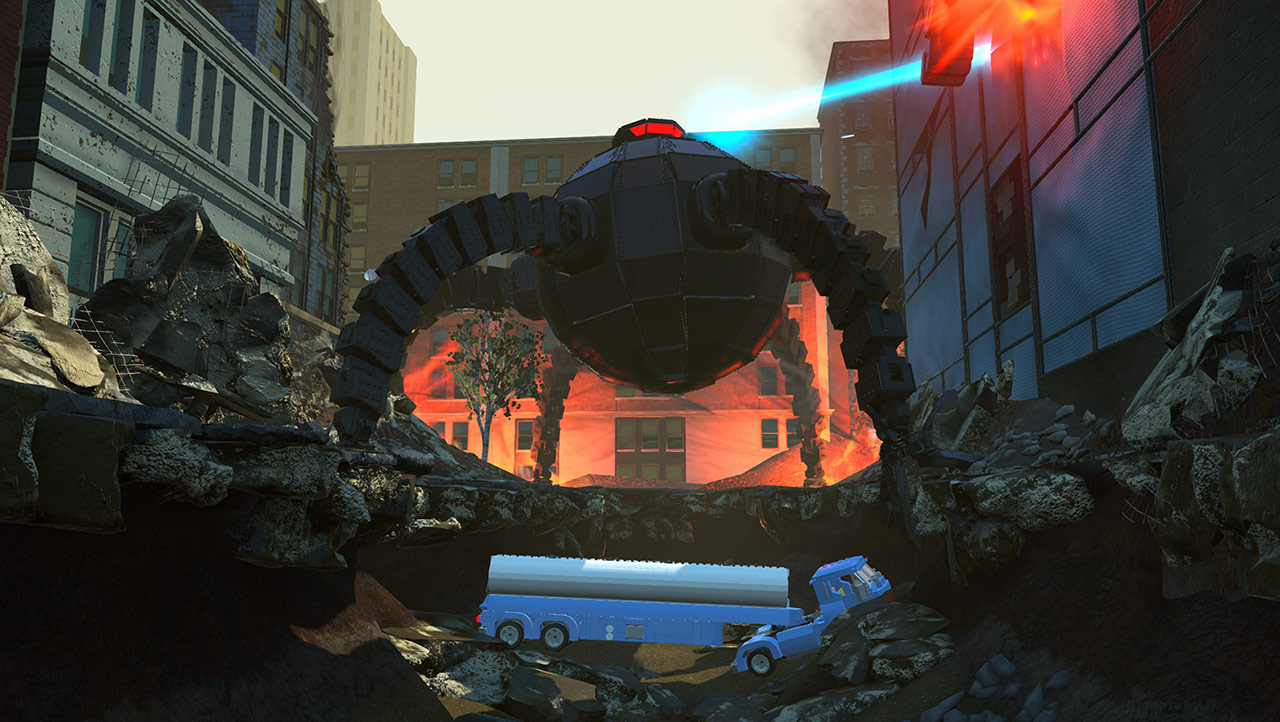 "LEGO The Incredibles is powered by the same strengths that strengthen other LEGO games, while it is also bogged down by the very same hindrances that fans of the series would be very familiar with."

LEGO The Incredibles is based on both of Pixar’s Incredibles movies, with the first half of the game telling the story of the recently released second film, and the second half of the game being based on the 2004 original. While this structure makes sense from the point of view that this game’s primary purpose is to serve as a tie-in to the more recent film, it does throw the pacing off a little bit. It’s understood that you don’t really play LEGO games for their narrative or for their character development, but going from the end of the second film to the beginning of the first one feels a bit off nonetheless.

But as I said, those issues are easy to push aside when you’re playing a LEGO game, because that’s not what any of us is really here for. The game offers the same bombastic, adrenaline-fuelled and instantly accessible set pieces you’d expect it to, ranging from chasing a hovertrain on a motorbike through the rooftops of a city to fighting hypnotized and brainwashed enemies inside of a burning airplane. These set pieces are separated by sections of gameplay that you’d be familiar with even if you’ve played a single LEGO game, involving cursory combat, solving environmental puzzles and breaking things and collecting studs to progress.

All of that works the way you would expect it to. It’s simple yet varied enough to not get boring or monotonous, and it is structured in such a way that it doesn’t feel like it’s a cakewalk, but never feels overbearing or stressful. LEGO games are designed to be the video game equivalent of comfort food, demanding next to nothing from the players themselves, and providing constant dozes of visual flare, silly and light-hearted humour, and enjoyable action in return, and that is exactly what Incredibles does as well. Each of its characters has their own unique abilities and powers, and switching through them to find the one that can solve a particular environmental puzzle feels familiar, yet enjoyable. Combat is very simple, rarely ever requiring more than the most basic attention you can give, centred mostly around just one single button. 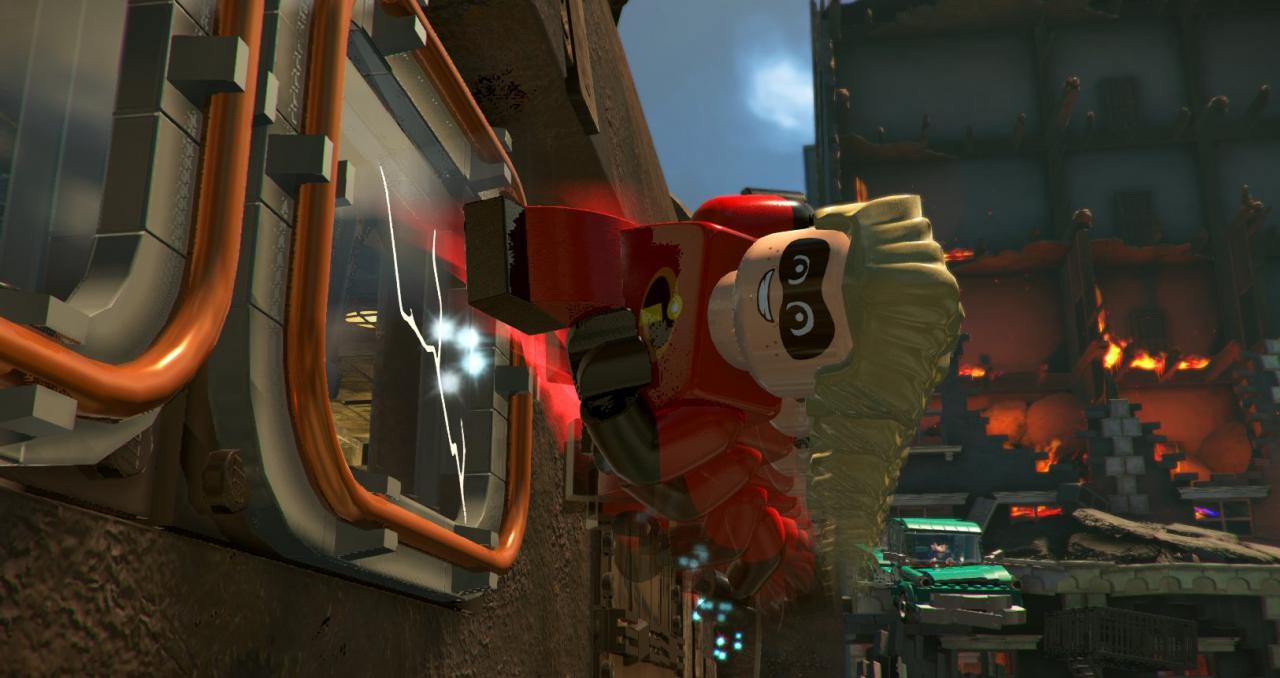 "LEGO games are designed to be the video game equivalent of comfort food, demanding next to nothing from the players themselves, and providing constant dozes of visual flare, silly and light-hearted humour, and enjoyable action in return, and that is exactly what Incredibles does as well."

The ability to switch between characters in the middle of combat injects some nice variety, while the addition of mechanics such as super moves mixes things up a bit as compared to previous LEGO games as well. That said, the controls can often feel sticky or unwieldy, especially in the middle of hectic situations like combat encounters or fast paced set pieces. In crowded encounters, the best option is usually to resort to button mashing, since the game doesn’t read which enemies you want to target as well as it should. Similarly, in sections where you’re driving vehicles, such as during set pieces or during open world exploration, the vehicles don’t handle very well, and are either overly responsive in terms of handling, or overly heavy.

Beyond that, open world exploration is usually plenty of fun. There are tons of collectibles and side quests scattered throughout the game’s two open world hubs, with the Crime Wave side missions being some of the most enjoyable content in the entire game, and this optional content and exploration can easily double the amount of time you will spend with LEGO The Incredibles. The simple act of roaming around and breaking stuff in the open world environment can be a lot of fun, and also a great way to farm studs should you ever need to. What also helps is that you can explore these areas as any of the several characters in the game’s roster.

And gratefully, there are a large number of characters present in the game. And not just from The Incredibles’ roster- you’ll be seeing characters from other Pixar properties as well, from Toy Story to Finding Nemo, and these also contribute greatly to injecting plenty of variety in the game. The fact that these are unlockable through virtual packs, with all the addictiveness and potential enjoyment of loot boxes but with none of the baggage of microtransactions that usually goes with them, serves to make their addition that much more of a bonus. I have no doubt that scores of younger players will spend countless hours hunting down each and every one of these virtual packs. 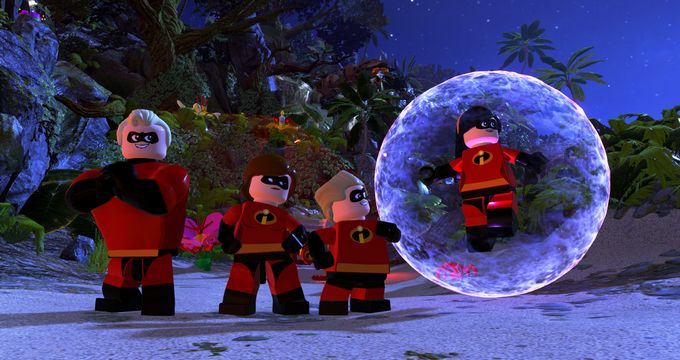 "The optional content and exploration can easily double the amount of time you will spend with LEGO The Incredibles."

What all of that means is that I enjoyed my fifteen or so hours with LEGO The Incredibles quite a bit. I knew, going into the game, exactly what to expect, and I wasn’t disappointed. The controls are an issue, as they have been in this series for a long time, while the occasionally sticky camera can also often be a source of annoyance. The engine these games are built on is also holding up fairly well, though in my playthrough there were a few noticeable instances of frame rate drops. But all these flaws, as well as all of the game’s strengths, are things that are expected. It’s fair to say that Traveller’s Tales can’t stick with this formula forever- they definitely need to make changes and improvements if they want to keep pumping out games that satisfy the current demands of quality. But as it stands right now, they’re continuing to do – at the very least – a serviceable job.

Traveller's Tales' latest is exactly what you expect it to be- for now, that's still a good thing.

A copy of this game was provided by developer/publisher for review purposes. Click here to know more about our Reviews Policy.
Tagged With: lego the incredibles, nintendo switch, pc, ps4, Traveller's Tales, TT Games, Warner Bros. Interactive Entertainmen, Xbox One