A little fact for those who are interested. In Japanese culture if you are offered a round on a karaoke machine, it is generally seen as rude to decline. In fact you’d be hard-pressed to find any populated area of Japan that doesn’t have a karaoke bar or seven. Meanwhile over here in the west, the cultural significance of karaoke is much, much less. Usually belting your heart out in front of a plastic microphone is reserved for exceptionally large groups or when you’re very drunk. Sometimes both at the same time. If you feel you might fit into one of these categories in the near future and want to screech out some hits from the 80’s on your 360, then Lips: I love the 80s might just be the game for you. The game comes bundled with two wireless mics, but I was not able to obtain these for review purposes and wound up using an old rock band mic that was lying around. Thankfully you’ll be glad to know that standard USB microphones can be used as well. 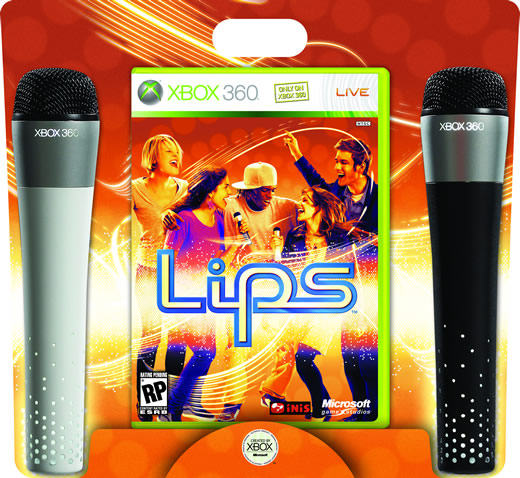 Lips comes bundled with two wireless mics. But you can also use a normal USB alternative if you prefer

If you’ve done karaoke before then you’ll know exactly what to expect in Lips. If you haven’t you basically see the words on screen for your selected song and sing along. As you sing a little bar will tell you what pitch you’re singing at, and you can see from the height of the next few words whether your pitch needs adjusting. It’s a simple formula that you’ll either love or hate depending on your fondness for singing. Thankfully the basic mechanic is done well and the pitch detection, even on an unofficial microphone, is solid and responsive. Unfortunately all is not perfect with the core mechanic, as it can often be hard to see the line indicating your current pitch. This isn’t much of an issue once you know what to look out for, but I spent my first few songs not seeing it and singing blind, which lead to low scores and frustration all-around.

As you continue screaming out your track, various medals are awarded for a variety of skills including consistency, rhythm, vibrato etc. Your score gets added up once you’ve finished and you get immediately shown the top 100 scores for that song on the xbox live leaderboards and how you compare to them. If you’re one with your competitive side, you’re going to find a lot to enjoy about the simplicity of Lips and its leaderboards and rewards system.

It’s nice to see that the game attempts to keep those who aren’t singing occupied as well. At any time you can pick up a controller and hit various buttons to make crowd noises, hand claps and other accompanying sounds. I’m not sure how long this could keep you occupied for but it’s a fun little inclusion, even if you just spam the buttons to try and distract your friends. You can also shake the mic during passages that lack vocals to make your on-screen avatar dance, but this feature wasn’t available on my USB mic so I can’t attest to the quality of this feature. Whilst there seems to have been some effort to include group play it seems odd that there are no difficulty modes to choose from. Timid vocalists may be put off by the lack of an easy mode, which is a shame as playing Lips is a case where more is certainly merrier. 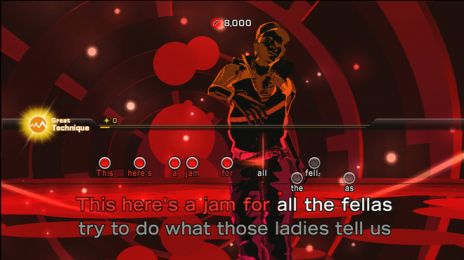 It’s karaoke… What more can you say?

The set list is an important part of any music game, but more-so with Lips than other titles. There isn’t much of a way to preview the tracks so you can’t really sing them very competently without knowing them already. Thankfully the tracks offer a decent cross-section of 80s pop music, and anyone who is a fan of music from the era should be familiar with most of the songs. I was also glad to see a variety of genres included from punk to techno and with forty tracks included on the disc you’ll be finding a lot of material to sing. If that wasn’t enough then you’ll be glad to know that there are a lot of tracks available to add to your lips library from xbox live. At the time of writing it was nearing 300 and this number is sure to increase over time.

If that’s still not enough musical goodness for you then you can always play songs from a USB device or media centre compatible computer. It’s a nice attempt to allow the use of your own music collection, but it offers little more than the audio coming out of your TV speakers. It does try to add up a score, yet it seemed a bit dubious to me as I kept racking up points even when the vocals had stopped. Just make sure you know the track well as it’s naturally unable to give you the lyrics for your own music.

In terms of game modes, you’ll find two players are well catered for with a plethora of co-op and competitive singing modes. Needless to say you’ll find many enjoyable ways to sing in harmony or settle any scores. The problem arises in the solo modes. Without any story or campaign modes you’ll find yourself just singing the songs over and over. In comparison to the enjoyable career modes seen in the Rock Band and Guitar Hero series, it’s a little weak that Lips offers little sense of accomplishment for those who wish to sing solo.

Visuals are never really the strong point of the music game genre and Lips is no exception. That said the graphics, whilst technically unimpressive are bright and colourful and it’s always satisfying to see your avatar boogie along and the bright colours flash on screen. That’s about all there is to it however. One thing that did surprise me is that your in-song background is completely customizable and you can actually use the official music videos, which is a nice touch. 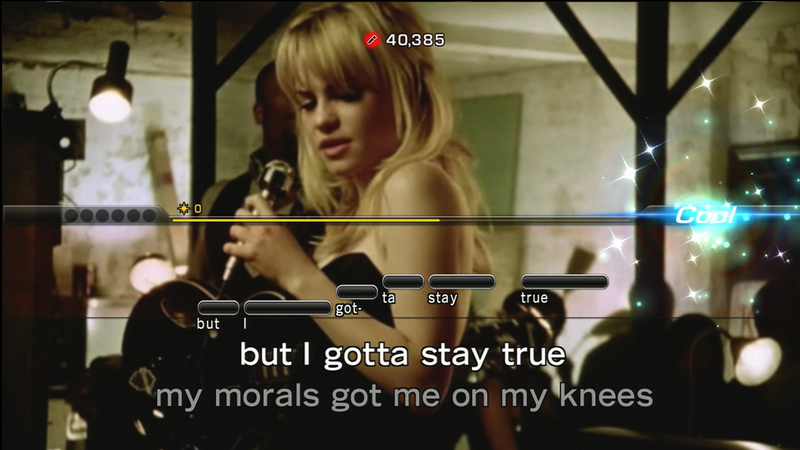 You can sing along to the official music videos, which is a nice touch.

For those of you geared up for some vocal action, you’ll be glad to know that Lips has enough content to keep you going till you lose your voice. There are a lot of songs going on here and you can always sing from your Ipod or download new tracks if you get bored. The game also tends to make its own fun when you’ve got multiple players, so Lips would be a blast at parties. Leaderboards will also keep the majority retrying in order to squeeze those extra few points out of each track. Unfortunately the achievements are limited as the 80s disc on its own can’t net you the 1000 gamer-score for Lips, which is a little cheap considering how Microsoft made such a huge deal at the 360’s launch about how every game disc would have 1000 gamer-score.

If you like Karaoke or singing in the shower then Lips is the sort of game for you. If you have lots of friends who also enjoying stretching the vocals chords then what are you waiting for? Just buy it already! That said, whilst Lips is a lot of fun, the 80s set list and the need to know the songs before hand makes the game lacking in its appeal to a wider audience. Particularly in comparison to the Rock Band and Guitar Hero franchises. Said franchises also include vocals as well as guitar, bass and drums, but Lips is a cheap and cheerful alternative provided you can get on well with the songs on offer. A fun game, but only for a select few. Make sure you investigate the set list on offer before buying.

Not much to do on your own, It's just karaoke with no whistles and bells

Final Verdict:
GOOD
Lips is karaoke on the xbox. Pure and simple. If you and your mates want sing along to the guilty pleasures of the eighties then you won't go wrong with this one
A copy of this game was provided by Developer/Publisher/Distributor/PR Agency for review purposes. Click here to know more about our Reviews Policy.