Everything you need to know about Long Gone Days.

Long Gone Days is a unique RPG with visual novel elements being developed by an independent creator known as Camila Gormaz and her small studio BURA. It began life as an RPG Maker 2000 project back in the conceptual stage but the huge success of a demo build of the game drove a successful Indiegogo campaign that raised enough to create a full title, now set to release February 18, 2018. The game will release at first with Windows PC, Apple MacOS and Linux OS compatibility, with other systems open to consideration later on.

The concept of Long Gone Days was first played with in 2003 by creator Camila Gormaz in the RPG Maker 2000 toolkit. The characters would be developed over 12 years inside Gormaz’s mind and she would begin development in earnest sometime in 2015. Gormaz would release a demo of the title on RPG Maker forums and itch.io on May 13, 2016 and the OSX port of the demo became available on July 14.

The game was posted to Steam Greenlight on May 25, 2016 where it reached 9th place before being approved by the community driven service. It will be available on a variety of other services as well.

The demo became popular and received incredibly glowing praise from users, with a 5/5 rating on itch.io. The success of the demo spurred Gormaz to launch a crowdfunding campaign on July 11, 2016 to Indiegogo, which reached its funding goal with $21,300 USD just one month later on August 11, 2016. One of the questions answered during the campaign was how long the game will be, to which it was revealed that a single play through should last roughly 4 to 5 hours, but the game has two distinct endings to achieve. 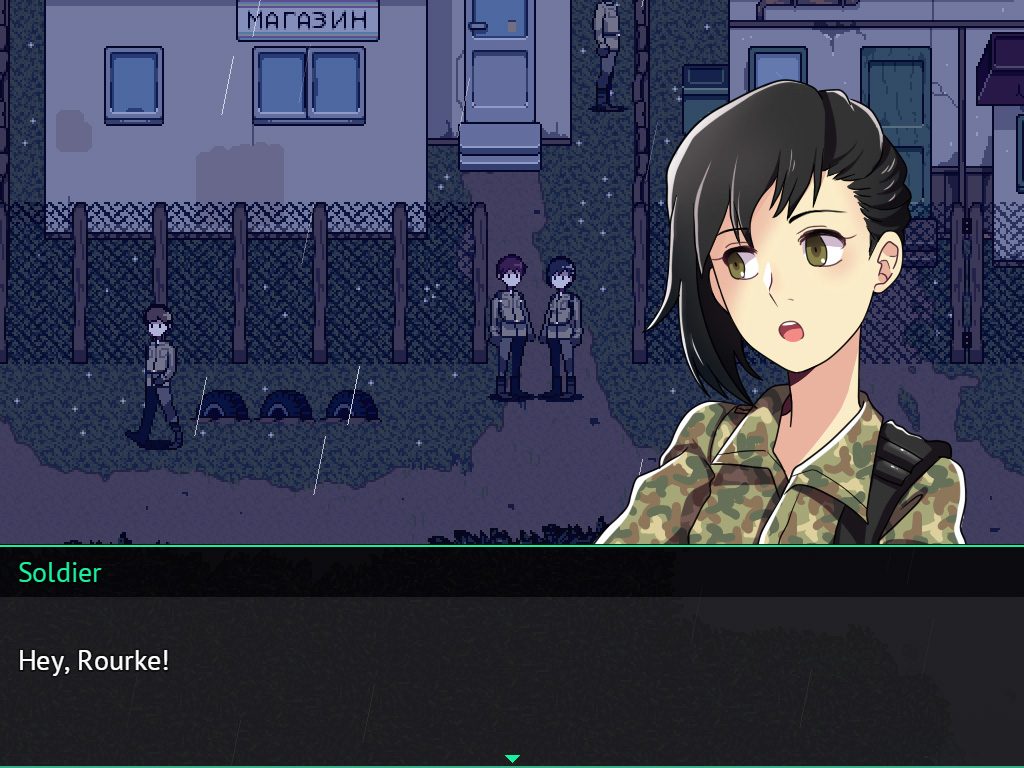 Something of a mixture of a wartime thriller and the Metro series, players take control of Rourke, a hot-headed sniper from the unofficial underground country known as “The Core”. The Core is a dystopian regime where every single person is trained for a singular job from birth and very little else. Rourke was of course, raised to be a sniper. However on his first ever deployment where he’s sent with little warning to aid Polish forces in Kaliningrad, Rourke discovered a horrifying truth about his mission and The Core’s true aims after he unknowingly kills civilians in a false flag operation.

Leaving behind everything he has ever known he allies with with a combat medic known as Adair. Rourke decides that he cannot partake in the war crimes of The Core and desserts his post. Without much of a clue of the direction he hopes to take to do it, the two become hunted deserters, enemies of The Core and hope only to prevent the war that their homeland wants to start. The two join up with a shelter who fights from the shadows shortly before the demo cuts off. 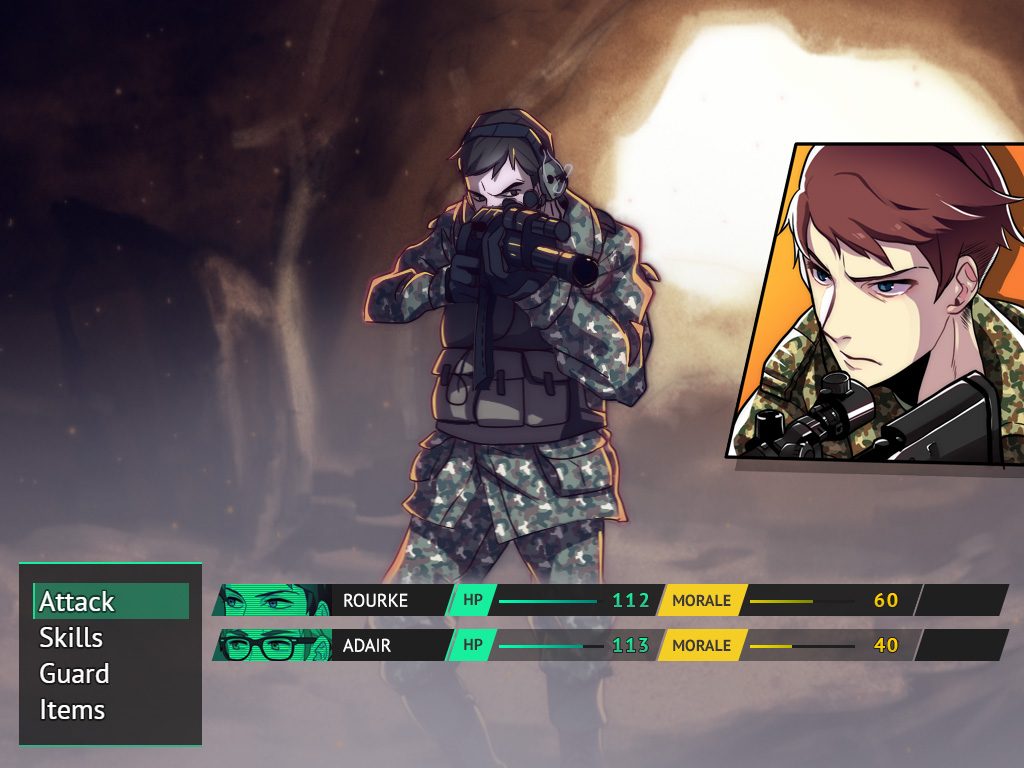 Long Gone Days is ostensibly an RPG with some visual novel elements, but very unique in its mechanics. The story is similar to modern day plots, and does not feature supernatural or fantasy elements like magic. Turn based RPG battles allow players to decide where to aim on a target, all of which have their own likelihood of being hit and effects for doing so. Your party is driven by their morale, which can change  based on dialog choices throughout the game and informs how they do in battle. A character without any morale will lose the will to fight and will be unable to engage in battle. As to exactly how to keep your party motivated, that varies from character to character, and the player will need to get to know them personally to do it effectively.

Aside from the turn based battles, a sniper mode feature is also available which asks the player to locate the correct targets and perform reconnaissance. The makeup of the team for each mission will matter as well, as each member has unique skills that make them shine for specific things and less adept in others. As the story takes place in a world not unlike our own, the NPCs will speak the native language of their country, demanding unique character classes called interpreters in order to act effectively.

A limited number of characters have been featured in the demo or profiled in prerelease media, and of those who have been profiled, there’s stunningly little for them. Nevertheless, that’s what updates are for and we’ll run down what we have.

The hero of the story is Rourke, and he’s a hard headed 22 year old man born and raised in The Core to be a deadly sniper. He has never been on a deployment before the events of the story, shadowing the other snipers instead as he trained. While he comes across as disinterested and self absorbed, he’s mostly bored. His deployment comes as a chance to escape his monotonous life, but when he realizes the horrors of his mission, his moral compass leads him to abandon his post without much hesitation.

He meets the serious and stoic combat medic Adair during his deployment. He’s a caring young man who unintentionally comes off rude because of his lack of humour. Underneath he’s a straightforward, honest guy who deeply cares about his fellow man.

Lynn is a 23 year old woman living in Kaliningrad with a great smile that keeps the team positive. She’s an expert at bomb crafting and a strategist who arrived to the shelter a few months before Rourke. She lives with a pacifistic older man, 29 year old Ivan Cherevatenko. He refused to partake in the fighting, but uses his skills as an English-Russian translator to help the party on their missions and teaches them about the world around them.

There is said to be a large cast of party members and a wide variety of characters to engage with in the full game, and we’ll be expanding this section once we know more about them.